Like many people, in terms of socializing, I prioritize making time for my closest friends and family. When it comes to reaching out to people I don’t know as well, I have a harder time and often find myself reluctant to engage—maybe because I’m introverted or just plain busy. 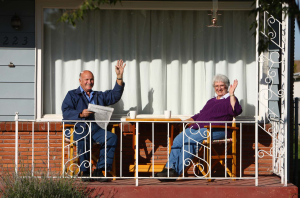 This could be a big mistake, though, according to a new study. Having a variety of different types of social interactions seems to be central to our happiness—something many of us discovered firsthand during the pandemic, but may already have forgotten.

In a series of surveys (done pre-pandemic), researchers looked at how having a socially diverse network related to people’s well-being. Just to be clear, they weren’t looking at racial, ethnic, or gender diversity, but how much people interacted with different types of social contacts—friends, family, colleagues, neighbors, classmates, community members, etc.

In one survey, 578 Americans reported on what activities they’d been engaged in, with whom, and for how long over the past 24 hours, while also saying how happy and satisfied with life they were. The researchers then gave them a score for “social diversity” based on the variety of social contacts they’d had and the length of time spent with each type of contact.

After analyzing the results, they found that people with more diverse social networks were happier and more satisfied with life than those with less diverse networks—regardless of how much time they’d spent socializing overall. This pattern held even after taking into account things like a person’s gender, age, employment status, and other potential influences of happiness.

Having a wider set of social contacts seems to be important for happiness, says lead researcher Hanne Collins of Harvard Business School.

“The more you can broaden your social portfolio and reach out to people you talk to less frequently—like an acquaintance, an old friend, a coworker, or even a stranger in the grocery store—the more it could have really positive benefits for your well-being,” she says.

To further test this idea, she and her colleagues looked at large data sets from the American Time Use Survey (which provided detailed information from over 19,000 Americans about what activities they engaged in during a typical day) and the World Health Organization’s Study on Global Aging and Adult Health (which did the same for 10,447 respondents from China, Ghana, India, Mexico, the Russian Federation, and South Africa).

In both cases, they found that when people had a broader range of social interactions, they experienced greater happiness and well-being—including better physical health. These gains in well-being went above and beyond gains related to how active people were or what country they were from or other demographics—meaning the results seemed to apply to people from all stations of life and from many cultures.

“Across many measures, many populations, and many different studies, we’re finding the same kind of positive association between a greater social portfolio and well-being,” says Collins.

In this type of analysis, though, it’s hard to tell whether social diversity leads to happiness or if happier people just attract more diverse social contacts. To try to get at that, Collins and her colleagues did another analysis, using data from a mobile app that 21,644 French-speaking people used to report on their daily social activities and happiness.

There, they found that when someone experienced greater-than-average social diversity one week, they were happier that week and the week after—independent of how active or social they were overall. This finding probably jives with people’s own experience during the pandemic, Collins adds.

“The pandemic narrowed people’s social portfolios, in terms of having different relationship partners to talk to, and they missed that wider network,” she says. “We benefit from having access to more distant others.”

Why is that? Other research supports the importance of “weak ties” in our social networks—and how interacting with a stranger can be more pleasurable than we predict. It could be that being with different people elicits different kinds of emotions, says Collins, and that emotional variety may be a driving force in our happiness.

Whatever the case, Collins hopes her research will spur people to expand their social networks when they can. She suggests reaching out to old friends, joining a class, having an extra meeting with a colleague to touch base, or chatting with the grocery store cashier. Especially after going through the isolation imposed during the pandemic, she says, getting back to a wider set of social interactions could really help improve people’s well-being.

“As we try to find out what a ‘new normal’ looks like, recovering our diverse social portfolios may be really impactful for people,” she says. “Just trying to be conscious about who you’re talking to and making the effort to foster moments of connection with people with less obvious access to your life could be powerful.”