In the space between strangers and friends, there are acquaintances. They represent the gray zone of relationships: Does she want to get to know me better? Would I even enjoy spending more time with them? Without any effort, they can easily slide back into “people we used to know.” Or with a little effort, they could become real friends.

Can you know if an acquaintance is worth that effort? Two new studies suggest that when we think about whether to connect with acquaintances, our intuitions are often off. And because of that, we might be missing out on opportunities for happiness and deeper relationships.

Go ahead and reach out

In the first series of studies involving over 4,500 people (mostly in the U.S.), participants were invited to write notes checking in on someone they were friendly with but hadn’t seen in a while. The researchers surveyed the note writers on how much they thought this gesture would be appreciated—and then the researchers asked recipients to rate how much they did, in fact, appreciate the note.

(In some studies in this series, participants either recalled a time in their life when this happened, or imagined it happening, either as the person reaching out or the person being reached out to.)

Overall, they found that people reaching out reliably underestimated how much their gesture would be appreciated.

“We hope that our findings will encourage people to reach out to their social contacts more often, ‘just because,’” write the University of Pittsburgh’s Peggy J. Liu and her coauthors. “Such small gestures are likely to be appreciated more than people predict.”

Why don’t we realize how delightful it is when an acquaintance checks in with us?

One reason, according to the surveys, is because we aren’t thinking about how surprising it is to hear from someone we haven’t talked to in a while. We’re especially oblivious to how appreciated it is in relationships where a random hello is more surprising—like people you are less close with.

A second series of studies found that we may also misjudge the benefits of continuing a conversation with someone we just met—this time, the benefits to ourselves. 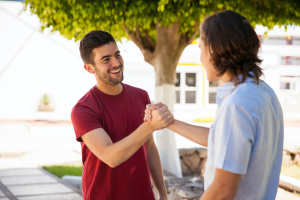 In these experiments, more than 1,000 people (who hadn’t met each other) were paired up together for conversations. After talking for a while, they rated how much they would enjoy talking further. Then, some of them kept talking and rated how much they actually enjoyed the continued chat, stopping at various intervals to make more ratings and predictions.

Overall, the researchers found that people consistently underestimated how enjoyable it would be to continue an exchange with a new acquaintance. While people predicted these chats would get less enjoyable over time, they didn’t—and sometimes they even became more pleasant.

Part of the reason for this oversight, according to surveys, is that we don’t realize how much we will have to talk about with a new person. We think the conversation might fizzle out over time, but that typically doesn’t happen.

“All close friendships begin with a simple conversation between strangers,” write Northwestern University’s Michael Kardas and his coauthors. “People may miss opportunities to fully realize these benefits because they expect their conversations with new acquaintances to grow dull more quickly than they actually do.”

Underestimating the value of connection

This matters because, as Kardas and his coauthors found in a final experiment, it means that we don’t make the best choices for our well-being.

Here, participants were paired up for five minutes of conversation, and then noted how much longer they’d like to keep talking (up to 30 minutes). Some were allowed to stop after that time and sit quietly, while others were instructed to talk for the full 30 minutes.

While this scenario feels a little artificial, it’s akin to striking up a conversation with someone on the bus, or at a party. After a brief lull, do you ask them another question?

In the experiment, people who had to keep talking (whether they wanted to or not) had a more enjoyable time. Once again, everyone seemed to be underestimating how fun it would be to engage with a new connection. They also overestimated how tiring it would be, and how quickly they (and the other person) would lose interest in the conversation.

These studies go along with other research suggesting that we don’t have a good sense of how pleasurable it is to connect—for everyone. For example, we underestimate how much strangers like us and enjoy our company, how interested strangers will be in talking with us on public transit (and how positive the experience will be), and how much strangers want to engage in deep conversation with us.

So, how do we overcome these mistaken beliefs? The first step is to be aware of them. Then, for example, we can remember how pleasantly surprising it is to hear from someone we haven’t spoken with in a while. Or we can think in advance about the topics we’ll talk about with a new acquaintance, so we aren’t worried about running out of things to say.

“Simple reach-outs may serve not just to maintain relationships but to strengthen them as well,” write Liu and her coauthors. If we put ourselves out there and keep the conversation going, or take the initiative to reconnect, we might just end up making a friend.