We are pleased to present an excerpt from Adam Grant’s new best-selling book, Give and Take: A Revolutionary Approach to Success. Grant is an organizational psychologist at The Wharton School, where he has studied why some people become successful while others languish. His answer is surprising: The people most likely to rise to the top are often those who give the most to others—people Grant calls “givers,” as opposed to the “takers” who try to get as much as possible from others and the “matchers” who try to give and take in equal amounts.

Here are 10 research-tested actions you can take to become a successful giver at your work or in your life. 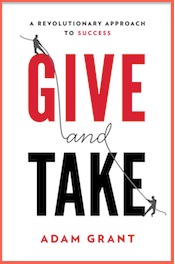 Reprinted by arrangement with Viking, a member of Penguin Group (USA) Inc. from GIVE AND TAKE by Adam Grant. Copyright © Adam Grant, 2013.

1. Test Your Giver Quotient. We often live in a feedback vacuum, deprived of knowledge about how our actions affect others. So to help you start stepping up your giving, I’ve designed a series of free online tools that you can use to track your impact and assess your self-awareness. Along with filling out your own survey, you can invite people in your network to rate your reciprocity style, and you’ll receive data on how often you’re seen as a giver, taker, and matcher.

2. Run a Reciprocity Ring. What could be achieved in your organization—and what giving norms would develop—if groups of people got together weekly for 20 minutes to make requests and help one another fulfill them? This is a “Reciprocity Ring,” and you can learn more about how to start one in your organization by visiting Cheryl and Wayne Baker’s company, Humax, which offers a suite of social networking tools for individuals and organizations. They’ve created materials to run a Reciprocity Ring in person and a Ripplleffect tool for running it online. People typically come together in groups of 15 to 30. Each person presents a request to the group members, who make contributions, using their knowledge, resources, and connections to help fulfill the request.

3. Help Other People Craft Their Jobs—or Craft Yours to Incorporate More Giving. People often end up working on tasks that aren’t perfectly aligned with their interests and skills. A powerful way to give is to help others work on tasks that are more interesting, meaningful, or developmental. In 2011, a vice president named Jay at a large multinational retailer sent emails to each of his employees announcing a top-secret mission, with details to be shared on a need-to-know basis in one-on-one meetings. When employees arrived individually for the meetings, Jay asked them what they would enjoy doing that might also be of interest to other people. He then sent them out into the company to pursue their mission with three rules: It has to (1) appeal to at least one other person, (2) be low or no cost, and (3) be initiated by you.

In the secret missions, Jay encouraged his employees to engage in job crafting, a concept introduced by Amy Wrzesniewski and Jane Dutton, management professors at Yale and the University of Michigan, respectively. Job crafting involves innovating around a job description, creatively adding and customizing tasks and responsibilities to match personal interests and values. A natural concern is that people might craft their jobs in ways that fail to contribute to their organizations. To address this concern, Amy, Justin Berg, and I partnered with Jennifer Kurkoski and Brian Welle, who run a people and innovation lab at Google. In a study across the United States and Europe, we randomly assigned Google employees working in sales, finance, operations, accounting, marketing, and human resources to a job-crafting workshop. The employees created a map of how they’d like to modify their tasks, crafting a more ideal but still realistic vision of their jobs that aligned with their interests and values. Six weeks later, their managers and coworkers rated them as significantly happier and more effective.

To help people craft their jobs, Justin, Amy, and Jane have developed a tool called the Job Crafting Exercise. It’s what we used to conduct the Google workshops, and it involves creating a “before sketch” of how you currently allocate your time and energy, and then developing a visual “after diagram” of how you’d like to modify your job. The booklets can be ordered online and completed in teams or individually to help friends and colleagues make meaningful modifications to their jobs. 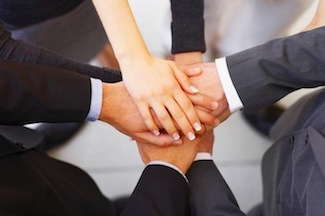 4. Start a Love Machine. In many organizations, givers go unrecognized. To combat this problem, organizations are introducing peer recognition programs to reward people for giving in ways that leaders and managers rarely see. A Mercer study found that in 2001, about 25 percent of large companies had peer recognition programs, and by 2006, this number had grown to 35 percent—including celebrated companies like Google, Southwest Airlines, and Zappos.

Linden Lab, the company behind the virtual world Second Life, developed a fascinating approach called the Love Machine. In a high-tech company, many employees aim to protect their time for themselves and guard information closely, instead of sharing their time and knowledge with colleagues. The Love Machine was designed to overcome this tendency by enabling employees to send a Love message when they appreciated help from a colleague. The Love messages were visible to others, rewarding and recognizing giving by linking it to status and reputations. One insider viewed it as a way to get “tech geeks to compete to see who could be the most helpful.” Love helped to “boost awareness of people who did tasks that were sometimes overlooked. Our support staff, for instance, often received the most Love,” says Chris Colosi, a former Linden manager.

To try out the Love Machine in your organization, look up a new electronic tool called SendLove. It’s available from LoveMachine, a new start-up that will first have you choose a recognition period for your team’s Love messages. Team members can send each other short messages recognizing giving, and the messages are all publicly visible.

5. Embrace the Five-Minute Favor. Ask people what they need and look for ways to help at a minimal personal cost, such as giving honest feedback and making an introduction. Here’s a simple exercise to get started as a connector. Start by going through your Rolodex, LinkedIn, or Facebook network. Identify pairs of people who share an uncommon commonality. Then, pick one pair a week and introduce them by email. You might also reconnect with dormant ties—not to get something, but to give. Once a month, reach out to one person with whom you haven’t spoken in years. Find out what they’re working on and ask if there are ways that you can be helpful.

6. Practice Powerless Communication. Becoming a giver often requires a change in habits—from talking to listening, self-promoting to advice-seeking, and advocating to inquiring. Jim Quigley, a senior partner at Deloitte who previously served as CEO, decided to work on his powerless communication. He set a goal in meetings to talk no more than 20 percent of the time. “One of my objectives is listening. Many times, you can have bigger impact if you know what to ask, rather than knowing what to say. I don’t learn anything when I’m speaking. I learn a lot when I’m listening,” Quigley told me. As he shifted from answers toward questions, Quigley found himself gaining a deeper understanding of other people’s needs. “It doesn’t come naturally to everyone, but it’s a habit, and you can form that habit.” For more on the power of powerless communication, visit the blogs by Susan Cain, author of the recent book Quiet, and Jennifer Kahnweiler, author of The Introverted Leader.

7. Join a Community of Givers. To find other givers, join a Freecycle community, where you can give away goods and see what other people need. Another inspiring community of givers is ServiceSpace, the home of a series of Giftivism initiatives started by Nipun Mehta. Headquartered in Berkeley, California, ServiceSpace has over 400,000 members and sends over 50 million emails a year. Yet they still operate by three rules: “no staff, no fundraising, and no strings attached.” Through ServiceSpace, Nipun has created a platform for people to increase their giver quotients, divided into three categories: gift economy projects, inspirational content, and volunteer and nonprofit support. One of the gift economy projects is Karma Kitchen, where the menu has no prices. When the bill arrives, it reads $0.00 and contains just two sentences: “Your meal was a gift from someone who came before you. To keep the chain of gifts alive, we invite you to pay it forward for those who dine after you.”

8. Launch a Personal Generosity Experiment. If you’d rather give on your own, try the GOOD 30-day challenge. Each day for a month, GOOD suggests a different way to give. For more examples of random acts of kindness, check out Sasha Dichter’s 30-day generosity experiment and Ryan Garcia’s year of daily random acts of kindness. Dichter, the chief innovation officer at the Acumen Fund, embarked on a monthlong generosity experiment in which he said yes to every request for help that he received. Garcia, a sales executive at ZocDoc, is performing one random act of kindness every day for an entire year and keeping a blog about his experience, from stepping up as a mentor to thanking a customer service representative. As research shows, this generosity experiment is likely to be most psychologically rewarding if you spend somewhere between two and 11 hours a week on it, and if you distribute it into larger chunks—multiple acts once a week, instead of one act every day.

9. Help Fund a Project. Many people are seeking financial support for their projects. On Kickstarter, known as the world’s largest funding platform for creative projects, you can find people looking for help in designing and launching movies, books, video games, music, plays, paintings, and other products and services. On Kiva, you can identify opportunities to make microloans of $25 or more to entrepreneurs in the developing world. Both sites give you the chance to see and follow the progress of the people you help.

10. Seek Help More Often. If you want other people to be givers, one of the easiest steps is to ask. When you ask for help, you’re not always imposing a burden. Some people are givers, and by asking for help, you’re creating an opportunity for them to express their values and feel valued. By asking for a five-minute favor, you impose a relatively small burden—and if you ask a matcher, you can count on having an opportunity to reciprocate. Wayne and Cheryl Baker note that people can “start the spark of reciprocity by making requests as well as helping others. Help generously and without thought of return; but also ask often for what you need.”