In 2016, more than 16 million adults in the United States suffered from at least one major depressive episode—an alarming statistic, to say the least. Depression is also costly to society, affecting our health care system, workplace productivity, and individual and family welfare.

While depression is often treated at an individual level, less is known about wider initiatives that might impact whole communities. But a new study has now uncovered at least one initiative that holds promise: “greening” neighborhood lots. 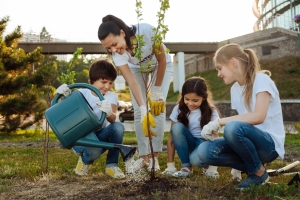 In this study, published in the Journal of the American Medical Association, a citywide experiment was conducted in Philadelphia, Pennsylvania. Over 540 blighted vacant lots were randomly assigned to receive one of three treatments: “greening” that involved removing trash, planting new grass and some trees, installing a low wooden fence, and monthly maintenance; “trash cleanup” that involved removing trash, limited grass mowing, and monthly maintenance, but no plantings or fence; or no treatment.

Before and after the two-month experiment, random residents living in clusters around the lots reported how often during the last month they’d felt nervous, hopeless, restless, depressed, worthless, or that everything was an effort for them.

By analyzing changes in the different groups, the researchers found that people living near the greened spaces experienced significant reductions in their feelings of depression and worthlessness compared to those living near untouched lots.

Those in the trash cleanup group did not experience comparable gains, which means that simply receiving some benefit to the community wasn’t enough. “There’s something about the green space that’s important for health,” says lead researcher Eugenia South.

In addition, neighborhoods with more poverty saw slightly stronger results. Greening their lots had a greater impact on their well-being—perhaps because they started out with more blight to begin with, says South.

While prior studies had found that people who live near greener spaces are happier and healthier, it was hard to say which came first—better mental health or more green space. This may be the first study that really supports the idea that green space causes these changes.

Why would greening a vacant lot improve people’s well-being? South speculates that it could have something to do with stress reduction, as prior research has suggested that green spaces provide relief for people who feel bombarded by overstimulating environments, which can affect their ability to pay attention. Additionally, it’s possible that green space increases social connection, because it attracts people to spend time outdoors, where they might interact more with their neighbors and develop closer relationships. And since people who experience less loneliness and less stress—particularly less chronic stress—are less depressed, this could be the mechanism through which green space works its magic.

South’s results add to a growing body of research that suggests greening our environment is good for our well-being at a community level, where it can also lead to less violent crime.

South is particularly enthusiastic about the low cost of these kind of initiatives. Her team spent an average of $1,600 to green each lot, with about $180 per year in maintenance fees—something she hopes will inspire budget-conscious city planners. Additionally, since the neighborhoods studied tended to be poorer—with a higher risk of depression and less access to larger public parks in other parts of the city—she sees greening small, local lots as a simple, practical way to help.

“I’m mostly interested in people who generally don’t have much access to green space, who have a lot of life stressors, and who have the potential to gain a lot from more green space exposure,” she says.

She hopes this research also reaches doctors who work with patients from low-income areas. Too often, she says, doctors forget to ask about the environment in which people live and miss important information about how living in a blighted community impacts their patients’ health. Already some doctors are starting to prescribe more time in green space for their patients—something she finds encouraging.

Mostly, though, she wants city planners to take note.

“I hope this will have a practical impact in informing the ways that cities, community groups, and nonprofits think about green space, particularly in low-resourced communities,” she says. “Cities should take a close look at this.”