Have you ever been so absorbed in a novel that you just can’t put it down or watched a movie where you forgot you were in a theatre? Stories have the power to transport us to another world, often bringing up powerful emotions. Many of us spend a great deal of time engaged with stories. But, if you’re like me, you’ve probably never really stopped to wonder why.

Fortunately, we now have Jonathan Gottschall’s The Storytelling Animal: How Stories Make Us Human. Gottschall, a literary scholar who teaches at Washington and Jefferson College in Pennsylvania, shows how stories not only have the power to absorb our attention, they can make us more empathic, help us navigate our complex social world, and may even draw us together as a community—in other words, they may have an evolutionary purpose. 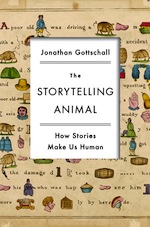 According to Gottschall, we spend an enormous amount of time engrossed in stories—whether we’re reading books, newspapers, or religious texts, watching movies or TV shows, or conversing with friends. And when we aren’t taking in others’ stories, we’re often spinning our own, spending about half of our waking hours engaged in daydreaming about the past or future. And, of course, we all dream at night, our brains continuing to fabricate stories while we’re asleep.

Even children as young as three years old will engage in make believe story play, creating characters and acting out plots that often involve overcoming difficult obstacles—proof that storytelling is deeply ingrained in our species.

Some evolutionists, according to Gottschall, think storytelling began as a kind of foreplay, because storytellers who displayed skill, intelligence, and creativity were desirable in a mate. Alternatively, storytelling may have started as a form of mental exercise, strengthening our cognitive capacities, which would be useful for our survival.

Other scientists believe that storytelling serves as a form of communication that provides a way to pass on complex information to others and make it memorable. It may also serve as a kind of social glue, providing origin myths and other identifying stories to help society members bond with and care for one another.

Whatever the evolutionary origins, our brains are geared to react to storytelling. Mirror neurons—those brain cells that allow us to experience the emotions of another person, like feeling sad when we see a sad person—also fire when we’re at the movies or reading books or whenever we witness a story character emoting. In fact, Keith Oatley and other researchers who study the effects of storytelling on the brain have found that people who read a lot of fiction tend to have higher levels of empathy and better social skills than those who don’t, probably because of the strengthening of the mirror neuron response.

Gottschall argues that stories are perhaps “the main cohering force” in human life, helping us learn right from wrong and encouraging us to act ethically. “They teach us about the world while infecting us with emotions. This combination has been shown to change attitudes and is often more effective than nonfiction at changing beliefs,” he writes.

But, therein lies the problem with storytelling: Sometimes our emotional resonance with characters can lead us astray, such as when we allow a good storyteller to convince us to believe in a conspiracy theory. We need to remember that when we are emotionally engaged in stories, we are easy to mold and manipulate, something that people in power have long used to their advantage.

For a lot of human history, storytelling was a communal affair, where people gathered together to listen to stories. When the printing press came along, it was a revolution—people could read stories on their own rather than rely on storytellers. Now, some worry that the novel itself may become obsolete; but Gottschall doesn’t see this happening anytime soon—our attraction to fiction is too great, he writes.

However, he does contemplate possible future directions for storytelling—virtual stories. He points to the enormous popularity of online games like “World of Warcraft,” in which players become characters in a complex, interactive story involving thousands, if not millions, of other players. Often, participants in these games experience feelings of community and competence. It’s easy to see how alluring this alternative reality could be, especially if your everyday world is rather mundane or lonely.

Our greed for stories may have a down side—they may become addictive. But, for the most part, Gottschall sees stories as a necessary, fundamental part of who we are. He suggests we embrace our love of story by reading fiction often and allowing ourselves to daydream, while being skeptical of conspiracy theories, and avoiding a tendency to look down on national or religious origin myths—the stories created to hold cultures together.

After all, story is universal. We just can’t help ourselves.

Jill, great review.  I recently went to Hawaii and
was impressed with how the natives imbued the
landscape, flora and fauna with stories that tie into
the Hawaiian’s origins and well-being.  These living
stories tie the Hawaiians closely to the well being
of the land and animals as well.

It’s too bad that we’ve lost those stories here in the
SF Bay Area, given the destruction of the
indigenous storytelling culture of the Ohlones.  I
guess we’ll have to start telling our own stories and
histories.  Have you read Richard Schwartz’
Eccentrics, Heroes, and Cutthroats of Old Berkeley.
His books are pretty popular!

Tom, Thanks for your comments. I appreciate the
point you make that storytelling is a way to foster
reverence for the land and its wildlife. Unfortunately,
I haven’t read Schwartz’ book, but I appreciate the
recommendation!