For my three-year-old son, his playmates are an endless source of entertainment: They meet up at the park to go down the slide, ride tricycles, and conspire in plenty of shenanigans. As he gets older, I hope he will also experience the unparalleled gift of great friendship, with all the delight, reassurance, interconnection, and opportunities for growth that it brings. 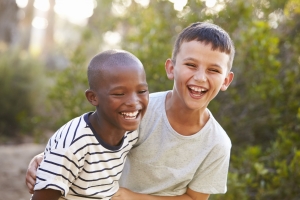 My hopes are echoed in a new study published in Psychological Science, which found that boys’ friendships are not just fun and rewarding—they could also lead to better health.

Jenny Cundiff and Karen Matthews explored whether boyhood friendships were related to physical health in adulthood. The study enrolled over 250 six-year-old boys attending public schools in an urban city in the United States in the late 1980s. The boys were primarily black (56 percent) and white (41 percent), and mostly came from families receiving public financial assistance (61 percent).

The researchers followed up with the boys twice a year for the first four years and then annually for nine years. Each year, parents answered the following question about their children: “Over the past year, how much time has your son spent with his friends during an average week?” The researchers recontacted the men when they were in their early 30s and assessed their physical health, by measuring their blood pressure and body mass index.

The researchers found that men who had spent more time with their friends as children tended to have lower blood pressure and body mass index 20 years later. What’s more, this link was not explained by the men’s level of social interaction as adults or their childhood health problems, body mass index, socioeconomic status, hostility, or extraversion.

Why does childhood friendship coincide with better adult health? It didn’t seem to be due to something else in the boys’ lives that made them both connected and healthy, like participating more in sports or having more involved parents. But a few other studies provide some promising, direct explanations.

For example, a research review by Megan Gunnar and Camelia Hostinar argues that social support could play an important role in kids’ stress physiology. Having friends who can support you in times of adversity and help you find ways to cope could buffer against the harmful effects of stress in the body.

In particular, it’s possible that friends protect against bullying. Although parents have a primary role in helping young kids cope with stress, friends begin to take on this important role in later childhood, particularly during early experiences with bullying. Another study by Kristin Kendrick and colleagues found that kids who have at least one good friend, whom they count on to be a source of emotional and practical support, are less likely to be involved in bullying—either as a perpetrator or victim—one year later.

How to help boys maintain friendships

We may have a tendency to downplay the role of friendships in boys’ lives compared to girls’, but that would be a mistake. In a recent research review, Amanda Rose and Steven Asher address the “damaging stereotypes that males are inept at relationships.” Indeed, a 2010 research review by Francois Poulin and Alessandra Chan explains that boys’ friendships are at least as stable or more compared to girls’ friendships. Here are three tips parents can use to help their kids with friendships.

1. Reassure kids that even good friends sometimes make mistakes. Rose and Asher highlight that children who are successful at making and keeping friends are good at coping with a friend who has fallen short of expectations—for example, a buddy who took a joke too far and didn’t realize that he hurt them.

Encouraging your child to stick with a friend who has disappointed them can be tricky. Friendships are voluntary, and it’s easy to walk away from a relationship if you feel wronged. If your child is inclined to shut down, leave the situation fuming, and discard the friendship forever, then practice active listening as he or she shares the experience with you.

Did active listening reveal any positive, redemptive qualities of the friend that you could revisit with your child? If yes, then together explore ways that your child can communicate assertively about the lapse in kindness and give the friend a chance to respond and make amends.

Of course, discussing the severity and frequency of friendship transgressions will also help kids set expectations and limits for their peers so that they have healthy relationships.

2. Encourage kids to be OK with a friend having other friends, too. According to Rose and Asher, children who are successful at navigating friendships may be more likely to appreciate that it is possible to have many friends; they embrace their friends’ independent choices without being possessive or expecting exclusivity.

In a recent study, Hwaheun Kim and colleagues write, “Jealousy over friends is common at the start of early adolescence but begins declining very quickly for some children as adolescence progresses and they better recognize that the outside interests of their friends do not necessarily imply negative things about their own relationship.”

The ability to deal with strong emotions seems to play a role in this kind of jealousy. In their study of 10- to 15-year-old, mostly white adolescents in the southern United States, the researchers found that adolescents with lower self-esteem also tended to be more jealous, but only if they had a difficult time coping with strong emotions.

So how can we help adolescents process difficult emotions? In their 2010 study, Kristin Neff and Pittman McGehee suggest that teaching adolescents self-compassion may promote their resilience and support them in intense emotional experiences. During a self-compassion break, adolescents can acknowledge the challenge they are contending with, recognize that everyone struggles sometimes, and offer self-kindness.

3. Take the temperature of your own adult friendships. Children’s friendships may take after their parents’ friendships, according to a 2013 study of over 170 fifth-, eighth-, and eleventh-graders living in the Midwest. Gary Glick and colleagues found that kids with greater friendship issues such as antagonism, disagreements, and quarrels were more likely to have moms with higher-conflict adult friendships.

Although the study could not confirm that one caused the other, Glick and colleagues suggest that moms who have a lot of conflict with their friends may signal to their kids that this is normal when it comes to friendships.

Modeling how to handle disagreements in adult relationships may be a way to help kids problem-solve with their friends. Parents could set an example by trying to step back and take a broader perspective on an argument rather than refusing to see the other person’s point of view. Friends could also try walking together, a conflict resolution tactic that helps two people get on the same page through parallel movement and attention. Finally, acts of self-affirmation such as reflecting on your personal values and identity have been shown to lessen defensiveness during conflict and foster trust, compromise, and closeness.

Apart from my son having fun pals on the playground, my wish is for him to have the depth of friendship highlighted by E.B. White in Charlotte’s Web: “You have been my friend. That in itself is a tremendous thing.” Friendship will strengthen his heart in more ways than one, it seems.