In recent years, the idea of contagion has spread far beyond medicine, all the way to the social sciences. Researchers have demonstrated how a variety of problematic behaviors, including smoking and overeating, tend to spread among friends, not unlike an infectious disease. 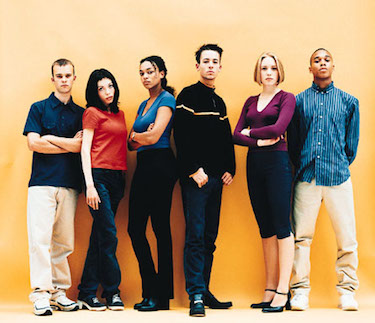 Well, a new study reports this dynamic can also function in a positive way. Specifically, it finds that, among American adolescents, a healthy mood spreads through social contact. Depression, on the other hand, does not.

“Our results suggest that promotion of friendship between adolescents can reduce both incidence and prevalence of depression,” a research team from the University of Warwick writes in the Proceedings of the Royal Society B.

Researchers Edward Hill, Frances Griffiths, and Thomas House used data from the National Longitudinal Study of Adolescent to Adult Health, a nationally representative sample of young Americans who were in grades seven through 12 during the 1994-95 school year.

Their information was gathered from in-home interviews conducted six to 12 months apart, in which the students filled out a standard questionnaire indicating their depressive symptoms (or lack thereof), and listed up to five male and five female friends.

After modeling the results, the researchers concluded that “adolescents with five or more healthy (that is, non-depressed) friends have half the probability of becoming depressed over a six-to-12-month period compared to adolescents with no healthy friends.”

On the other hand, they found no similar spreading of depressive symptoms. “Depression has been associated with social withdrawal,” they note, “and so depressed individuals would be expected to exert less social influence than adolescents with healthy moods.”

“Each individual may need sufficient exposure to others with a healthy mood in order to stay well, or become well if depressed,” the researchers add. “People who are, or have a tendency to be, depressed are less able to maintain a positive outlook from moment to moment—a deficit potentially compensated by interaction with healthy friends.”

Given the prevalence of depression, and how disabling it can be, these findings have real public policy implications. They suggest cultivating a strong network of emotionally healthy friends—perhaps through clubs or other organizations based on shared interests—can be a powerful and positive counterweight to the dark impulses most of us feel at some point during our adolescent years.

It turns out contentedness is contagious.