Clinical psychologist Kate Russo saw her first total solar eclipse in 1999 on the coast of France—fulfilling one of the bucket-list items she dreamt up as a teenager. Little did she know that the experience would change her life and determine the course of her career.

“After it happened, I was so, so gobsmacked and so surprised. I thought I knew what was going to happen, but I didn’t,” she recalls. “I just knew that I had to see another one.” 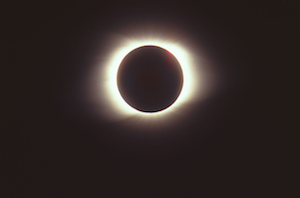 “Eclipse-chasers” aim to put themselves in what’s called the path of totality, the thin region where the sun is completely blocked out. Next Monday, a solar eclipse will occur where the path of totality arcs across the entire United States, offering Americans a unique opportunity to witness this astronomical phenomenon.

While partial eclipses are interesting—many people who recall seeing an eclipse probably saw a partial one—total eclipses are breathtaking. Full darkness descends as the moon blocks the sun and its shadow covers the Earth. Viewers can remove protective glasses and stare at the black circle and the “corona” of the sun—the wispy plasma that surrounds all stars—with their naked eyes.

Since 1999, Russo has traveled around the globe, from Mongolia to Madagascar, to witness 10 total solar eclipses. (They occur somewhere about once every 18 months, although any given city will only see a total solar eclipse every 375 years.) She has also embarked on a research program to document and analyze the experiences of eclipse-chasers, publishing her findings in the books Total Addiction and Being in the Shadow.

We checked in with Russo, who plans to view next Monday’s eclipse from Wyoming, to learn why eclipses are such powerful experiences—and what that says about humanity.

Kira M. Newman: Based on your research and interviews, what are the common elements of the experience of viewing a total eclipse? 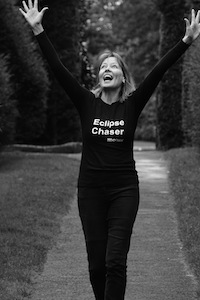 Dr. Kate Russo: My survey data was interesting because it showed me that, again and again, the eclipse-chasers were saying the same things. It was so amazing. For the first time, I was like, Oh my god, I’m not the only crazy one here! There is something about this experience that is so profound and really life-changing. I basically teased out the common elements of it, and it creates an acronym called SPACED.

What happens is that you’re standing there waiting for it to happen, and there’s this “sense of wrongness”—that’s the S. You’re picking up that there’s something in the environment that really is not right. This is the element that’s very hard to describe to people who haven’t seen it, because they just imagine that it goes from day to night, and we all experience that every day. But there’s something otherworldly that happens; you just cannot communicate to other people how weird the environment gets. We pick up on a very primitive level that this is not right, that this is wrong; it’s like the rules of nature are turned on their head and it’s just too eerie.

And then that leads to a primal fear. The hair on the back of our neck stands up, we get goosebumps, and this is the moment where the shadow comes towards us. You’re looking at the sky and there’s this creeping darkness; it’s so ominous and really wrong and we just think, What is going on? So, that’s the P, the “primal fear.”

And then as totality comes above you and the darkness descends, and you’re standing there in the shadow of the moon and you’re looking up and you’re seeing the eclipsed sun, it’s just the most spectacular thing you’ve seen. I know you’ve seen photos of it, but to actually see it with your naked eye is just mind-blowing; it’s incredible. That’s when we get that sense of complete “awe”—that’s the A.

We know the emotion of awe involves vastness: We get a sense of the significance of something and how powerful it is in relation to us, and so we feel insignificant ourselves. We have to actually change our mental structures to help us understand what we’re seeing because it’s just so vast, so huge.

I think the awe we experience during a total solar eclipse is very unique because it is the universe that we are experiencing. When you think about it, you are actually standing in the shadow of the moon, which is a solar object out there, and it’s the shadow that’s passing over us—that’s what the darkness is. Therefore, the moon is a three-dimensional object—and if that’s how vast it is, how much further does the universe extend? I believe it’s probably the strongest awe we can feel, apart from going into space and seeing our little planet from above.

So, we feel insignificant, but we also then feel “connected” to something greater—and that’s the C in SPACED. I myself feel connected to humanity and nature, so I just have this sense of how we are all one. It doesn’t matter what color, religion, background, culture you come from, regardless of how you make sense of it, we all experience this. We are human beings standing there at that moment at that point in time, all connected with our experience.

We feel connected to our primitive ancestors, as well. I almost feel like time doesn’t matter anymore and I go back in time and I imagine: What if I’m a primitive ancestor and I have no idea this is happening and then suddenly everything you know about the world just disappears and it goes dark? And you absolutely would imagine it was the end of the world. And so you know how those people would have felt because you’re feeling elements of that yourself.

And then afterwards is the “euphoria”—that’s the E. There’s such a range of intense emotion over a very, very short period of time, like a rollercoaster that happens within minutes. You have the most intense highs and it’s just incredible.

And then the total eclipse is over and then we are just left with this “desire to repeat,” and that’s the D. It’s so strong. If you’re in a group of people who have seen their first total eclipse, the next question is When’s the next one? People just can’t fathom the idea that that’s all it is; they have to see it again.

“I think the awe we experience during a total solar eclipse is probably the strongest awe we can feel, apart from going into space”

KMN: How does seeing a total solar eclipse in a group affect the experience?

KR: I’ve seen totality in a group, I’ve seen it by myself, with my partner, I’ve seen it up in mountains and in the ocean. Every time is different and unique and beautiful.

I think the group experience adds an element to it that is pretty hard to beat. Whenever you’re plunged into darkness and that ominous feeling, you can feel the group feeling that; it’s electric. And then as the shadow passes over you, when everyone feels that euphoria, people scream out, people cry. The noises of the crowds just lift up and the sound really permeates within you. It is chilling, and that’s the moment that I get goosebumps. Even now, if I sit here and watch a video clip of totality happening above a crowd, I get goosebumps watching it—and it’s the sound of the crowd that does it for me.

But also when you’re experiencing totality itself, when you’re experiencing the awe, you turn inward then. It’s like you’re in a private moment with the universe, and it’s so, so powerful—it’s kind of like you’re in your own little world, you’re connected, the universe is speaking to you. And then at the end it goes away and you’re sharing the crowd’s experience again. Everyone just comes together, there’s such a festive feeling, there’s a feeling of excitement and connection; you’re hugging people you’ve never seen before, there are tears, you’re sharing emotional stories.

KMN: I’ve very goosebump-prone, so I’m getting goosebumps just hearing you talk about it.

KR: I think that there are some people that are primed to be eclipse-chasers. There are some people who are more sensate than others. If you’re someone who can have a very deep emotional reaction to a piece of music, for example, or hear someone talking about something with passion and have it really resonate within you, I think these are the types of people who become eclipse-chasers when they see a total solar eclipse because the experience is so profound.

It usually is one of the most profound experiences of people’s lives. I’ve heard grown men say that it was more important than the birth of their child. It’s very, very powerful. If you love to travel and you’re one of these people who experience things like that, and you’ve got little passions and hobbies in your life already, then you’re probably primed when you see the first total solar eclipse. It might change your life, too.

But you have to see the total eclipse. None of this happens during a partial eclipse.

KMN: You mention that seeing a total solar eclipse can create motivation and meaning in life for certain people, beyond just the desire to chase eclipses. Can you talk more about that?

KR: For me, it has given me so much passion and drive to experience life to the full. Every time I see a total solar eclipse, it just confirms that I’m doing the exact thing I should be doing, and I just feel so much energy. I feel so humbled that I’ve had this insight into life, that [otherwise] I may only have gotten through experiencing loss.

You learn life insights when you’re about to lose someone or when you have lost someone. You understand that it’s so important to live in the moment, to take things day by day; you understand that it’s the experiences you have and the people you share them with—that’s what life is all about. And we tend to only really fully appreciate that when we’ve lost someone, and then some people go on to say, Okay, I know how fragile life is, I’m therefore going to make some big changes. The same thing happens during a total solar eclipse, except there’s no loss. When you ask how has it enriched my life, it just makes me feel so passionate, so humble; I want to do things for others.

I always say that if everybody sees a total solar eclipse, the world would be a better place.