Are you procrastinating? I am. I have been delaying writing this article for the last few days even though I knew I had a deadline. I have scrolled through social media, and I have gone down a rabbit hole looking up houses on Rightmove—even though I do not need a new house. 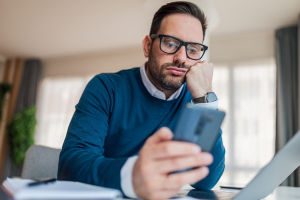 I have also re-watched the video “Inside the Mind of a Master Procrastinator” by Tim Urban, one of the best TED Talks I have seen. I found it especially comforting to learn that even pigeons procrastinate.

Procrastination is an interesting form of delay, which is irrational in the sense that we do it despite knowing it can have negative consequences. These can range from penalties or fines for a late bill to a lower grade and even a dropout in the academic context. I know on some subconscious level that if I delay finishing the draft of my book, it will cause me stress when I have to complete it in a much shorter amount of time instead.

Given that procrastination causes stress and anxiety, why are most of us still prone to it? As research shows, it is related to a number of cognitive biases.

Researchers have defined procrastination as the “present bias in preferences, on account of which agents delay doing unpleasant tasks that they themselves wish they would do sooner.” Present bias (or “hyperbolic discounting”) is the tendency, when considering a tradeoff between two future moments, to give more importance to the one that happens sooner.

For example, we may disregard the future consequences of an action. This comes into play when I give in to temptation and eat yet another chocolate biscuit even though I know I need to cut down on sugar. My willpower does not hold up to this inherent bias where I focus on instant pleasure.

Psychologically, we perceive the impact of an event—or the value of a reward—as dampened if it is further away in the future. This means we perceive a desired result in the future as less valuable than one in the present. This can also cause a disconnect from our future selves, where we may perceive the positive consequences of completing a task successfully as happening to someone else, rather than a future version of ourselves.

When we’re procrastinating, we are choosing a positive activity in the present (such as watching cat videos or socializing) over a positive consequence later on—such as the satisfaction of completing a task or getting a good grade on an assignment. This normally also involves thinking about the negative consequence of procrastinating at the same time. This is also the reason why people might delay saving for retirement.

In one study, when a group of students were offered two choices—$150 now or $200 in six months—a significant majority chose the $150 being offered to them in the present. And when offered the choice between $50 now and $100 a year from now, many chose the immediate $50. Our preference for things and our choices can be distorted by our relative temporal distance to these options.

We are hardwired to choose a smaller gain today than a larger gain tomorrow. That said, we all differ in our ability to fight this urge—some people are more biased toward the future or the past.

As I have shown in my book Sway, another cognitive bias that is likely to come into play is status quo bias. Our brains are lazy and we want to avoid cognitive load as much as possible. So we are hardwired to avoid tasks that cause us to change our mindset or that lead to cognitive burden—we’d rather just stick with the relaxed mind state we have at the minute than engage in something new and exhausting.

It essentially makes us resistant to change, as we fear we’ll regret actively making choices (when doing nothing is also a “choice”). The status quo bias can, for example, lead to “loss aversion bias”—compelling us to focus on not losing. When in doubt, we essentially tell ourselves to do nothing.

Losses are almost twice as psychologically harmful as gains are beneficial. In other words, most people feel twice as much psychological pain from losing $100 as pleasure from gaining $100. This bias means that people are reluctant to take risks by giving away what they possess in favor of something that “might” be more profitable to them in the future.

Some personality traits could influence your propensity to stick with the status quo. If you are open and curious about new things, less averse to taking risks, and have a strong sense of duty (conscientiousness), you may be slightly less affected by this bias.

Procrastination is a universal experience, irrespective of cultural differences. In my view, it is not a sign of laziness as it is often labeled to be. It is not always bad to delay tasks. I believe sometimes it gives us an opportunity to mull over uncertainties. And research shows it can help us navigate difficult emotions—potentially leading to better work in the end.

Saying this, sometimes procrastination can be a real barrier. This may be due to an underlying mental health problem that needs support and treatment. If procrastination is seriously interfering with your life, you may want to start chopping tasks into smaller pieces and set rewards after each step.

Ultimately, we all have different perceptions of time. Understanding individual differences may also help us better understand neurodiverse people. For example, some people have been found to parcel time differently, and more inconsistently—time might not work linearly for them but rather in a cyclical manner, which I can relate to.

That reminds me I should really do my tax returns now. No time like now. Or maybe after I’ve had another cup of coffee.