When the shelter-in-place orders came down in California, the first thing I thought of was my cousin’s wedding—the one I was supposed to officiate. I’d been working on creating a special ceremony since the fall. But once the pandemic kicked in, everything was cancelled. 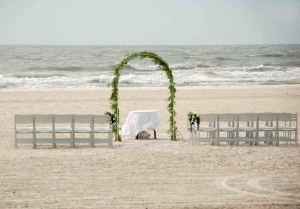 Perhaps my cousin is luckier than some—after all, a wedding can be rescheduled. Even so, he had to let go of a cherished dream of when and how his wedding would take place.

He’s certainly not alone. Many people have had to give up important shared rituals—graduation ceremonies, prom nights, long-awaited concerts, religious services, opening day baseball, and even funerals. The loss, while necessary, is profound.

What can we do to cope? Is there something we can learn from this experience that will help us carry on? What will it mean for the future of our social fabric?

No one knows exactly how forgoing shared rituals will affect us individually or as a society. However, science does give us some clues. By understanding the purpose of shared rituals, we can try to preserve their intent and create a sense of shared emotion, connection, and transcendence.

Why we have shared rituals

Shared rituals play an important role in our psyches, according to social psychologist Shira Gabriel. Her research suggests that rituals—choreographed events that produce an emotionally laden experience—create a feeling of unity and sacredness that bonds us together with others.

“Rituals give us a feeling of going beyond the ordinary—of having a moment that transcends that, turning events into something special and meaningful,” says Gabriel.

Why transcendent? Because when we participate in ritual, we experience a sort of emotion contagion that sociologist Émile Durkheim called “collective effervescence.” That uplift and energy increase our sense of commonality (even with strangers) and make us feel we are part of a larger community. It’s why we can feel so bonded to fellow Golden State Warriors fans at a game or so unified during a protest march.

Gabriel says that we often create shared rituals when we go through important life transitions, too, because they mark the passage of time as sacred. Weddings, funerals, and graduations, for example, all give us a sense of meaning, which makes forgoing them so hard.

“There’s no doubt that people are going to grieve and are going to feel sad about the loss of what they had planned,” she says.

Losing out on shared rituals may also be difficult for society at large, argues sociologist Randall Collins. His research has suggested that when people stop gathering together to share emotional experiences, their sense of oneness tends to dissipate, even after experiencing a community tragedy as unifying as 9/11.

He wonders if the same might happen with the coronavirus outbreak, especially given the need for “social distancing.” A big event involving the whole country—and, in fact, the whole world—will make “everybody focus on the same thing and feel the same emotions,” which creates a sense of solidarity. At the same time, however, we lose face-to-face interaction with other people. Can email, phone conversations, and Zoom meetings make up for that loss? “I would say the evidence is sort of a yes, but to a weaker degree,” says Collins.

Gabriel agrees that there is something special about in-person rituals. But her research findings suggest that collective effervescence and social solidarity don’t happen only during bigger public events; they can occur even in everyday interactions, too, like watching TV together or attending an interesting lecture. This means we can create that uplift more easily than we might think.

“Everyday moments of collective effervescence can make us feel more connected to others, and make us feel as if our life has meaning,” says Gabriel. “Our research suggests that people who experience these things a lot are likely to be happier and feel less anxious and depressed.”

It’s good to know that losing shared rituals isn’t dire. That doesn’t mean giving them up is easy.

Therapist Lori Gottlieb, author of Maybe You Should Talk to Someone, worries that people might discount their losses as trivial by comparing themselves to others who may be suffering more serious losses, such as losing a job or loved one. But, she adds, not being able to fulfill life dreams or expectations can be painful, too, and may require grieving.

“People need to be able to talk about what they’re experiencing, because these are real losses,” she says. “We’re not here to rank each other’s losses in terms of which one is more valid or which one is more significant.”

She points to her own losses from the coronavirus outbreak—her teen son will miss his last semester of eighth grade, and she can’t hold a funeral after her father’s death or sit shiva for him (a Jewish tradition that helps the bereaved honor the passing of their loved ones). Dismissing those losses or not accepting our feelings of loss is not the answer.

“As parents, partners, family members, and friends, we need to allow people to talk about the things that they’re missing,” she says.

That doesn’t preclude reframing a loss in more positive terms or looking for potential silver linings in our current experience, she adds. Being at home with less to do and more free time may give people new opportunities for intimacy, like calling up old friends or spending time with children who are usually away at school.

“Instead of focusing on the things that you don’t have, you can look at all of the new things that you do have right now,” she says. “There’s a lot to be gained in the midst of loss, in the form of community and connection.”

How to make new rituals

Sheltering in place could also inspire people to create alternative events to mark special occasions, she says, such as a Zoom dance party to celebrate a graduation, which may even end up being more memorable than what was originally planned.

Jan Stanley, who works as a celebrant—someone who designs rituals for weddings and funerals—says that it’s not too hard to create rituals online, if you keep certain things in mind. She suggests that you:

Though an online ritual may lack some of the power of an in-person ritual, says Stanley, it still has value. Even doing rituals alone can be useful, she adds, if it’s meaningful. Research suggests that creating rituals just for ourselves can help alleviate grief after loss and make us feel less out of control, which could help now, when the world seems so uncertain.

“If you can design a ritual to be meaningful—so that it actually touches your heart or brings someone to mind or gives you a sense of your own purpose—all the better,” she says.

Gabriel encourages people to also look beyond formalized rituals to everyday opportunities to share positive emotion and a sense of solidarity from a distance.

She points to examples from her own neighborhood, where people are putting up rainbows in their windows, drawing pictures on the sidewalk for others to see when they walk by, or leaving notes for one another on the ends of driveways. She mentions widely shared online videos showing people singing from their balconies, cheering in appreciation of health care workers, or creating drive-by birthday parades.

“People are drawn to collective rituals like these for a reason—we want to feel connected to other people and to feel a sensation of sacredness,” she says. “These kinds of events should bring on those same sorts of feelings.”

Once the shelter-in-place orders have been lifted, though, Gabriel hopes we’ll gain a renewed appreciation for shared rituals.

“Hopefully, we’ll go back to them and we’ll value them even more than we do now,” she says. “And, maybe we’ll have learned some new tricks along the way, some new ways to connect to other people that we didn’t have before.”