I was churning through social media feeds one morning when the phrase tough compassion made me pause mid-scroll. 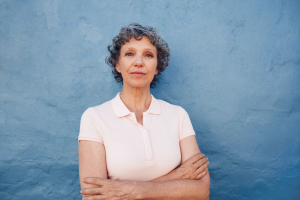 On a podcast episode, psychologist and GGSC founding director Dacher Keltner described the idea, explaining how some contemplatives practice a form of kindness with a decided edge.

“In the deeper traditions of compassion, like a lot of the Buddhist traditions, they have an idea of tough compassion—to step in and, in a good way, guide the person to a different form of behavior or out,” said Keltner.

The concept stuck with me because it seemed so at odds with the way most Americans, especially women, are socialized to think about compassion. The compassion-centered lifestyle sketched in breezy Insta posts involves attending idyllic retreats and practicing meditation. If compassion were a Pantone Color of the Year, it would be whispery rose quartz.

In short, our culture presents a clear picture of what compassion is supposed to look like. And giving someone else an honest piece of our minds isn’t it.

It might be time to paint a new picture of compassion. When it comes to reducing suffering in the world, an uncompromising approach to compassion often trumps a pastel-hued one—and it’s an approach you can try when other attempts to engage with difficult people fail.

“The Dalai Lama always had this greater good analysis,” Keltner later told me. “Like, ‘What does it bring about? Is being hard in the moment going to bring about greater well-being or kindness for a lot of people?’”

The case for tough compassion

Tough compassion is gaining traction because the rose-quartz version is proving so unequal to the present moment, which has been defined by human failures to meet challenges posed by the pandemic, widespread inequality, and climate change.

Of course, there will always be a “soft” side to compassion. It’s always crucial to learn how to be a calm sounding board or comfort grieving loved ones. But warm and fuzzy compassion has little power to sway relatives who spout conspiracies, stop close friends from radicalizing online, or embarrass leaders who tout equality while harvesting the fruits of privilege.

In the Buddhist contemplative tradition, the goal of true compassion is to find ways to promote the least suffering for everyone. In this broader framing, nodding along with someone’s bigotry, bullying, or falsehoods for the sake of preserving that relationship is the opposite of compassion. It interferes with peace-building on a societal level, even though it might seem on the surface like a nonviolent act.

If you’re a parent, you probably practice small-scale tough compassion on a daily basis, vetoing pre-dinner snacks or enforcing homework time before kids go out. Larger-scale tough compassion flows from a similar source: the willingness to bear—and even inflict—some discomfort in the moment to promote longer-term well-being.

“You have this sense, and you’re in the position to assume, that this is a struggle they have to face,” Keltner says. “It’s good for them.”

The Dalai Lama has spoken of the importance of this kind of tough love. It means that if your aunt makes an offhand racist remark, or your work buddy insults a colleague, tough compassion involves speaking up—without rancor, but with conviction—if your goal is to promote less suffering for all.

“By withdrawing from the conversation, you don’t force the other person to really have to encounter a different set of values,” says Medical College of Wisconsin psychologist Zeno Franco, whose research focuses on community engagement.

In committing to tough compassion, you buy into a certain kind of risk-benefit calculus. You accept the discomfort involved in hopes that the other person will consider a different way of engaging, one that will carry over into her interactions with others, and perhaps even their interactions with those close to them.

“Our actions implicate a lot of people,” Keltner says. “You’ve got to step back and think about all the utilities and consequences downstream.”

It’s one thing to endorse the tough-compassion approach and quite another to try to make it work. What does it actually look like to show uncompromising compassion in the moment? And when someone in your life does something that’s actively harmful, what’s the best way to guide them without outright coercing or controlling?

In Franco’s view, tough compassion involves conveying that you value someone as a person while disagreeing openly with what they are doing.

When he calls loved ones out for hateful or harmful behavior, he’s not shy about saying what he thinks. But at the same time, “I try to remain accessible as a human being who can be vulnerable, who can be hurt, and who can appreciate the person,” he says. “Part of that is thinking about how to respond in a way that is not designed to escalate, but almost to reach past the ‘facts’ or points that they are making to where what they are saying impacts me at an emotional level.”

A powerful way to convey this emotional impact is through storytelling, says Juliana Tafur, a filmmaker and founder of the Listen Courageously project. If you want to hold a relative accountable for homophobic remarks, for instance, you can describe the effects of that kind of behavior on people close to you: “My good friend is gay, and she hears insults like that all the time. She’s also been attacked in public. Because of that, it’s hard for her to trust that people are going to respect her as a human being.”

With storytelling, you can take a tough stance and show the other person the results of their actions without launching a direct attack. When you do this, “you’re really communicating—in a way that is enveloped in compassion—your fundamental boundaries, what you can and cannot accept, and inviting the other person into that conversation,” says Tania Diaz, a psychologist at Albizu University. Studies show that this story-based approach can create significant change in people’s worldviews.

Even when you know you’ll create more lasting change through dialogue than exclusion, you may have to push past significant inner resistance to engage in these conversations. Showing any kind of compassion—even tough compassion—to a person who behaves harmfully can feel like a form of surrender, or like tacit acceptance of their behavior.

But from the broader perspective of reducing suffering, what might seem like fraternizing with the enemy can be a potent way to guide someone on to a less toxic path.

“A lot of people have this misunderstanding that, if I engage or listen, I am somehow going to be tainted, or I’m going to be influenced,” Diaz says. When she facilitates these conversations, she’s found that quite the opposite is true. “When you listen, truly understand, and get curious, it creates space for the person to think a little bit differently.”

To avoid shaming the other person into submission—a tactic studies show can backfire by making people withdraw from the situation—you can go on to explain how a change of course would be a win-win scenario, for the other person as well as for the world at large.

“I show them what life might be like after they change and explain the positives,” says Dian Grier, a licensed clinical social worker in Mojave, California. That might mean pointing out that your homophobic relative will have a much better relationship with gay nieces and nephews if he chooses to engage with them differently.

Perhaps the biggest challenge of practicing tough compassion is staying internally grounded while emotional storms rage. When you take a stand, other people may fire back with remarks that send your heart hammering. If you’re not prepared, that physical reaction can propel you straight into a “lizard brain,” fear-based mindset where you’re more likely to fall back on old, reactive rules of engagement.

Tough compassion, by contrast, is like an anchor pole that holds fast no matter how hard the rope tugs on it. “In those moments, I’m trying to be fully present and yet no longer upset,” Franco says. “The intent of every word is thought through to take the argument almost to a different place.”

To hone this kind of in-the-moment composure, it can help to write down some thoughts beforehand about what you want to say to someone or the kind of stories you want to tell. Then, once you’re up for it, schedule a real-life conversation or Zoom. This face-to-face connection often feels more humanizing than a long text thread, and deciding where and when it happens can help you feel more in control of the process.

But while tough-compassion conversations can be fertile ground for shifting others’ perspectives, your own well-being should always remain front and center. To steer clear of potentially traumatic encounters, “you need to know if the other person is in a position to be willing and able to engage in that conversation with you,” Tafur says. “And I think you’ll know that right off the bat.”

If someone ridicules your attempts at dialogue or continues to sling insults, “the tough-compassion act is to leave or disengage,” Keltner says. Exiting from a harmful situation can be its own form of uncompromising truth-telling.

In line with the Buddhist teaching of dropping attachment to results, the tough-compassion approach is simultaneously about holding fast and letting go. At its core, tough compassion is about “creating space for dialogue to unfold,” Diaz says. “Ultimately, that person decides if they’re going to shift.”