As the United States approaches Independence Day 2020, Americans are tearing down monuments. 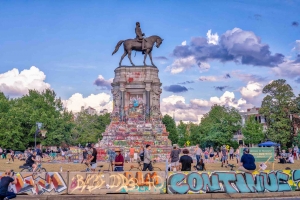 The governor of Virginia is fighting to remove the Robert E. Lee Monument in Richmond. © Mobilus In Mobili / CC BY-SA 2.0

They’re not usually monuments to the history of the United States—almost all of them represent leaders of another country, the Confederate States of America, which rose up against the United States to defend the right to own other human beings. Together with the ongoing coronavirus crisis, the movement against Confederate statues seems to provoke an existential angst among many European Americans.

“We are in midst of an ongoing rampage of nihilism and rank ignorance,” says right-wing commentator Rich Lowry in the National Review. Lowry isn’t alone.

Everywhere we look these days, Americans are confronted with reminders of our own mortality. As coronavirus case counts rise, the monuments of long-dead men to a long-defeated cause are falling—and social conflict and political polarization seem to intensify. Why such antagonism?

One answer may lie in the fact that these crises remind us humans that we pass, that our bodies turn to dust, and that, ultimately, there is nothing left of us. We are forgotten. This existential dilemma is at the heart of one of the most generative theories in social psychology. It is called Terror Management Theory (TMT)—and it is useful as a lens through which to understand the relationships between identity, racism, and toppled Confederate monuments. This theory can help us see that we are experiencing a perfect storm of fear and hate—and it can also help us to see at least one way through.

TMT posits that the terror associated with the awareness of our mortality—our insignificance, our ethereal existence—is so strong that it motivates people to come up with ways to manage it (thus the name of the theory; its focus is on how we cope with the terror). One of them involves aligning ourselves with concepts and ideals that will outlive us, and that we can contribute to. Country, for example, or Tradition, or Religion.

All of these are examples of worldviews: ways of seeing the world as constant, ordered, and stable over time and generations. Worldviews provide us with a sense of permanence, of the existence of something beyond our own bodily manifestations. They serve as a shield against the terror of Nothing. Further, people are motivated to preserve these concepts through symbols that include buildings, laws, and monuments.

Critical to TMT, people’s adherence to and defense of their shields against Nothing should be strongest when people are most aware of their own mortality—in the theory’s terms, when there is mortality salience.

Mortality salience can occur naturally, as when people grow old or ill. But it can also occur in contexts such as war and violence. In other words, when circumstances remind people of their mortality, their terror management mechanisms kick into gear. These include defense of and adherence to country, religion, and tradition, as well as the symbols that represent these worldviews. In addition, intolerance toward those who threaten one’s worldviews should be strongest under mortality salience.

One might argue that COVID-19 is one large experiment in mortality salience.

In 1990 (30 years before the pandemic), Jeff Greenberg and his colleagues conducted a series of studies with Christian participants. Half of them were assigned to write about the thoughts and emotions that the prospect of their own death aroused in them. Afterward, the researchers found that the participants who had been reminded of their own death rated an ostensibly Jewish person more unfavorably, and rated them higher on stereotypically Jewish traits, than when the same person was presented as a fellow Christian.

In other words, under mortality salience, these participants were more intolerant and engaged in greater stereotyping relative to people whose mortality was not salient. The effect was not constrained to religion. In another study of the series, American college students who were reminded of their death showed greater intolerance toward someone who criticized the American government. That person was quoted as saying, “Violent overthrow is the only way the people will ever wrest control of their own nation from the capitalist powerbrokers. Saddest of all, I believe this lofty goal can only be accomplished with the help of outside influence from other powerful nations.” Participants who had been reminded of their favorite foods were significantly more tolerant of this opinion.

In these ways, reminders of our own death can lead to more prejudice against people we see as being outside our own group. To show how the effects of TMT extend to cultural symbols, Greenberg and his colleagues conducted another study in which they made people aware of their mortality. (It included the instruction to “jot down, as specifically as you can, what will happen to you as you physically die and once you are physically dead.” Try it. Not fun.). Another group wrote about watching television.

Participants were then asked to solve a “creativity” task that involved sifting small pebbles from a thick solution. There were different ways to do this, but the most straightforward way was to use an American flag on the table and to pour the solution over it to sift the pebbles out. When participants had been reminded of their own death, they had more trouble solving the task, and reported greater discomfort and reluctance in using the flag for this purpose. This comparison is relative to a group of participants, remember, who had written about watching television, suggesting that thinking about death discouraged people from using the cultural symbol (the flag) in a way that could be perceived as inappropriate.

The parallels to our current situation are straightforward. Not only is the pandemic a huge source of threat, but the political and social protests of 2020 center around the meaning of American identity, and the recognition of past injustices against a minority population. In other words, as is true of many social movements, the Black Lives Matter movement is about the American worldview, and the invisibility of Black perspectives in the dominant narrative.

TMT predicts that for many of those steeped and invested in the dominant worldview, changing the American narrative is an affront to the worldview itself. Within the context of TMT, COVID-19 and Black Lives Matter combine to create an explosive combination of worldview re-examination along with strong mortality salience. (If you are interested in learning more about this topic, I encourage you to read this recent chapter from the Handbook of Prejudice, Stereotyping, and Discrimination, which summarizes much of the work around TMT and prejudice.) These non-stop reminders of our mortality intensify antagonism between social groups.

Does the fear of Nothing mean there’s nothing we can do? Psychological accounts of the world around us, and particularly of prejudice, often leave us feeling like we are wired for hate, and that the human swamps of insecurity and emotion run so deep that we are helpless to change things.

But if anything makes us human, it is the power to reframe. We may have a strong tendency toward prejudice and creating ingroups versus outgroups—us vs. them. Whether it’s innate misses the point, because it turns out that who we consider as us and them is totally malleable. If you remind people who would otherwise dislike each other that they are part of the same team, you’ll see them coming together to cheer. I saw this with my own eyes after 9/11—New Yorkers of all backgrounds and persuasions, coming together as one group after an incredible tragedy. I often say, jokingly, that what we need to start getting along as humans are some hostile extra-terrestrials, just like in the movie Independence Day (do I hear a recommendation for a stay-at-home, Fourth of July movie night?).

We could also come together by activating a tolerant worldview, which research suggests decreases the negative effects of TMT: We may only be able to move forward when we think about who participates in the construction of our shared worldview. Rather than trying to change our need to defend our cultural values when threatened, in other words, we can think about trying to change the cultural values themselves. What if we had leaders who fostered cultural values around tolerance, respect, and inclusion? What if we ourselves, in our circles of influence, were those leaders? If TMT is right, those values should be strengthened under mortality salience, and the pandemic. There is evidence for this effect in TMT research. We can use our own human tendencies to help change our behavior for the better.

We cannot, however, begin that process under a foundation of intolerance, where discussions of history and tradition are done at the expense of others’ humanity. Remember, if you are having trouble understanding negative reactions to Confederate monuments, there may be an opportunity to create something new—something joyous and inclusive—that will live on long after each of us is nothing.