But as eminent and enlightened as Kabat-Zinn appeared on stage, his message was that the audience should not be intimidated by the Tibetan monastics, scientific icons, or other spiritually accomplished thinkers in the room. Instead, we were encouraged to embrace our common humanity—our shared aspiration to relieve suffering and cultivate happiness in life. “We are all contemplatives,” he reassured. 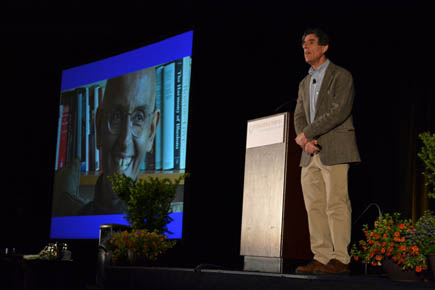 That was arguably the main message of the three-day symposium as a whole. It was possibly the biggest and most far-ranging event organized to date by the Mind and Life Institute, which has been championing dialogue between Buddhist scholars and forward-thinking scientists for 20 years, and it offered a powerful reminder of how vast and mainstream contemplative science has gotten in that time.

The ISCS zeroed in on some of the most impressive scientific insights that have been made in recent years. While Buddhism claims that contemplative practices are key to happiness, modern Western thinking requires quantitative, scientific evidence to embrace and endorse that view. Over the three days of lectures, workshops, and poster sessions, this is where that evidence—along with some of the conceptual chasms that data has yet to resolve—could be found.

Here are three important insights that made an impression on me at the ISCS—areas where researchers are clearly making some ground-breaking findings.

1. We can train our brains to be more compassionate. Two pioneers in this field are Tania Singer, the director of the department of social neuroscience at the Max Planck Institute in Leipzig, Germany, and Richie Davidson, founder of the Center for Investigating Healthy Minds at the University of Wisconsin, Madison. Both have been studying people with more than 10,000 hours of meditation practice under their belts, as well as inexperienced meditators, who they observe before and after meditation training.

Both Singer and Davidson delivered “Master Lectures,” and graduate students and post-docs from their labs spoke on various research panels. Taken together, their data reveals that meditation can change the brain in measurable ways—and in ways that seem linked to care and compassion for others.

For example, when meditation “experts” watched videos of other people suffering, functional magnetic resonance image (fMRI) scans of their brains showed heightened activity primarily in structures that are important to care, nurturance, and positive social affiliation—that is, brain regions that orient them toward the well-being of other people.

In non-meditators, the videos of suffering were more likely to engage brain structures that support unpleasant feelings, such as sadness, aversion, or pain—which, in turn, makes people distressed and want to remove themselves from the situation.

Yet when non-meditators receive training in contemplative practices—specifically those that center on compassion or the Buddhist notion of loving-kindness—Singer and Davidson have observed shifts in brain activity, with relatively less activation in neural structures that support unpleasant feelings and thinking about one’s own self. When these new meditators tried to extend compassion toward sufferers in the videos after as little as a week of training, the researchers saw changes in their brain response that suggest an intentional shift toward greater concern for the victim. With continued training, new meditators’ brains start to resemble the experts’: They more readily and robustly engage the care, nurturance, and social affiliation networks of the brain.

The upshot: Like muscles in the body, the brain is pliable. Singer and Davidson’s labs are uncovering evidence that if we train in a particular way of relating to other people, we may be able to shift our neural response in a direction that is healthier, less stressful, and more “pro-social,” meaning that it’s more strongly oriented to caring for the well-being of others.

Buddhists, however, think of consciousness on very different terms: They see it as something that can’t necessarily be measured physically but that’s most accessible through well-honed introspection. 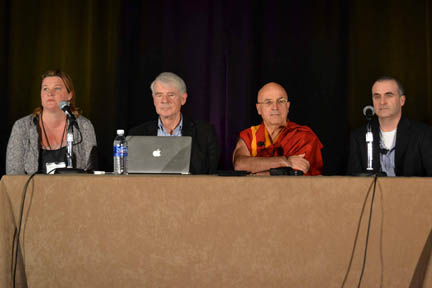 Traditionally, contemplative experts have maintained that the best way to gain insight into the workings of ‘the mind’ is through diligent contemplative practice. But according to Wolf Singer, the director at the Max Planck Institute for Brain Research in Frankfurt, “The brain’s intuitions about its own conditions don’t seem to be very realistic.” But is a more scientific approach to defining consciousness really feasible, or useful in the pursuit human happiness?

In his lecture, Singer presented a concise overview of what recent science has to say about the neural underpinnings of consciousness. In the studies he discussed, research subjects were shown a sequence of very brief images, only some of which they reported seeing consciously (others flew by too quickly to be detected by the conscious brain), while electrophysiological (EEG) data were collected from sensors attached to their scalps.

Results show conscious detection of the images was accompanied by a distinct response in the brain: Large swaths of neurons all around the surface of the brain fired simultaneously approximately 40 to 60 times per second just for a brief moment after the images were presented. When subjects reported not seeing the images, other areas of their brains still registered the images. In the difference between the two responses, suggests Singer, we can start to detect the neural outlines of consciousness.

Singer’s talk was followed by commentary from Matthieu Ricard, a cellular geneticist turned Buddhist monk who is sometimes dubbed “the happiest man in the world,” thanks to his participation in some seminal studies (led by Davidson) on the neuroscience of positive emotion. Ricard questioned the scientist’s attempt to break consciousness down into properties of matter organized in specific ways (e.g, neurons firing in the brain). According to the Buddhist analysis, consciousness is best thought of as a phenomenon that is “a different qualia” than the material world, independent of physical neuronal activity. Ricard maintained that consciousness is best understood through first person experience of “non-dual, luminous consciousness,” or “pure awareness” achieved through deep contemplative practice.

This rich and dynamic exchange revealed an area where substantial opportunities remain for cross-cultural dialogue and discovery.

3. Meditation can make you feel more connected to others. In a cheerful closing panel, Barbara Fredrickson, the director of the Positive Emotions and Psychophysiology Laboratory (a.k.a. PEP Lab) at the University of North Carolina, Chapel Hill, discussed work highlighting the myriad benefits of positive emotion and authentic social connections—benefits potentially augmented by meditation.

She described her recent interest in three related phenomena: 1) the importance of “positivity resonance,” where we momentarily get on someone else’s wavelength, boosting our shared positive experience; 2) “biobehavioral synchrony,” where our bodily processes like heart rhythms and gestures begin to function in synchrony; and 3) mutual care between people. Fredrickson hypothesized that contemplative practices like meditation promote these kinds of experiences—and she has some evidence to back this up 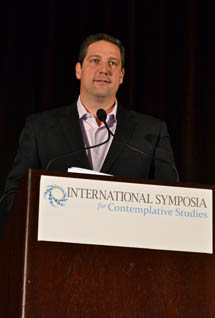 Here’s how: When measuring people’s heart rate, she has looked at something called respiratory sinus arrhythmia (RSA), which is a variation in heart rate affected by a cranial nerve called the Vagus nerve. In other research, GGSC Faculty Director Dacher Keltner has linked the Vagus nerve to the experience of compassion; sure enough, Fredrickson has found that people with higher RSA report more moments of close, warm, positive connection with other people—and the more they report these moments, the more their RSA increases throughout the day.

What’s more, her studies show that learning loving-kindness meditation leads to increased RSA, in conjunction with positive emotion and social connection. So it seems that meditation may encourage an upward spiral of positivity and compassionate connection to others.

Given these benefits, Fredrickson made the case for teaching meditation to kids. It seems tough to argue with her.

This is just a taste of the many provocative and inspiring presentations and workshops at the ICSC. In closing remarks, Richie Davidson pointed out the incredible pace of contemplative science, which has grown from a fringe field 20 years ago to a legitimate area of focus for researchers from top-tier universities nationwide. Davidson was followed by Congressman Tim Ryan, author of the movement-building new book A Mindful Nation, who implored folks in the room to stay the course, elect mindful officials, and get contemplative lobbyists to Washington, DC.

Ryan was barely in elementary school when Kabat-Zinn launched his pioneering work in this field more than 30 years ago. In the arc of the conference from Kabat-Zinn’s opening address to the congressman’s closing remarks, we can see the growth of the field over a generation. Though some open questions clearly remain to be addressed by the dialogue between Buddhist philosophy and Western science, the consensus seems to be rapidly growing that contemplative practice can measurably benefit the health and well-being of individuals, communities, and society at large.

Enjoyed reading this article.  I find it amazing that science is starting to be able to prove that there are benefits to things like meditation.  What I find even more amazing is that people intuitively have known this for a long time. I think that the practice of meditation could end up solving a lot of issues in our society. Once again great article!