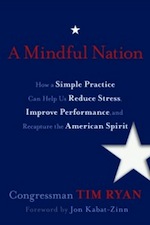 When Congressman Tim Ryan (D-Ohio) first discovered the benefits of mindfulness meditation in 2008, he probably didn’t think he would end up being a spokesman for the practice.

But with his new book, A Mindful Nation: How a Simple Practice Can Help Us Reduce Stress, Improve Performance, and Recapture the American Spirit, he has become just that—an eloquent and enthusiastic proponent for the widespread teaching of mindfulness practices to everyone. He sees it as not only a tool for personal well-being, but as a practice that might help Americans become calmer, more reflective, and less reactive as a people, and move our nation from crisis to prosperity.

Ryan’s book takes readers on a journey from the personal to the political. He describes how he became connected to mindfulness through practitioners and researchers—like Jon Kabat-Zinn and Richie Davison—who taught him the ways mindfulness effects the brain and provides many health and psychological benefits. He suggests that if we all could learn this relatively simple technique for quieting the mind, we would be healthier and happier people for it.

His book is a tour of many of the areas in which mindfulness has been applied with positive results. We see how the work of MindUP and other programs that teach mindfulness to kids, the Garrison Institute’s work with teachers, and CASEL’s social emotional learning programs have all helped to improve student’s emotional experiences, decrease bullying, and improve academic performance. We learn of the applications of mindfulness in health, both in treating disease and in disease prevention. We see how mindfulness can foster creativity and greater productivity in the workplace, or help prepare soldiers for combat as well as prevent them from succumbing to PTSD upon their return from battle.

It’s clear that mindfulness is not a panacea; but it does have practical benefits, and not just for the individual. Ryan provides ample examples of how teaching mindfulness can affect our social institutions and make a difference in our nation’s healing. He seems bent on promoting this idea to a wider audience, getting everyone involved in bettering our nation from the inside out. It’s surprisingly refreshing to see a congressional leader stick his neck out for something like mindfulness, which, after all, is probably not familiar to a large part of America and might even be considered suspect.

And Ryan is in an interesting position: He sits on the House Armed Services Committee and the House Budget Committee, committees that make decisions about funding for education and other social services and provide for the military. Perhaps, with his clout, Ryan can catapult interest in mindfulness and mindfulness research into the public consciousness in a new way. Heaven knows, it’s about time someone in government came up with some practical solutions to our society’s social ills, while still practicing what he preaches.

It seems to me that we have a few problems here. First, we have a member of the Armed Services Committee preaching a quasi-Buddhist religion that has been interpreted by its Western practitioners to mean refraining from judging oneself for thinking certain thoughts or feeling certain emotions. I’m not sure I’m at all comfortable with the idea of life-and-death decisions being made by someone who doesn’t want to judge himself lest he be considered less “mindful.”

The most recent article on this website (8/23/12) discusses a likely inverse correlation between self-forgiveness and empathy. The article recommends maintaining a certain level of guilt and remorse in order to effect positive change. That prescription strikes me as being at odds with the mindfulness concept of non-judgment, for it requires one to deliberately inculcate certain emotions rather than letting whatever comes into your mind wash through without comment.

Presumably, mindfulness practitioners would contend that non-judgment and self-forgiveness are two different concepts, but they seem rather close to me. “I just voted ‘aye’ on a military funding bill that will pay for Predator drones to blow up Afghan children while they tend their goats. But I’m not going to wallow in guilt about it because that would entail excessive self-judgment.” Hmm. Sounds great for him, but not for the larger world that is affected by his decisions.

Why does this bother me so much? In a related comment on Mitt Romney and bullying, I noted that the United States has become an aggressive military empire. The congressmen who sit on the committees that steer that empire have blood on their hands, and they need to judge themselves harshly if this country is to reform its blood-thirsty ways. And talking about techniques to improve the performance of soldiers sounds more like a recipe for enhanced killing machines than a prescription for restorative justice.

Play with mindfulness if you want, but develop a conscience first.