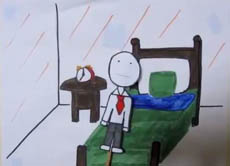 A scene from Bill's Story, the winner of our happiness video competition.

We asked the students to produce a short video illustrating at least one of the key concepts covered in “Human Happiness.” The videos had to be short, draw on the material they covered in class, and answer the question, “What makes you happy?”

We received 60 submissions from more than 100 students—and we’re now pleased to present the winner:

Bill’s Story is a charming short starring a cast of paper dolls. Our judges thought it was a clever and creative illustration of a key scientific finding: that social connections, not wealth or status, are the key to happiness. Plus, it made good use of the bittersweet score from the Pixar film Up.

Watch Bill’s Story below, and definitely also check out the runners-up and the other finalists that earned an honorable mention.