For roughly a decade, positive psychology researchers have studied the strengths and virtues that enable people to lead happier, more fulfilling lives. In Positive Psychology at the Movies, psychologists Ryan Niemiec and Danny Wedding use hundreds of films to illustrate some of these strengths (e.g., bravery, curiosity) and virtues (e.g., temperance, wisdom). In trying to explain the strength of “bravery,” for example, the authors offer an extended analysis of Hotel Rwanda’s protagonist, as well as capsule reviews of films like Schindler’s List and Batman Begins, which they call “particularly striking in its sophisticated perspective on the development and dynamics of bravery.” 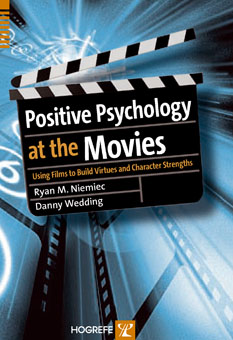 Niemiec and Wedding excel at explaining psychological strengths and concepts, but their descriptions of cinematic strengths are often stilted. For instance, in a typical passage, the spy thriller The Bourne Identity is used to illustrate “the Dialectic Behavior Therapy model of mindfulness”—which may be true, but the non-specialized reader will be left scratching her head. Thus Positive Psychology at the Movies will be most helpful as a reference for those selecting films to use in therapeutic or classroom settings. For others with a special interest in film, it might also serve as a friendly, if somewhat technical, introduction to positive psychology.