City at Peace-New York main¬tains its 12th-floor Manhat¬tan office in a narrow building tucked between a Chinese restaurant and shops selling T-shirts, toys, and televisions in bulk. On a Tuesday evening last fall, five teenage mem¬bers of the youth performing arts group’s production team met there over McDonald’s dinners to hash out their vision for the com¬ing months. The youth—black, white, Asian, and Latino—parsed the mission statement they had written the week before, asking how they should measure their progress in meet¬ing their program goals.

Though the scene may seem ordinary, these program goals are not: they include self-empowerment, violence prevention, and fighting oppression. This is an ambitious agenda—especially for teenagers who will already be writing, starring in, and doing just about everything else necessary to star in an original off-Broadway musical this spring. 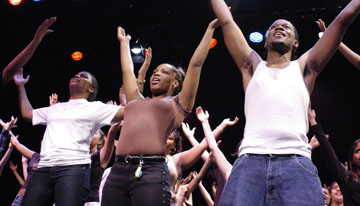 Scene from "Cracks in the Concrete Canvas," last year's original musical written by the cast of City at Peace-New York. © Christopher Smith

City at Peace-New York’s 80-member cast can expect a lot to happen in the months leading up to the musical. Teenagers from all five boroughs of New York City, represent¬ing diverse racial and socioeconomic back¬grounds and different sexual orientations, will make friends with one another. They will gain enormous confidence in them¬selves, on stage and off. They will take away from the program something more profound than they had ever imagined, and the experience will not end when the curtain closes. The production team members know this already, since they have returned for their second or third year at City at Peace.

City at Peace, Inc. began in 1994 in Wash¬ington, D.C., where it is still based, and has since spread to six other U.S. cities—Santa Barbara, Charlotte, New York, Los Angeles, Chicago, and most recently, Baton Rogue— and also to Israel. Paul Griffin, now the artistic director of the New York program, founded the organization with the help of local teens, parents, and community leaders. Although the character of each city shapes the teens’ perceptions, and as such the final product, the underlying goal remains the same: to teach performance skills to youth while building cross-cultural understanding among them—an effort to prevent violence in their lives and provide them with leader¬ship opportunities. With guidance from per¬forming arts professionals, teenagers ages 13 to 19 pursue this goal by creating original musicals from their own life experiences.

Griffin developed the program’s method¬ology over time, and it is based more on his experience as a professional actor than on formal academic theories. But research has borne out what Griffin and others have intu¬ited and observed—that sustained participa¬tion in theater arts among youth contributes to increased self-confidence and motivation, higher levels of empathy and tolerance, and improved academic performance. In a 1999 study of youth involvement in music and theater arts programs, UCLA professor James S. Catterall found that youth with high involvement in the arts scored on aver¬age 16 to 18 percentage points higher on standardized tests and coursework than those with low arts involvement. He also found these youth were more likely to have interracial friendships and a higher percep¬tion of themselves than their peers.

Brittiany Johnson’s experience in City at Peace-New York illuminates Catterall’s find¬ings. When Johnson, 16, began the program, she was a C- student. Now she is an honor-roll student—and student-body president of her Bronx high school. Johnson also reports having a better relationship with her parents since they saw her comic performance in last spring’s production, “Cracks in the Concrete Canvas.”

“They know I’m mature now,” Johnson said of her parents.

The City at Peace experience begins with three months of training in diversity aware¬ness, leadership, violence prevention, and conflict resolution. The teens meet every Saturday for daylong sessions that incorpo¬rate performance techniques into the social training. The day often begins with an improvisation activity, then moves on to an exercise where students write down some of their concerns—thoughts about school, their social lives, their safety. These notes are tacked to a wall, then the students break into groups and create skits acting out the issues they’ve identified. Throughout all activities, City at Peace places great empha¬sis on creating a consistent, comfortable environment for the teens, allowing them to open up in ways that many have never experienced before. At the beginning of the program, returning cast members take the lead in establishing ground rules that include respect, confidentiality, and atten¬tiveness to one another.

They also do trust-building activities and give each other plenty of hugs.

“At City at Peace, nobody judges you— you’re all family,” said Jonathan Cardona, 18, another member of the New York pro¬duction team.

After the initial three months, cast mem¬bers develop and rehearse their show for another three more months—a phase they call “show building”—before staging it for the first time. Then they take two months to refine the production, and stage it again as part of community outreach workshops.

Teens drive the entire program at City at Peace. Griffin and the other adults treat the youth more like collaborators than students. When one cast member expressed skepticism during the September production team meeting, Griffin, boyish himself at 39, was pleased. “That’s good,” he said. For some teens, City at Peace is the only activity in their lives over which they and their peers have complete control. Many must unlearn their habit of letting adults take the lead, and their efforts are rewarded with a sense of ownership in the process and a heightened pride in their product.

City at Peace-New York’s spring 2003 pro¬duction shows just how much the teens are able to confront their complex and some¬times painful reality. “Cracks in the Concrete Canvas” centers on a high school senior’s assignment to write a creative composition on what it’s like growing up in New York City. The show weaves together original songs, dances, raps, and vignettes based on the participants’ own experiences, and the emotional honesty the performers achieve is striking. In one scene, an overworked mother ignores her teenage son’s excitement at his success at an audition. She tells him she needs him to be a man, not a child. When he responds, “Mom, I’m not your husband, I’m your son,” she slaps him.

The performances deal with serious themes, but there’s nothing melodramatic about them. City at Peace holds itself to high production standards, and the New York teens put on a show worthy of the off-Broadway stages they perform on. This helps set City at Peace apart from related programs around the country, said Mary Catherine Bateson, a member of the City at Peace National Advisory Board and a visiting profes¬sor at Harvard University’s Graduate School of Education. Other programs may advocate growth and social change through theater, explained Bateson, but the psychological ele¬ments often overshadow the per¬formance values. At City at Peace, Griffin likes to say, “We’re aiming to do the best show in the city.”

Griffin said he hopes City at Peace will eventually expand to every major city in the country. Instead of “parachuting in” to cities and set¬ting up programs, the organization receives proposals from interested groups nationwide and evaluates them based partly on the local support the groups can generate. There’s no question about the need. Teens from all backgrounds can benefit from an environment where they are not only accepted, but taken seriously, he said.

Bateson’s work has focused on the life cycle and the formative period of adoles¬cence within it. In her “Narratives of Learning” course at Harvard, students examine memoirs in which writers discuss their diverse learning processes. The course is based on the philosophy that profes¬sional educators must expand the ways students can learn outside the classroom, Bateson said. City at Peace is one such example.

“I’ve always believed the best way to get through adolescence is to find an activity that you’re really interested in—you need to have something not laid out by school that you’re passionate about,” she said. When a student finds that interest, Bateson added, “It’s life-changing.”