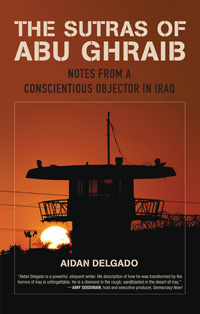 Four years after the invasion of Iraq, the appalling realities of the war have become routine. As the toll of deaths and casualties continues to mount, many American citizens try to block the war—and their role in it—from their minds. But when Aidan Delgado, an American Buddhist, was sent for a year-long military tour in Iraq, he had no choice but to face the reality of the war.

Despite pacifist inclinations rooted in his Buddhist spiritual beliefs, Delgado joined the Army Reserve out of a sense of duty. In The Sutras of Abu Ghraib, Delgado revisits his wartime memories: the rank and file monotony of everyday life, the terror of attack, and the more subtle and sinister transformations inside the soldiers themselves.

As chaos swells around him, Delgado is forced to confront the contradictions between his military actions and his pacifist beliefs. His introspection leads him to the heartfelt but provocative decision to become one of the first conscientious objectors of the war. The Sutras of Abu Ghraib is a moving account of one man’s spiritual and political awakening, but it is also a powerful and far-reaching call for hope and action.