More than any previous generation in history, we have come to see the individual as the sole source of meaning. The gossamer filaments of connection between us and others, which once held together families, communities, and societies, have become attenuated. We have become lonely selves in search of purely personal fulfillment. But this selfish quest must surely be wrong. A life lived alone is only half a life. One spent pursuing the satisfaction of desire is less than satisfying and never actually provides all we desire. So it is worth reminding ourselves that there is such a thing as ethics, and it belongs to the life we live together and the goods we share—the goods that only exist in virtue of being shared.

This speaks to one of Judaism’s most distinctive and challenging ideas: the ethics of responsibility, the idea that God invites us to become, in the rabbinic phrase, His “partners in the work of creation.” The God who created the world in love calls on us to create in love. The God who gave us the gift of freedom asks us to use it to honor and enhance the freedom of others. Life is God’s call to responsibility. 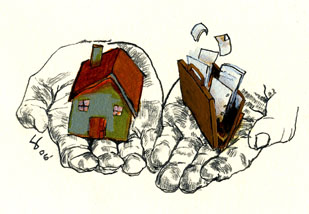 The ethic of responsibility is the best answer I know to the meaning and meaningfulness of life. When I first became a rabbi, the most difficult duty I had to perform was a funeral service. New to the position and the people, I often hardly knew the deceased, while to everyone else present he or she had been a member of the family, or an old and close friend. There was nothing to do but to get help from others. I would ask them what the person who had died meant to them. It did not take long before I recognized a pattern in their replies.

Usually they would say the deceased had been a supportive husband or wife, a loving parent, a loyal friend. They spoke about the good they had done to others, often quietly, discreetly, without ostentation. When you needed them, they were there. They shouldered their responsibilities to the community. They gave to charitable causes, and if they could not give money, they gave time. Those most mourned and missed were not the most successful, rich, or famous. They were the people who enhanced the lives of others. These were the people who were loved.

This reinforced for me the crucial distinction between the urgent and the important. In praise of someone who had died, no one ever spoke about the car they drove, the house they owned, the clothes they wore, the exotic holidays they took. No one’s last thought was ever, “I wish I had spent more time in the office.” The things we spend most of our time pursuing turn out to be curiously irrelevant when it comes to seeing the value of a life as a whole. They are urgent but not important, and in the crush and press of daily life, the urgent tends to win out over the important.

Happiness, as opposed to pleasure, is a matter of a life well lived, one that honors the important, not just the urgent. This has been confirmed by many recent research studies. One showed that life satisfaction increased 24 percent with a person’s level of altruistic activity. Another discovered that those who had more opportunities to help others felt 11 percent better about themselves. Several studies have shown that the best predictor of happiness is the sense that you have a purpose in life. Those who hold strong spiritual beliefs are typically satisfied with life, while those who have no spiritual beliefs are typically unsatisfied. People who feel responsible for their lives express one-third more life satisfaction than those who feel they lack control. When subjects were asked to choose any of 20 different factors contributing to happiness, there was only one no one chose: financial status. People who own the most are only as happy as those who have the least, and half as happy as those who are content with what they have. The desire to give is stronger than the desire to have. This alone is enough to defeat cynicism and fatalism about the human condition.

Happiness is the ability to say: I lived for certain values and acted on them. I was part of a family, embracing it and being embraced by it. I was part of a community, honoring its traditions, sharing its griefs and joys, ready to help others, knowing that they were ready to help me. I did not only ask what I could take; I asked what I could contribute. To know that you made a difference, that in this all-too-brief span of years you lifted someone’s spirits, relieved someone’s poverty or loneliness, or brought to the world a moment of grace or justice that would not have happened had it not been for you—these are as close as we get to the meaningfulness of a life, and they are matters of everyday rather than heroic virtue.