My husband is a successful lawyer at a national law firm and works on cases he feels passionate about, mainly toxic tort and consumer protection lawsuits. He is definitely a hard worker and a very smart, talented person. But, as he will readily admit, much of how he got to where he is has to do with luck, too—being in the right place at the right time and connecting with someone who believed in him.

This random path to success is the subject of a new book, Success and Luck: Good Fortune and the Myth of Meritocracy, by economist Robert Frank of Cornell University. Though we Americans tend to think that we are the masters of our own destiny and that hard work pays off, we are only partly right: Many of us succeed at work and in life because of luck, too. 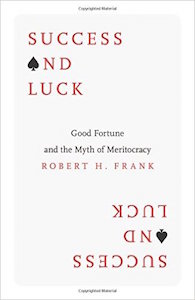 Frank gives plenty of examples from his own life to illustrate how luck made a difference. We learn of his own two near-death experiences and how, by luck, he survived, as well as how happenstance put him in touch with his birth mother in his 30s. We also hear from many educators, inventors, actors, and businesspeople who happened upon the right idea or opportunity through accidental encounters or events that propelled them down their current path.

All of this makes for entertaining reading. But why is it important for us to consider beyond that? Frank believes that not seeing the role that luck plays in our lives makes us less sympathetic to why others fail and blinds us to their disadvantages.

While the American Dream suggests all that’s needed is talent and perseverance to get ahead, this is false thinking, says Frank. The family we are born into (and even birth order), the opportunities available in our neighborhood, the schools we attend, and whether or not we have positive adult mentors—all of which are beyond our individual control—also play an important role. If we ignore this—if we perpetuate the myth that only the deserving succeed—we will not be able to create the social change needed to better our lives.

“If being born in a good environment is one of the luckiest things that can happen to anyone, it is failure to appreciate luck’s importance that has done the most to undermine our collective stock of good fortune,” writes Frank.

Frank argues that the reason we are blind to luck is that we are unaware of the many psychological biases we hold that create the illusion of personal merit. For example, there’s the halo effect, in which we will ascribe positive qualities to people who are successful or who receive a positive review in some way. There’s hindsight bias, where, after an event has occurred, we tend to believe it was predictable, even though there’s no evidence for that. And there’s the good old attribution bias, where we tend to see environmental circumstances creating our own failures, while attributing others’ failures to their character.

Here’s how these biases might translate: If I’m the head of a successful company, I (and others) will tend to believe it’s because of my good character and because of my business smarts—when, in fact, it may have had more to do with benefits I received from my parents, the school I attended, chance meetings with people who could further my career, or unpredictable changes in the marketplace.

Does this mean that hard work or talent don’t matter at all? No, says Frank. Hard work and smarts do matter, just not as much as we may think. And, by clinging too much to these explanations, believing we deserve our fortune, we are less likely to treat others with empathy or fairness.

As an illustration, Frank recalls a study by the Greater Good Science Center’s Dacher Keltner, in which three students were put into a lab and one student was randomly assigned to be the group leader while they all worked on a task together. Thirty minutes into the experiment, four chocolate chip cookies were brought in on a plate and put in the center of the table. In most cases, the assigned “leader” took the extra cookie and ate it (often noisily and greedily), as if he or she deserved it. This study demonstrates how easy it is for us to lose sight of luck and randomness, and how power can corrupt our self-perception and relationships with others. Other studies support the theory that when we are in a power position, we tend to not treat others with consideration…or even to see their needs.

Luckily Frank has some solutions, one of which is cultivating gratitude. In an experiment by his research assistant, Yuezhou Huo, subjects were asked to recall a good thing that happened to them recently and then to list either 1) external factors beyond their control, 2) personal qualities they possessed or actions they took, or, as a control, 3) simply “reasons” that explained why the event occurred.

Afterwards, they were given an opportunity to donate part of their participation fee to a charity. Those who were asked to list external reasons for their good fortune gave 25 percent more to charities than the group that had listed personal qualities, while the control group gave a percentage somewhere between the two extremes. In other words, gratitude for what we’ve been given in life (and have little control over) may contribute to generosity toward others.

Frank also suggests significant tax increases for the very wealthy based on a “progressive consumption tax”—a tax based on the difference between income and savings rather than income levels alone. Sounds like simple liberal politics at first; but Frank backs up his suggestion with economic theory and psychological research that shows why this would work.

For one thing, relative purchase power remains unchanged when taxes on the very wealthy are increased, so that individuals would not be hurt by these changes while redistributing wealth would help everyone (including the wealthy). Although people don’t like to pay taxes, in part because of a phenomenon known as loss aversion, Frank insists that taxes are an important investment in the future of society and the means for fixing our crumbling infrastructure, environmental challenges, and educational system.

A progressive consumption tax also makes sense psychologically, Frank writes. He explains how scientists have shown our nearby frames of reference matter a lot in understanding how we see ourselves and how happy we are. When the super wealthy spend extravagantly on themselves, it affects spending down the income ladder, pushing those with less to stretch their financial limits in order to keep up. And people can’t simply recognize this tendency and opt out, because not keeping up with relative spending can have real social consequences, including not being able to get your kids into good schools.

While many of the wealthy might have trouble seeing the upside for them, Frank insists that this kind of taxation would not decrease their standing in society and would increase their well-being. Research has shown that, beyond a certain limit, spending more on yourself doesn’t make you any happier. In fact, the key to happiness for everyone is spending more on other people and living in a more equitable society.

“If all mansions were a little smaller, all cars a little less expensive, all diamonds a little more modest, and all celebrations a little less costly, the standards that define ‘special’ in each case would adjust accordingly, leaving successful people just as happy as before,” he writes.

And, of course, the costs of not doing something to decrease wealth inequality are high. As Robert Putnam wrote about eloquently in his book, Our Kids, wealth inequality is creating larger and larger gaps in opportunity. In one eye-opening Department of Education study Frank recalls in his book, children from poor families who scored high in math aptitude in 8th grade were less likely to finish college than children from wealthy families who scored in the lowest percentiles in math. This is clearly a problem.

Frank’s book gives a compelling argument for why we should consider our collective needs more when we look to change society for the better. Not only does it make economic and political sense, it is based on the social reality of our lives and our needs for greater cooperation and trust. Frank is optimistic that convincing the wealthy to eschew runaway spending on themselves and to equalize the wealth in society through changes in tax policies will lead to a much happier, healthier state. And, it won’t cost the wealthy in any real substantial way, while providing real benefits to our fellow citizens.

“There simply is no conflict between morality and self-interest,” he writes.