This Halloween, people in many places will be wearing two kinds of masks: one to be scary, the other to protect themselves and others against COVID-19.

Yes, it’s another pandemic Halloween—and while the masks we wear might seem weird, the really weird stuff is happening inside our heads. Masks have roots going back to at least Neolithic times, and they’re capable of pushing some deep evolutionary buttons, triggering fear, laughter, aggression, awe, and many more emotions. That’s a feature, not a bug, of masks.

Here’s a rundown of the reasons why human beings have crafted and worn masks for at least ten thousand years. These insights go a long way to explaining the way we celebrate Halloween, but they also suggest why masks have become such an emotional flashpoint in the COVID-19 pandemic.

The 9,000-year-old mask found in the Hebron hills by a settler going for a walk.
Credit: Antiquities Theft Prevention Unit, Israel Antiquities Authority

It’s hard to say, because the archeological record is so inherently murky; masks made in prehistoric times of leather or plants could not survive the centuries. In 2018, an Israeli settler found what is believed to be the oldest known mask in the world in the West Bank. Estimated to be ten millennia old, the stone face was almost certainly used in religious ritual as humanity transitioned from hunting and gathering to growing our own food—probably as part of ancestor worship, according to archeologists.

Similarly, in the Egypt of the pharaohs, masks were used to connect the dead with the living, making them a kind of conduit between this world and the next. Mummies were fitted with masks in the likeness of the deceased so that the soul could locate the right body, when the time came. Priests wore the heads of animals who represented their gods: a jackal for Anubis, god of death; a cat for Bastet, goddess of fertility and sexuality; a bird for Thoth, god of knowledge and of writing, which was then a cutting-edge technology. Throughout African history, masks have played a role in religious ceremonies. The Yoruba, Igbo, and Edo cultures of West Africa all held masquerades to commune with ancestors.

The Native Americans who lived along the west coast of North America devised incredibly clever, two-layered mechanical masks in which an outer animal face moved to reveal a human image. In other words, the mask was a way to reveal the essential oneness of humanity and the natural world. 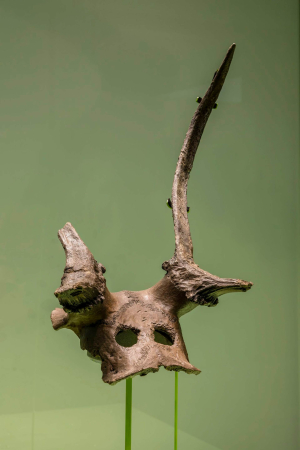 That human-animal connection led many ancient peoples to wear masks in hunting.

There is some evidence—mainly in petroglyphs—that early Stone Age hunters wore them in stalking prey. According to anthropologists, this was in part for camouflage; sometimes, the masks were made from the hide or fur of the prey to disguise the human scent.

However, masks that resembled the animal being hunted served psychological purposes, as well. They may have helped the hunter think like their prey. Hunters wore the masks in rituals performed before the hunt, and in dances and theatrical productions depicting their success. In some cultures, the masks were used to give the slain animal’s spirit a home, so that it would not return from the dead seeking revenge.

It’s a tradition that continues to this day, when hunting face masks help to keep the hunter warm and provide camouflage. While today’s hunting manuals may frame the mask as a practical necessity, it’s hard to avoid associations with atavistic practices.

3. In wars and in sports

Masks are ubiquitous in both ancient and modern warfare. As in hunting, they can serve two purposes, protective and psychological.

Helmets and masks might seem to have an obvious mission in warfare: to protect the human brain inside of them from enemies who aim to stop the brain from functioning. But the archeological and historical evidence suggests that the more important purpose was to scare the enemy.

War paint is a kind of mask, though it does little to protect the warrior. War masks existed in ancient Greece, Rome, and China, but they were often mounted on shields or armor instead of over faces. Japanese samurai wore grimacing menpō—half masks covering the face below the eyes.

Today, the gas mask is the one we associate most closely with modern warfare. This image emerged with the use of chemical weapons during the first world war. Though its purpose is protective, the image still strikes fear into our hearts—and the gas mask is widely used as a symbol of apocalyptic warfare.

After that war, artists created “broken face” masks depicting war-ruined visages for books and films to help reveal its cost. Today, video games like “Call of Duty” feature a “ghost mask”—a skull over the face—but you can now buy a real one for cosplaying, paintball, or airsoft combat simulations.

In modern sports, fencers, baseball catchers, and skiers all wear masks intended to be protective. But the masks can still tap into feelings of fear by merely obscuring the face of an opponent, making them seem inhuman—which is why some hockey goalie masks are designed to look creepy, calling to mind characters from horror and superhero movies.

Onnamen are wooden masks of female faces, worn by men, which have been used since the 15th century in Japanese Noh theater.
Credit: Japanese Clothing

As we’ve seen so far, masks are fundamentally performative even in the most deadly real-life situations. It therefore makes intuitive sense that masks would migrate from religious ceremonies and warfare onto stages and ballrooms.

The theatrical mask emerged in the Greek city states, according to most evidence. At first, simple masks of goatskin or linen enabled priests to speak with the voice of a god in the temple, but when playwright-poets like Thespis started depicting such scenes on the stage, they became a literary device. As time went on, the masks of Greek theater became increasingly artistic and elaborate, often with built-in megaphones so that the audience could hear the actors.

Later in human history, masks appeared in Medieval “mystery plays” and the Renaissance-era commedia dell’arte, which applied Roman imagery to satirize contemporary manners. Lacquered, gilded masks are inherent to Noh drama in Japan, and they grew to encompass five distinct types: old persons, goddesses, gods, devils, and goblins. Within those types, masks are color-coded to characterize qualities like corruption and righteousness—foreshadowing modern efforts to scientifically map emotions on the human face. 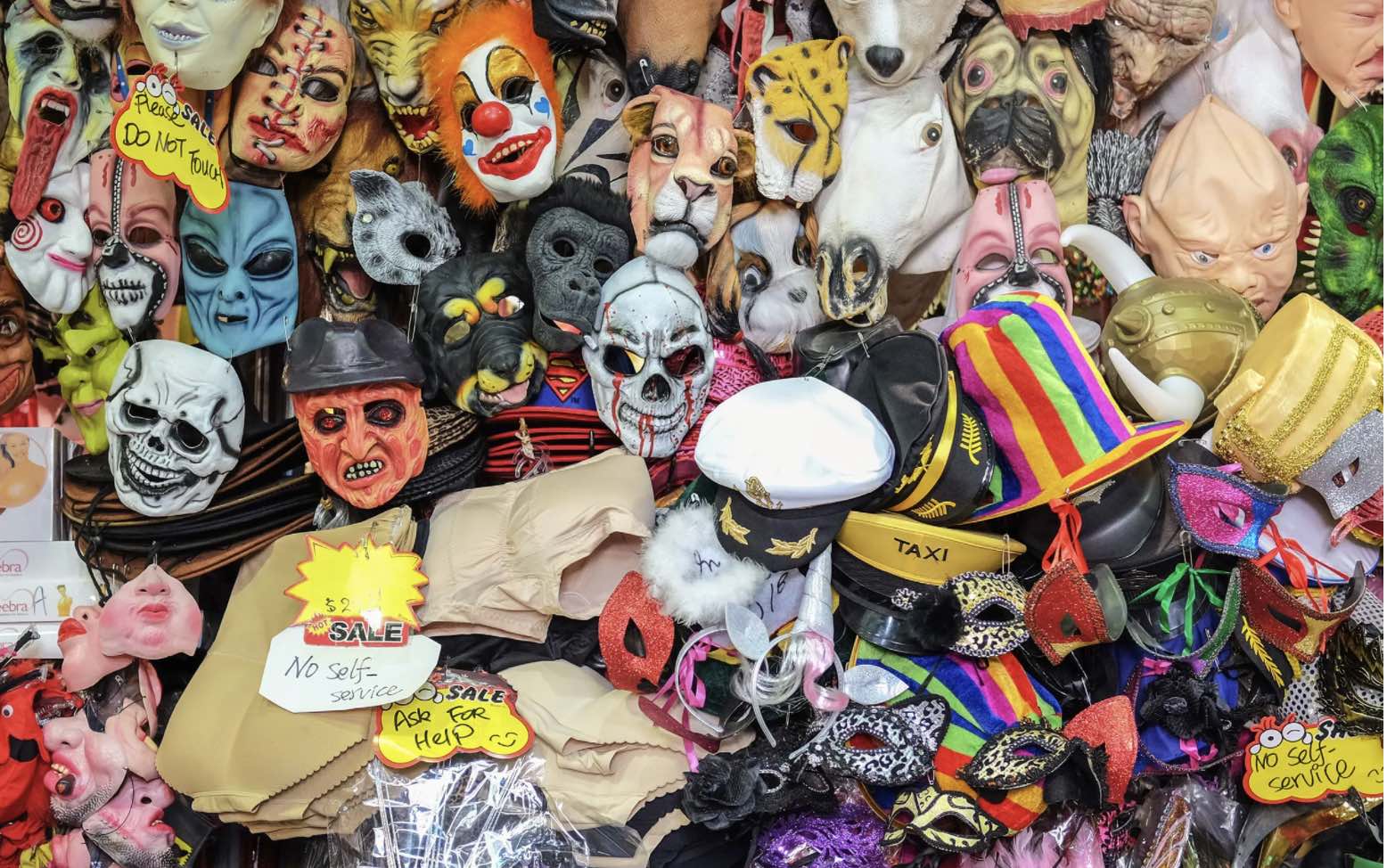 Inevitably, masks stepped back off the stage into the balls of Venice and Vienna, religious bacchanals like Mardi Gras—and celebrations like Halloween. Celtic pagans came to believe that ghosts came out as winter arrived, and they started wearing masks outside to avoid being recognized by dead relatives and enemies. The Roman Catholic Church co-opted these autumnal pagan beliefs into All Hallows or All Saints’ Day, which was intended to honor all the saints.

Today, secular Halloween is a big business and an annual part of many cultures. You can buy a costume off the rack or you can make your own—and on Halloween night, you can encounter anything on the street from a ghost in a simple white sheet to characters from the latest Hollywood blockbusters.

It’s all good fun, but behind the monster-masks deeper, darker traditions lurk. On Halloween, if you know what to look for, you can see masks that echo earlier times in human history, when we saw them as ways to survive violence and starvation, and to commune with gods, spirits, and animals.

6. For protection from disease 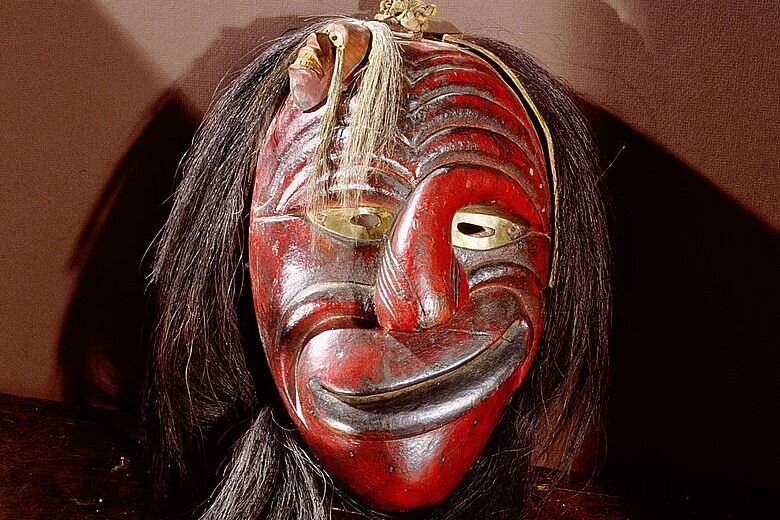 Masks have always been used to fight disease, though the reasoning has evolved quite a bit over the centuries.

In some cultures, for example, members would wear masks to drive disease out of their village. Members of the False Face Society of the Iroquois people wore grotesque masks made of horsehair and metal to drive away the demons of disease; there are similar traditions throughout Asia.

When the bubonic plague swept Europe in the Middle Ages, doctors supposedly wore beak-like masks filled with herbs and liquids intended (in some vague way) to protect them against “spoiled air” from the East that many thought caused the epidemic. In the 19th century, this instinct to cover the face against disease got some scientific validation through the work of scientists like Joseph Lister, Louis Pasteur, and (later) Carl Friedrich Flügge.

However, surgical masks were not widely used until the early 20th century, and they were not standard until the 1940s. During the Spanish flu pandemic of 1918–19—which killed an estimated 50 million people—masks became a point of conflict in western American cities. The “Anti-Mask League” formed in San Francisco, with members claiming that mask mandates infringed on their personal freedom.

“Some people argue against them because they say that they create fear in the public, and that we want to keep people calm,” notes historian Nancy Bristow, author of American Pandemic: The Lost Worlds of the 1918 Influenza Epidemic. Many of the same arguments emerged one hundred years later, when COVID-19 reached the United States—but the difference between then and now is that today, we have robust scientific consensus that widespread, correct use of masks prevents the spread of disease.

Unfortunately, all the evidence in the world can’t necessarily overcome the emotional distrust and anxiety masks induce in some people. Given what we know about the history of masks, this isn’t surprising. It’s also the case that the masks we wear to protect each other from COVID-19 break the link between our upper and lower faces, which makes it harder for us to identify people and their emotions. That can create an additional layer of anxiety.

Even so, studies conducted during the pandemic find that masks can actually increase social trust, because, write one group of researchers, “facemasks are taken as a proxy of social compliance and caring.” For that to happen, however, people need to understand that masks work as one way to help stop COVID-19.

On this year’s All Hallows Day, we’ll once again walk through a space where the mythical past meets the scientific present in the form of the masks we wear. These might not be the Halloweens we want, but they could end up being the most meaningful in our lifetimes.