You’re walking alone in the dark when suddenly arms grab you from behind. You turn around and see…a demonic clown, who proceeds to stab you with a fake blade and lock you in a coffin. 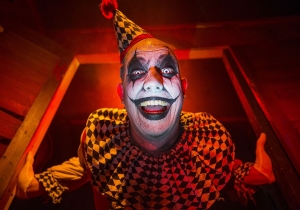 Watch out for this clown in the ScareHouse Basement.

This is the genre of thrills you can expect at the ScareHouse Basement in Pittsburgh, Pennsylvania, a haunted attraction for people over 18 that promises “intense and R-rated horrors.” As Halloween approaches, people are flocking to such experiences all over the country.

But why? That’s the question posed by Margee Kerr, a former sociologist for ScareHouse and now an adjunct professor at the University of Pittsburgh, in a recent paper published in the journal Emotion. We typically try to ward off negative feelings in our everyday lives, and yet people happily fork over $31 for an evening of terror, disgust, and anxiety.

Kerr and her team created a makeshift lab in the basement of ScareHouse, putting lab equipment in a bathtub and a testing station in a closet. She recruited people who had already bought tickets to complete surveys and have their brain activity recorded with electroencephalography (EEG) before and after the ScareHouse experience.

Attendees reported on their mood—how much they felt a variety of emotions, such as happy, sad, or angry, and how they felt overall, from awful to wonderful. They also answered a few questions about what the experience made them think and feel. Then, researchers fitted electrodes to their heads and tracked brain wave patterns as they completed some mental tasks and looked at a series of pictures—some incredibly happy and others violent or tragic.

The results showed that participants were in a better mood after 35 minutes of intense thrills—particularly those who went in feeling frustrated, bored, or stressed. The experience tended to wake people up out of their tiredness, as you might expect, and it also made them less anxious—perhaps because they were no longer anticipating a hood being thrown over their head or their lips getting fake-sewn together.

In comparing before-and-after EEG readings, the researchers found that their “neural reactivity” tended to decrease for a variety of the tasks and pictures. In other words, their brains were less active, using fewer resources and probably thinking less. Markedly, this was true for certain unpleasant pictures and tasks, like ruminating on a problem in their lives.

To the researchers, these findings suggest that extreme fear may be a form of recalibration, making other things—that don’t involve demons yelling in your face—seem less scary and stressful in the future. This is consistent with the fact that people who said ScareHouse challenged their fears were in a better mood afterward compared to those who didn’t.

“Within the context of safety and control, guests allow themselves to ‘lean in’ to the fear-inducing experience,” write Kerr and her coauthors. It “offers opportunities to ‘practice’ aspects of endurance and distress tolerance, potentially resulting in bolstered resilience.”

That could be the same reason why some of us are driven to watch scary or tragic movies, despite the goosebumps and tears they induce at the time.

This study may also have implications for people suffering from mental illness. Many treatments for depression or anxiety, for example, attempt to mute negative feelings. In contrast, this experiment suggests that heightened unpleasant feelings can shock our emotional system in a helpful way. This approach is similar in some ways to exposure therapy for confronting fears, except it adds a fun and social element.

For ScareHouse attendees, the experience was scary, revolting, and uncomfortable—and nearly 90 percent of them wanted to do it again.