What is time-out? Parents disagree. 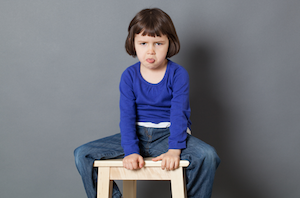 In a recent study, Andrew Riley and colleagues surveyed over 400 parents of one- to 10-year-olds and found that more than three quarters of them used time-out—but their motivations and implementation varied a great deal.

Some use it when they can’t stand their children crying or squabbling anymore—when, in other words, it’s the parent who needs a break. Others take it to a furiously punitive extreme: “Stop pounding the table or I’ll never let you leave your room!” Still other parents frame it as a time for the child to settle down. In many cases, the time-out is a last resort, when other measures have failed; sometimes, it’s the go-to response to any rule-breaking behavior.

Thus, it’s not surprising that time-out is a source of mixed feelings and misunderstanding. A 2014 study by Amy Drayton and colleagues found that time-out guidance on the Internet, including from respected sources, was mostly incomplete or inaccurate. In a recent research review, Anil Chacko and colleagues found that half of parents of kids who would most likely benefit from time-out training either didn’t attend or dropped out.

In another recent study, Drayton and colleagues found that only two of 58 moms of two- to 12-year-olds described time-out in a way consistent with the science behind it: “removal of the child from a reinforcing environment and placing the child in a less reinforcing environment to decrease undesired behavior” (more on this below). Instead, they found half of moms believed the purpose of time-out was to “think” or “calm down.”

These findings might explain why some parents—not to mention their kids!—are frustrated with time-outs. Part of the problem, as this research suggests, is that parents aren’t considering time-outs in the context of other measures to encourage prosocial behavior or emotional regulation. Effective time-outs need a well-thought-out plan and commitment to consistency. Parents decide in advance what behaviors meet time-out criteria and talk about it with kids outside of time-out.

So, what can parents do to make time-out effective? In the same study, Riley and colleagues compiled six key ingredients from research on time-out.

1. Use time-out in conjunction with time-in

Time-outs are effective when they immediately and consistently follow a behavior. What does that look like? For example, if in one moment a kid hits the family dog, then an effective time-out follows in the next moment—rather than five minutes later— every time it happens and without multiple warnings.

Time-out is a boring time located away from fun or attention. Anything entertaining and engaging—toys, games, parents’ unintentional negative attention—is removed from the setting.

4. Set a timer and make it brief

Time-out of a set time as short as two minutes is effective; longer durations usually don’t work any better, especially for young kids. Parents in the study by Riley and colleagues whose time-outs were of a set duration reported more effective time-outs than parents who did not.

5. You decide when it’s over

Parents, not kids, end time-outs. Riley and colleagues found that parents who required their kids were calm before the end of time-out reported more effective time-outs than parents who did not have this requirement.

Riley and colleagues note that because kids may try to leave time-out before parents tell them it’s over, parents should be ready with a plan B. They recommend returning kids back to time-out or taking away privileges as a consequence. Parents in Riley and colleagues’ study who told their kids to go back to time-out if they left early reported more effective time-outs than parents who did not follow through.

Let’s take an example: hitting the family dog. Immediately and consistently, you should calmly and authoritatively say, “Time-out for hitting,” and direct the kid to a quiet, boring location away from others and toys. Be ready to pull out plan B just in case. After two minutes, say, “Your time-out is over.” At that point, the kid returns to time-in, with positive reinforcement: “I really like how you’re being gentle with Fido!” Analyze time-in to ensure that it’s filled with positive attention and experiences when kids are following rules. Apart from time-out, scrutinize the circumstances that precede and follow a behavior that contribute to the problem and adjust them in light of kids’ developmental expectations.