Some years ago, I helped tend to a friend of mine who was dying of cancer. Near the end of his life, he had reached a place of equanimity around dying.

But instead of honoring his wishes for a peaceful death, his doctors ordered aggressive chemotherapy treatment, which did nothing to halt his cancer. The treatments caused him immense suffering, rendering him unable to sleep, eat, or converse with family and friends as he was dying. 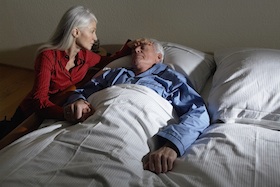 Unfortunately, deaths like my friend’s are not that rare. Though more than 70 percent of Americans surveyed say they want to die in their own home without unnecessary procedures to extend their lives, 50 percent of all deaths occurs in facilities away from home. Of those, 40 percent occur in ICU’s, where physicians are charged with doing everything they can to keep a person alive, regardless of the outcome.

Sometimes, the quest to avoid death can seem extreme, like in the much-publicized cases of Terry Shiavo and Marlise Munoz, where unnecessary life-extending procedures created exorbitant medical bills and emotionally burdened their loved ones.

But, if Shiavo and Munoz are examples of a bad death, is there any better way? Is a “good death” just an oxymoron? Or can the experience of death be far more positive—an opportunity for growth and meaning?

Listening to the dying

These are questions that I first began to consider when I was a young psychologist at the oncology unit at UCSF in the mid-1970’s. At that time, I was the first and only mental health worker on the staff on a 40-bed unit. Modern palliative care was not widely understood or employed yet, and hospice care was not as readily accessible as it is now. My job was to help these patients with whatever emerged psychologically around their deaths.

And, there was a lot going on psychologically which wasn’t being attended to. The physicians and nurses in our unit were talented, skilled, well-intentioned people. But they focused on staving off death at all costs.  Their training gave no guidance on how to provide their patients with the conditions for a good death—one that allowed patients to come to terms with their life and find peace and wellbeing at the end.

Since then, I’ve worked with hundreds of dying people. To help combat the lack of trained support staff, I founded Shanti—a peer counseling program that provides compassionate, trained listeners to help patients and their families through serious illness and the transition of dying. Shanti volunteers have supported many people facing death to do so with grace through their presence and compassion.

What I’ve learned through my experience is that what people most need on their deathbed is to be heard—to have their wishes considered and, whenever possible, fulfilled. But even with Shanti’s success, and the proliferation of palliative care programs and hospices around the nation, there are still many dying Americans who don’t get that chance. Here are seven ways to help create the conditions for a good death.

How to die well

1. Experience as little pain as possible.

When I talk of being pain-free, I mean physically, psycho-socially, and spiritually pain-free. Nowadays, there are medications that can manage most people’s physical pain and make them far more comfortable, and these should not be denied to any patient. Spiritual pain can occur, too. In fact, I have sat with several clergy who had crises of faith on their deathbeds. Sometimes, easing spiritual pain can be accomplished by the presence of a person of faith or readings from sacred texts; other times, it’s better to have someone who can engage in spiritual questioning. Either way, spiritual issues are common at the end of life, and they need attention.

We must also recognize psycho-social pain, the residue of life’s unresolved conflicts with other people. There are almost always interpersonal issues within families, and sometimes between close friends, when one is dying—people who’ve become estranged, “I love you”’s that were never expressed, and more. Ira Byock, a palliative care doctor, wrote in his book, The Four Things That Matter Most, that there are four basic messages a person needs to communicate at the end of life:

I love you.
Thank you.
I forgive you.
Please forgive me.

These, I think, are a good start. A good death creates a space for people to say those words.

3. Satisfy any remaining wishes that are consistent with their present condition.

Some people want to live long enough to go to a grandson’s graduation, to see a book published, to see a cousin they were close to who lives 3000 miles away. But, be careful that these are the wishes of the patient and not just the patient’s significant others. There’s a difference between a good death and an appropriated death—one that’s stolen from the dying person by other forces, including the agenda of close family members.

4. Review their life to find meaning.

There are two main ways that people on their deathbeds find meaning: in the recognition of all of the people they have loved and who have loved them, and in the work that they’ve done that has contributed to the greater good. In some cases, contributory work will be obvious; in others, it may be less so. But, helping the dying to articulate what brought meaning to their lives will help them feel more at peace with their death.

5. Hand over control to a trusted person, someone committed to helping them have the kind of death they desire.

The whole issue of deathbed conversations—asking a person what he needs or wants—is very important. What does the dying person want? How can they get that? Is it reasonable? Sometimes it’s not reasonable: A friend’s dying mother wanted help in ending her own life; well, that wasn’t going to happen. Sometimes you can have the conversation without acting on it, and any conflicts or issues can be addressed.

6. Be protected from needless procedures that serve to only dehumanize and demean without much or any benefit.

Emergency rooms, ICU’s, and 911 are set up to preserve life and are not typically supportive of the conditions for a good death. If a person is suffering tremendously, there may be cause to get emergency help; but for most situations, when you throw a person into the larger healthcare system, the prevention of death becomes the imperative, and that can serve to increase suffering for the dying person. One has to be very persistent and clear to avoid procedures that are unwanted—to insist on palliative or hospice care, instead. It can help to have an advanced directive or a “physician-orders for life sustaining treatment” in writing and communicated to loved ones; but often a person also needs a vocal advocate—a family member, friend, or volunteer caregiver.

7. Decide how social and how alert they want to be.

Sometimes a dying person wants solitude; sometimes he or she wants friends and family around. Whatever the case, the dying person should decide. And, though trickier, dying people should be allowed to decide how much consciousness they want. Some people want to sleep all of the time; others want to be alert as much as possible. Once these wishes are known, an advocate can help make that happen.

A good death is possible 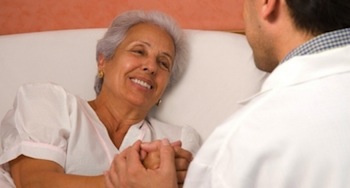 People who are dying should be treated as living human beings. They will have good and bad days. The important thing for caregivers is to be mindfully present. The poet John Milton wrote, “They also serve who only stand and wait.” We are so addicted to action that it may feel like we’re doing nothing if we just sit by someone’s deathbed. But it’s often very important to bear witness and listen or hold a hand.

The potential for growth through dying is definitely there. It doesn’t mean it will automatically happen, though. Death can bring out our goodness—our capacity to transcend, love, and grow—or it can bring out our capacity to hate, create enemies, and deteriorate psychologically. To help promote the former, we should create sacred spaces for those who are dying so that they can benefit most from the experience. If we know the conditions for a good death, we are more apt to prepare ourselves and the ones we love to die with dignity and the sense of a life well-lived, rather than treating death as a calamity requiring a trip to the hospital.

A good death is no oxymoron. It’s within everyone’s realm of possibility. We need only realize its potential and prepare ourselves to meet it mindfully, with compassion and courage.