It’s nine o’clock on a school night and 12-year-old Jesse is absorbed in his favorite video game—until his mother comes into his bedroom and announces that it’s bedtime. 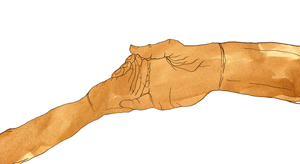 Mom: But it’s already past your bedtime, and you know you have to get your rest.

Jesse: But I’m not tired!

Mom: Well, you will be in the morning if you don’t go to sleep soon.

Jesse: Shut up. Anyway, you can’t make me go to sleep.

The conversation might go on this way until Mom, exhausted and angry, shouts something like, “I quit! Suit yourself!”

Sound familiar? It does to us. In our experiences leading parenting workshops in Nonviolent Communication—a way of communicating that facilitates honest, respectful, and compassionate connection between people—we’ve seen countless parents frustrated by the combative exchanges they have with their children. Their conflicts are especially intense around daily activities such as going to sleep, waking up, and completing homework. Indeed, many parents today find themselves engaged in what seems like a constant power struggle with their kids. As they engage in arguments like the one between Jesse and his mother, both sides stake out their territory and resist giving in to the other. Parents come away feeling worn out and irritated; children feel threatened and even more determined to resist their parents’ demands.

Based on our years of observation, we believe the way through these conflicts lies in shifting the way parents use their power, from using power over kids to using power with them. In the example above, the mother’s attempt to control her son, though well-intended, triggers resistance—as will any attempt by one person to control another, no matter the age or relationship. As Christopher Boehm demonstrates in his essay in this issue of Greater Good, humans have been genetically predisposed to resent and resist being dominated for at least seven million years. While we may temporarily submit, we often do so with anger or resentment that will surface later. And when parents try to manage and control their children, everyone pays a high price—especially in the loss of trust, goodwill, and willing cooperation among family members.

This does not mean that parents should give up their power and permit their children to do whatever they want, whenever they please. Instead, what matters is how parents use their power.

Parents who use their considerable power over children—by making demands and enforcing them with threats of punishment and promises of reward—often find themselves locked into bitter struggles. Fiercely protecting their autonomy, wary children test us to find out where they can get some power of their own. And, very early on, they take charge of two crucial realms of their lives: where and when they sleep; and what, where, and when they eat. Try as they might, parents can’t make children eat, nor can they make them sleep. Their needs for power and autonomy are so strong that kids will sometimes deny themselves their basic needs for food and rest in order to assert control over their lives.

Even when children don’t immediately or obviously resist parental demands, parents may still be creating an unhealthy environment for their family when they attempt to exert power over their kids. Marshall Rosenberg, the founder of Nonviolent Communication, makes this point when he asks parents two questions: What do you want your children to do? and What do you want their reason to be for doing it?

Many parents ask themselves only the first question and find they can, at times, get what they want by using threats, punishments, and rewards. However, when parents ask themselves the second question, What do you want your child’s reason to be? they realize why they feel so dissatisfied with their family’s interactions. Their children are doing what they are told because they are afraid not to, not because they understand either what is important to their parents (and why), or what is important for themselves.

The parents we’ve met in our workshops say they want their children to develop strong inner characters and the skills to make the best choices for themselves—yet none of this can be developed when children act out of fear of blame or punishment. What’s more, when parents use power-over tactics, anger and resentment often build up, even in children who seem to submit easily to parental control. Such anger and resentment may be expressed through self-destructive choices later in life, including extreme rebellion against authority or by relying excessively on the judgments of others.

Sometimes parents see only one alternative to the power-over strategy: to deny their own needs for rest, order, safety, and connection and give in to what their kids want.

Let’s revisit the scene between Jesse and his mother—but this time, with Mom taking a power-with approach.

Mom: It’s time to get ready for bed.

Mom: You’re having a lot of fun playing now, huh?

Jesse: Yeah, and I’m not even tired.

Mom: So you just want to keep playing until you’re tired?

Mom: It must be frustrating to be asked to stop doing something that’s so much fun when you don’t feel tired.

Jesse: I never have time for what I want to do. I just have to come home and do homework.

Mom: Hmm. It sounds like this time between homework and bedtime is really important to you, and you wish it were longer?

Mom: Thanks for helping me understand that. You know, I’d like you to have as much time as you want for the things that interest you. At the same time, I’ve also noticed that when you stay up after nine on school nights, you’re tired the next morning. Do you hear what my concern is?

Jesse: Yeah, you want me to get a good night’s sleep.

Mom: Yes. Thanks for hearing that.

Mom: Okay. I’ll get out your pajamas.

In this dialogue, Mom first chose to connect with her son’s feelings and his needs for play and choice. When Jesse felt heard and realized that his needs mattered to his mom, he opened up to hearing her needs while also standing up for his own. Then he was willing to cooperate.

It’s true that learning and implementing these communication skills, and reaching this kind of mutual understanding, can take time and effort. It is also true that children who are already accustomed to a power-over model often need time to develop trust that parents mean it when they say their child’s needs matter. But these are skills we’ve seen many parents families—and parents tell us they see more trust and cooperation within their family afterwards, which they say justifies all the early energy they invest.

Each time parents come to a workshop in Nonviolent Communication, we all ask ourselves, What do we want for ourselves and for our children? The answers we hear are always the same: kindness, respect, communication, cooperation, and responsibility. From the time they’re young, we can prepare our children for a lifetime of power struggles, arguments, fights, and wars. Or we can help them learn skills to create a world that embraces cooperation and understanding as the only true ways to lasting peace and satisfying, sustainable relationships. When parents use their power with their children, they are subtly teaching them skills and strategies for practicing compassion and cooperation in all areas of their lives.

Im afraid this is the way of life, and as children grow they want to be able to make their own mistakes no matter how hard we try as parents to stop this.