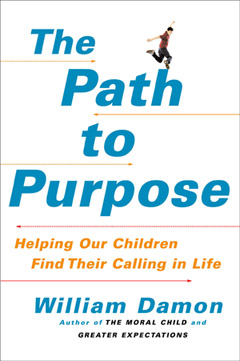 In his latest book on the importance of moral development, William Damon, a professor of education at Stanford University and the director of the Stanford Center on Adolescence, argues that children today—far more than children in the past—are floundering for lack of direction. While society at large focuses on practical concerns like good grades and secure jobs, Damon argues that children want to know how to find true fulfillment. The Path to Purpose looks at how children are hampered in their search for meaning, and how concerned adults can help them find it.

The book’s important message is often lost in dense, academic language, but it still shines through real-world examples. It’s hard not to be encouraged by children such as 12-year-old Ryan Hreljac, who in the past six years has raised enough money to build 319 drinking wells in 14 different countries. Ryan was inspired in first grade after learning that children in Africa were dying for lack of clean water. He raised his first 70 dollars on his own by doing chores around the house. When he learned this wasn’t enough to build a new well, he didn’t get discouraged; instead, he redoubled his efforts by seeking donations from the people around him. With help from his parents, he built a website to further his project.

To be sure, kids like Ryan share an unusual combination of personal traits: optimism grounded in realism, ambition, and humility. But Damon argues that these are qualities we should nurture in every child, not just high achievers such as Ryan. “Their experiences offer lessons that are wholly relevant to all other young people growing up today,” he writes. “Anyone can find a purpose and pursue it with rich benefits to themselves and others.”