Earlier this week, Greater Good published a piece I wrote on research into the role of service to others in addiction recovery, “Staying Sober through Service.”

Maria Pagano, an addiction researcher at Case Western University, has found that alcoholics and drug addicted teens and adults benefit from helping their fellow sufferers—they experience reduced craving, reduced depression, and better overall functioning. In fact, she’s come to the conclusion that helping others may be the most important aspect of AA in its quest to encourage sobriety and recovery from addictions.

Earlier this week, Michael Krasny’s Forum program on KQED highlighted a new organization that is trying to spread a similar message: giving service to others is a great way for individuals to cope with illness. Listen here while you read on:

The organization—Adversity to Advocacy, or A2A, for short—shares stories of patient activism, in which individuals suffering from an illness are using their experience to advocate for others, in order to inspire others to become active and to promote collaborations.

As co-founder of A2A, Jeff Bell, told Krasny, he became interested in turning adversity into advocacy when he saw how helpful it was for him to share his own story about struggling with Obsessive Compulsive Disorder. He wanted to do something to get the word out about this discovery about the healing powers of helping and to inspire others struggling with adversity to get involved. Corey Reich, a young man who suffers from ALS or Lou Gherig’s Disease, also on the show, joined A2A to promote his own efforts to help others with ALS—Corey’s Crusade, a fundraising effort he and his parents started which has already earned nearly $1 million toward research for a cure.

Listening to this program, I couldn’t help but think of my friend, Annette DeBow. About 4 years ago Annette was diagnosed with a rare blood disorder—myeloproliferative neoplasm, a slow growing cancer where the bone marrow produces too many red blood cells. MPN can cause strokes, increased fatigue, and blood clots, and can develop into leukemia, a pretty scary prospect for a young woman who’d just become a mother. After seeking treatment, which involved frequent phlebotomy (blood letting) and chemotherapy to thin the blood, Annette did something else too—she joined a support network of fellow sufferers through an organization called the MPN Research Foundation.

“It was hard taking this illness that was a private thing and putting it out there,” says Annette. “I think illness in our society is just something we don’t talk about.” 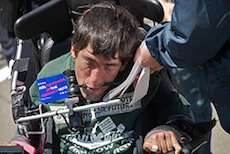 A disability activist signs a police citation at a protest of California health care budget cuts in June 2009. © Steve Rhodes

But Annette did more than just overcome her shyness and seek support. She signed up to do a 200+ mile trek through the Sierras along the John Muir Wilderness trail to raise money for research. That experience of giving was tremendously uplifting, especially when she received supportive messages from people all around the world, including people in Australia and China. And it helped her to cope with the illnesses effects.

“I tend to process things through action, and doing this really helped me to work through my fears and anxieties,” says Annette.

After her hike, her oncologist took her off of her chemotherapy meds for a few months, and she discovered that finding other ways to give helped her to reduce her stress, manage her fears, and make her feel physically healthier. Now every three months she organizes a group to go on a backpacking trip, sharing her love of wilderness with others.

“There’s this psychology of giving—it’s so symbiotic,” says Annette.

More and more, research is supporting Annette’s findings about her own experience and the claims of A2A.

An early pioneer in the science of this effect, David Spiegel of Stanford University, who was also on Krasny’s show, talked about his famous study in which women suffering from metastatic breast cancer were randomly assigned to attend a cancer support group in addition to regular treatment. Results of this study showed that women in the support group not only felt less depressed than the women who were not in the group, they lived on average 9 months longer.

As Spiegel said in the show, there’s something about sharing with others that makes people feel less alone; it helps them to feel that they have some agency in the world and are not just victims of their disease.

It seems clear that helping others in need can have tremendous social, psychological, and even physical benefits for those suffering from debilitating illnesses. And, it’s important to hear stories of individuals finding new meaning and hope in their lives through giving service, as well as see that research supports their efforts. I’m glad that A2A exists, and that we may be seeing more connection between those who study the benefits of giving and those who are out there doing it.

On behalf of all of us at The A2A Alliance, I want to thank you for helping us spread the word about our adversity-to-advocacy mission.  I’d also like to personally invite your readers to become “instant advocates” by leaving a brief Message of Hope via our website:  http://www.a2aalliance.org

The A2A Alliance is proud to be partnering with The GGSC to help showcase the latest research supporting the power of turning adversity into advocacy.