Researchers have spent years—entire careers, even—trying to answer a deceptively simple question: Can we become happier?

Surveys of people who have been through a major life change—both positive and negative—have suggested that we all have our own innate “set point” of happiness. No matter what we experience, the set-point theory goes, we’ll inevitably adapt and return to our genetically determined baseline level of happiness. This would bring drawbacks and benefits: On the one hand, it would mean there’s little we can do to make ourselves happier in the long run; on the other, it would protect us from long-term distress, ensuring that we bounce back from whatever life throws our way. 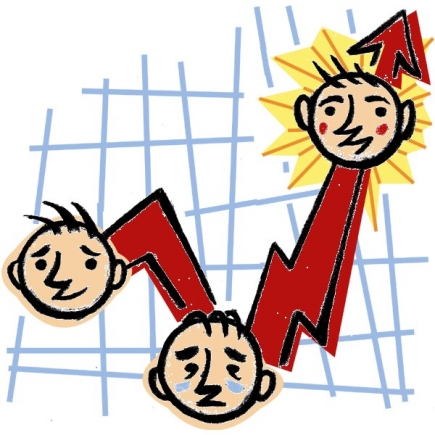 But a new line of research makes a strong challenge to the set-point theory. In studies published earlier this year, Richard Lucas, a psychologist at Michigan State University, reports that he found marked, seemingly permanent shifts in happiness levels among a sample of more than 60,000 people in Germany and the United Kingdom. These people were tracked for between 14 and 21 years, during which time they gave annual assessments of how happy they were. Over the years, many of them experienced significant events in their lives—such as marriage, divorce, the death of a spouse, unemployment, and disability—and Lucas was able to see how happy they said they were in the years before and after these major life events occurred. This set Lucas’s work apart from most previous studies of happiness, which have had to ask participants to recall their happiness levels from years earlier, and which usually relied on a much smaller sample size.

Summarizing his findings in the journal Current Directions in Psychological Science, Lucas shows how happiness levels can and do change in the long run, and that not everyone is able to fully recover from traumatic events. For instance, people reported significantly lower happiness levels after acquiring a severe disability; even seven years later, they showed little to no movement back to their previous levels of happiness, leveling out at a new, much lower set-point. Although people did bounce back slightly in the years following a divorce or becoming a widow, their happiness levels seven years after those events were still below their levels from just a few years before the event.

Although the implications of these findings may seem grim, they do offer some hope, according to Ed Diener, a happiness expert and professor of psychology at the University of Illinois.