A philosopher once wrote to Frans de Waal, explaining the flaw in the primatologist’s findings on what he calls “the emotional side of animal behavior.” 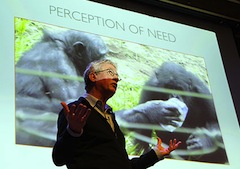 On Monday, in a lively campus appearance hosted by the Greater Good Science Center, de Waal offered compelling evidence that capuchin monkeys—namesakes, though presumably not co-religionists, of an order of Catholic friars—not only recognize inequity, but are quick to challenge it.

Before a packed house at Sibley Auditorium, de Waal played a video of an experiment he’d done with pairs of capuchin monkeys, housed side by side in glass cages. In return for handing a pebble to a researcher, one monkey receives a bland piece of cucumber, which she’s happy to get—until she sees that her partner’s reward for the very same task is a tasty grape.

She gives it another try, but instead of a grape gets cucumber again. This time she hurls the cuke back at the researcher, rattles her cage, pounds the floor in angry protest. It’s a tantrum similar, in fact—as another video showed—to that of a human toddler who sees her older brother get a cookie, only to get half herself.

During de Waal’s experiments, he said, monkeys rewarded equitably rejected the cucumber just 5 percent of the time. If their partners received a grape, however, they refused their lower pay at a rate of 50 percent. And when partners were given a grape “for free,” without even having to pick up a pebble, rejections soared.

Such behavior, said the Dutch-born de Waal, now at Emory University, is further evidence that humans are not the only species to boast a moral code, and that morality is separate from God and religion. Instead, it’s related to what he calls the “prosocial tendencies” of primates and other animals, a self-awareness — and awareness of others — that gives rise to emotional responses like reconciliation, empathy and consolation.

“I’ve seen chimps kill each other,” said de Waal, “so I’m very fully aware of their competitive side.” After studying aggression in chimps as a student in the Netherlands, though, “It struck me that after fights they would come together, they kissed and embraced each other, and that was actually more interesting than the aggression itself.”

And chimps aren’t the only nonhuman animals with a bent for reconciliation. “There’s only one mammal that has been tested where it has not been found, and that’s a mammal many of you have at home,” de Waal said. “It’s a domestic cat.

“I’m a big cat lover,” he added, “and I’m still waiting for the magical moment.”

The feline, he explained, is a “solitary hunter,” and so has less need to work in tandem with partners, as primates and elephants have proved able to do in his and others’ experiments. But he rejects the distinction many people make between humans and other species, “that what animals do must be instinctive, and what we do is cultural.”

He described the difference between two kinds of macaques, rhesus monkeys and stump-tails, and the cultural influence one can have on the other. Rhesus monkeys, he said, are “very hierarchical,” prone to punishing subordinates and not keen on reconciliation. Stump-tailed monkeys, by contrast, are “very tolerant and engaging.”

“I usually compare them as the New Yorkers and the Californians,” he said.

In one experiment, juvenile stump-tailed and rhesus monkeys were housed together for five months — during which the stump-tails’ mellowness rubbed off on their more belligerent cousins.

He cited studies that reveal “big cultural differences” between America and Japan, where children reconcile “much more” than their U.S. counterparts — likely due, according to researchers, to the way teachers in each country handle conflict in class and on the playground.

“Teachers in the U.S., as soon as there’s a fight among kids they step in and stop it,” he said, while in Japan “they let them fight, and reconcile on their own.”

‘The bonobo is an atheist’

During his hourlong talk, followed by questions from the audience, de Waal employed data, humor and videos to break down commonly held beliefs about the differences between human and nonhuman animals. There were chimps showing empathy by unselfishly caring for their partners’ well-being, for example, and a pair of elephants figuring out how to haul in a tricky feeding apparatus by coordinating their efforts.

And while his listeners were rapt throughout, they witnessed plenty of evidence of “yawn contagion,” which, like other manifestations of empathy — human and not — rises and falls in relation to others’ perceived “otherness.”

De Waal, a prolific author whose most recent book is The Bonobo and the Atheist, bristles at the notion that “humans are special,” a conceit, he said, prevalent in the literature of economics and anthropology: “I don’t believe a word of it.”

“The bonobo is an atheist, I think,” he said Monday. “Although maybe the bonobo would be diplomatic and say, ‘I am an agnostic.’

“I’m interested in the evolution of morality,” he explained. “And each time I talk about the evolution of morality people say, well, it comes from God, or it comes from religion. And I’m sort of tired of that. Because I think our current religions are just a couple of thousand years old, and I cannot imagine that 200,000 years ago our ancestors had no rules of right and wrong, or fairness, or whatever. So morality must be much older.”

At the least, he might have added, it predated the French Revolution.