Ten women sit in a circle with crossed legs and alert postures, breathing silently. An instructor offers the kind of periodic reminders you’re likely to hear in many mindfulness classes: “Let what comes up just be there, as it is . . . without any need to resist, struggle, or change it,” or, a few minutes later, “Watch as thoughts, feelings, and body sensations arise and pass away, returning your attention gently to the part of you that is aware of these thoughts, feelings, and sensations.” 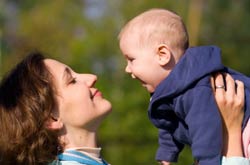 It seems like a typical mindfulness training course—except that a chorus of coos, ahhs, and gurgles fill the room in the quiet moments: The circle surrounds a sea of blankets with 11 wiggling babies, the children of the women in the circle (two are twins). These women are participants in the Mindful Motherhood training, an eight-week mindfulness-oriented stress reduction course that I developed specifically for pregnant women and new moms.

My colleagues and I wondered how it would work to have 10 women bring their babies to class. Would it be a madhouse? Would we be able to do any mindfulness practice at all? In fact, it turned out to be a great opportunity for practicing mindfulness “on-the-job” — during inconsolable baby-crying periods or tough diaper changes—with support. And oddly, during mindfulness periods, the babies seemed to sense the calm, and most often seemed to be baby-meditating right along with us.

While becoming a mother is a source of great joy for most women, recent data suggest that up to 18 percent of pregnant women are depressed during their pregnancy, and as many as 19 percent of first-time mothers may have major or minor depression in the first three months after delivery. Psychological disorders other than depression are also prevalent around the time of birth, with 12 percent of women experiencing mood disorders, 8 percent facing post-traumatic stress disorders, and 7 percent having anxiety disorders. Over and above these mood disorders, 20-25 percent of women experience mild to moderate levels of emotional distress during the first three months after giving birth.

A large body of empirical evidence in both animal and humans studies indicates that stress and mood disturbance experienced during pregnancy increases the risk for preterm birth (which is considered one of the most pressing problem in maternal-child health in the United States) and other pregnancy-related complications, and may adversely affect the developing fetus. There is ample evidence suggesting that mothers’ depressed mood can impair their ability to bond with their infant.

In light of this research, and based on many of our own experiences as parents, our team at California Pacific Medical Center’s Research Institute in San Francisco saw a need for a brief, low-cost, non-pharmaceutical intervention to reduce stress, improve mood, and decrease the effects of stress on mothers and their infants. In response, we developed the Mindful Motherhood program, which combines elements from several different mindfulness-training programs with some new material we developed on our own. 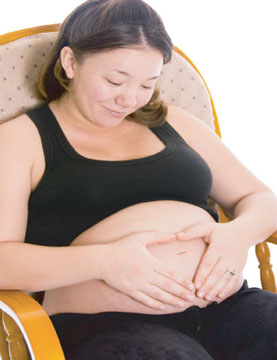 We piloted the program first in a group of ten women, training them in the practice of mindful awareness, mindful movement, and mindfulness in everyday life. After this group ended, we made some changes to the program based on participants’ feedback and our experience as facilitators and researchers and tried it out on another group of women. Finally, we compared two groups of women, one that received the training in pregnancy and one that did not. The women who did not receive the training during pregnancy participated in it when their babies were between three and six months old.

Though small, this pilot study showed that it was possible to learn mindful awareness during pregnancy and early motherhood (even with baby in tow!). The results, published in the Archives of Women’s Mental Health, showed that women who engaged in our mindfulness training during pregnancy had reduced negative emotions and anxiety during pregnancy compared with women who did not participate in the training. There was also evidence of reduced symptoms of depression and increased positive emotion among the program’s participants.

Building on this success, we are now developing a similar program focused on stress reduction and healthy weight gain in pregnant women—part of a large five-year project funded by the National Institutes of Health at the University of California, San Francisco. As part of this MOMS (Maternal Obesity, Metabolism, and Stress) study, pilot tests with pregnant women will begin in the fall of 2010 in San Francisco..

Perhaps the greatest motivation for this new program, and the strongest evidence of the pilot program’s impact, comes from the testimonials we collected from the women who have participated so far.

“For me, the program gave me the freedom to be the kind of mom I wanted to be, instead of just reacting automatically,” reports one participant. “I still have difficult moments, and can get stressed out, but the mindfulness helps me stay centered and stay connected to myself and my baby.”