West Point cadets endure a grueling level of physical exertion, emotional challenge, and social abuse. The standards for completing the training are high, as is the dropout rate.

According to psychologist Angela Duckworth, who has studied these cadets, what sets the graduates apart from those who don’t complete the training isn’t innate talent or intelligence, but grit: a combination of passion and perseverance that helps people transcend difficulty and succeed in attaining their goals.

Duckworth has studied grit for the last 10 years, looking at elite athletes, spelling bee champions, and others who are at the top of their game. She’s developed a grit scale by asking people things like how much they agree with the statement “I have overcome setbacks to conquer an important challenge,” or “I finish whatever I begin.” Then, using this measurement of grit, she’s tried to show that grit predicts tenacity in reaching a goal and resilience in the face of disappointment. 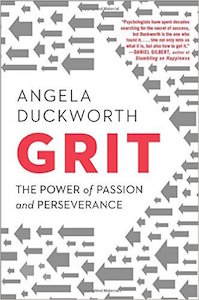 In one study recounted in her book, Grit: The Power of Passion and Perseverance, Duckworth was asked to measure the grit levels of high school juniors from public schools in Chicago. A year later, 12 percent of those students failed to graduate. Analyses showed that those who graduated had scored higher in grit, and their grit score was a more powerful predictor of graduation “than how much students cared about school, how conscientious they were about their studies, and even how safe they felt at school.”

Duckworth believes that research like this shows that grit is critical to success, and being gifted or talented is not necessarily that important. “Our potential is one thing,” she writes. “What we do with it is another.” In study after study, and in interviews with many successful people, she recounts how having a purpose in life, being willing to work hard for it, and having some resilience when faced with setbacks are the keys to success.

In many ways, her message is a positive one, and her book is a fun read. We hear the voices of many who’ve succeeded in life and see how their stories illustrate her points. Her thesis also dovetails nicely with Carol Dweck’s, whose research has shown that children succeed when encouraged to have a growth mindset over a fixed mindset. In other words, effort matters.

Still, some of the science recounted in the book seems thin, particularly given how few populations have been studied. Even more problematic, other ingredients for success are given short shrift.

For example, just after Duckworth outlines her formula for how one gets from talent to achievement—which involves effort at both ends—she mentions the role of social or environmental factors in success, too…but only in passing.

“Of course, your opportunities—for example, having a great coach or teacher—matter tremendously, too, and maybe more than anything about the individual,” she writes. But “my theory doesn’t address these outside forces, nor does it include luck.”

This is an important admission; but Duckworth leaves it unexamined. Instead, she plows on with her thesis, as if social supports like these are secondary, when some research has shown they are anything but.

And, there are other important points that get little attention. For example, in talking with a swimming coach, Duckworth is told that “the most accomplished swimmers almost invariably had parents who were interested in the sport and earned enough money to pay for coaching, travel to swim meets, and not the least important: access to a pool.” In other words, it took money and parents who were available to their kids to develop the elite athletes whose grit she applauds.

The book left me scratching my head at points. Does having grit really precede success or does success breed grit? How much of grit is just situation-dependent and not really a character trait? What are the impacts of things like inadequate schools, violent neighborhoods, poverty, or lackadaisical parenting on grit? To her credit, Duckworth admits that the research is still in its infancy, which is a plus. But when she makes recommendations to parents and schools anyway, it’s less so.

Interestingly, some recent research—no doubt published after the book was written—has found little to no connection between grit and academic success, which should give teachers and parents pause. Yet, Duckworth’s research has led to a growing movement to require grit testing in schools, as if the research on grit were sound and definitive. This makes some educators worry that grit is being used to blame kids for their failures—especially at-risk students—taking attention away from systemic problems in our educational system. Besides, it’s not yet clear that, even if grit were helpful, it can be taught.

While grit may indeed be a good thing, we do a disservice to students if we suggest it’s the number one thing they need to succeed. Instead of championing grit, perhaps Duckworth should consider more the role environmental factors play in student achievement. Providing students with exciting and challenging academic opportunities, teachers and mentors who are mindful and supportive, and schools where they feel safe to develop cognitive and emotional skills have all been shown to improve academic performance. It seems much more likely that pursuing these fixes will lead to better outcomes than trying to make students persevere without those supports.

So, before we start issuing grit exams, we may just need to take a deep breath and back off…at least until the science catches up. Perhaps doing that would give us time to reconsider something else: the legitimacy of our goals. It may be that, with more forethought, we decide that looking for ways to help West Point cadets better endure their abusive training is less important than transforming the training program to be less abusive.