Many of us could probably close our eyes or plug our ears and get a rudimentary sense of what it might be like to lose our sight or hearing. 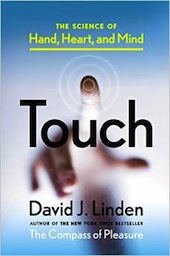 But it’s impossible to imagine what life would be like without a sense of touch, writes David Linden, in his new book Touch: The Science of Hand, Heart, and Mind. In his book, the Johns Hopkins neuroscientist leads us on a delightful tour of the science of touch, sharing discoveries that shed new light on this highly under-appreciated sense.

If you’ve ever wondered why we call emotions “feelings” and not “sightings” or “sounds,” you may have already guessed that there is a direct correlation between touch and emotions. Certainly, touch can signal connection between people and engender warm feelings and trust—for example, newborns require a mother’s touch to thrive, and romantic relationships are cemented via touch. But research has also shown that different sensations of touch can affect our social interpretations of the people around us in fascinating ways.

In one study, researchers at the University of Colorado and Yale had an employee of the experimenters (blind to the study’s purpose) accompany participants to a designated testing room on an elevator. While riding up, the employee asked participants to temporarily hold a coffee cup, which held either warm or iced coffee, while the employee filled out some basic forms.

After arriving upstairs, participants were then asked to rate a fictional person on ten traits, including things like honest vs. dishonest, humane vs. ruthless, and so on. Those who’d held the warm cup tended to rate the target person as “warmer”—more humane, trustworthy, and friendly—than those who held the iced coffee. In other words, physical warmth produced “interpersonal warmth” in these participants.

Touch also communicates emotions directly. In one study, Dacher Keltner and his colleagues separated two participants using a curtain, and then asked one participant to communicate a variety of emotions by touching only the arm of the other participant, who then tried to identify the emotion being conveyed. Surprisingly, many emotions were correctly identified by touch alone, suggesting that there is a strong link between emotional communication and touch.

Linden’s book is full of interesting tidbits about the neuroscience of how touch works. We learn that most of our skin is covered in hair, even the parts we may think of as “hairless,” and that hair movement conveys important messages to our brains. We learn about the different sensors of the skin that can detect small and large surface changes or vibrations, helping us to do everything from read Braille to drive a car over rough roads. And we learn about the importance of C-tactile fibers and how they interact with brain regions to allow us to experience the pleasure of a caress—a caress that needs to be at just the optimal speed to be appreciated.

Connections between our emotions and physical sensations are also made clearer, such as when Linden explains why a soldier shot in battle may experience less pain in the moment than a child getting a vaccination—distraction versus anxiety. Our brains can either ramp up or ramp down pain signals it receives via the spinal cord, influencing how much pain we will feel in different circumstances.

“The truly amazing fact is that the brain is exerting control over the information it receives,” writes Linden. “The brain actively and subconsciously suppresses or enhances pain information on a moment-to-moment basis.” Interestingly, since anxiety can enhance pain perception, medications that reduce anxiety can be used in pain management.

Another interesting finding is that there is a direct link between emotional pain and physical pain—they both light up similar neural networks in the brain—so that taking Tylenol, which is usually used for physical pain, can also reduce the social “pain” of rejection.

Though some of the book gets very technical—to a neuroscientist’s delight; maybe less so for the lay reader—it’s fun to see how much the science can tell us about our experiences. Though the research is still growing, the take home message is that touch is essential to human existence.

“Interpersonal touch not only has a special role in early human development but continues to be crucial across the span of human social life, promoting trust and cooperation and thereby deeply influencing our perceptions of others,” writes Linden.

And, unlike sight or hearing, there’s no way we could do without it.