We function throughout the day thanks to habits that are nearly automatic: wake up, brush teeth, make coffee. Transforming behaviors into habits saves our brains from having to exert extra effort to make decisions, and this can work to our benefit: Olympic swimmer Michael Phelps broke world records by fine-tuning his habits, for example.

But what about those other habits—like smoking cigarettes, stress-eating, or constantly checking our social media—that may be holding us back?

In his new book, The Craving Mind, psychiatrist and Yale School of Medicine psychology professor Judson Brewer makes a case that mindfulness and meditation can help you identify and counter everyday cravings that lead to recalcitrant bad habits, and even addictions. Brewer, also director of research at the Center for Mindfulness in the University of Massachusetts Medical School, guides us through various addictions (to cigarettes, technology, distraction, and even love) and explains how we can hack our brains to break them.

Our habits and addictions 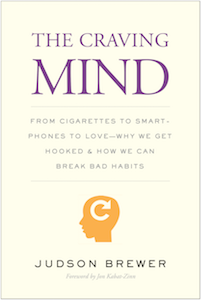 The Craving Mind: From Cigarettes to Smartphones to Love—Why We Get Hooked and How We Can Break Bad Habits (Yale University Press, 2017, 256 pages)

Habits can be described as automatic behavioral loops, involving triggers, behaviors, and rewards. For example, one may feel stressed (trigger), eat junk food or smoke a cigarette (behavior), and feel better (reward). When you attain (and, later, anticipate) the reward, your brain releases dopamine in a neural process that lays down a memory of that behavior and helps you “learn” to execute that behavior next time to attain the reward. This process is called reward-based learning.

In everyday life, Brewer explains that reward-based learning can reinforce a diverse array of inconvenient habits. Doctors may learn to respond to patients’ suffering in a self-protective way by emotionally distancing themselves (which erodes patient care). We can get in the habit of ruminating, constantly checking our phone notifications, and distracting ourselves, to the point that these behaviors become addictive. With tobacco use and unhealthy eating habits as leading causes of preventable death worldwide, and the rise in accidents due to texting while driving, habits can be dangerous.

Addiction is defined as “continued use, despite adverse consequences” (which, in the context of this book, doesn’t include more serious substance use disorders). How is it that even when someone is fully cognizant of how harmful their habits are, they continue to act on them? Brewer explains that reward-based learning is the very powerful mechanism that forms and reinforces habits. When we have an uncontrolled relationship with our habits, we can experience inadvertent cravings for reward and become blind to how these habits are hurting us over time.

Though the study of addictive behavior emerged in Western psychology in the 19th century, it has in fact been observed for thousands of years. Brewer and his colleagues have mapped reward-based learning onto the Buddhist concept of “dependent origination,” which describes the nature of craving and how it leads to continued suffering. Since Buddhist tradition teaches mindfulness to help people understand craving and suffering, Brewer suggests that mindfulness may also help free us from our modern bad habits.

How can mindfulness help?

Brewer touts the mindfulness skills of curiosity and attentiveness as key to tackling bad habits. Being more mindful can help you clearly see the outcomes of your behaviors and assess whether the behaviors are helping or harming you. Being aware of the outcomes can help you recognize your blind spots and realize how they are perpetuating the same harmful habits. Once you are no longer caught up in your cravings, you may begin to direct your behavior toward more helpful rewards.

In a randomized clinical trial, Brewer showed that a mindfulness-based program helped smokers quit at twice the rate of the gold standard “Freedom From Smoking” program from the American Lung Association. In the mindfulness program, smokers were taught formal and informal practices, including breath awareness, loving-kindness, and attention to habit triggers and actions. Smokers reported being more aware of why they smoked, what behaviors they might substitute for smoking, and how disgusting cigarette smoke actually smelled and tasted.

The study also found that among all informal practices, the one associated with the greatest reductions in smoking was RAIN, in which people are encouraged to:

Practicing RAIN helped smokers to approach their smoking as observers, distancing them from their habit in a way that allowed them to become disenchanted and eventually quit—a strategy that may help in conjunction with medication-based treatment plans.

Brewer also advises against brute-forcing habit change. Instead, when faced with a craving for the old reward, be curious about how you feel and why you feel that way. Being too concerned about overcoming the habit and too emotionally invested in progress and relapses could hinder true attentiveness, he explains. Being in the moment and watching things unfold are more impactful than trying to coerce oneself into quitting.

When you do this, Brewer says, one of the things you might start to recognize is the difference between excitement and joy as rewards. Joy is open and arises from being curious and attentive, while excitement—like how you feel after excessive online shopping—is more restless and leaves an urge for more. Uncovering the subtler pleasures of joy versus excitement through mindfulness can help you choose the path to joy more often (and, with it, good habits).

In many of his neuroimaging studies, Brewer hones in on one region of the brain: the posterior cingulate cortex (PCC), which typically activates during self-referential brain activity such as craving. His work shows that mental states such as meditation, concentration, joy, and wonder are associated with decreased PCC activity, lending compelling evidence that mindfulness may help unshackle the mind from out-of-control habits.

Given that many health concerns are fueled by habits and addictions—and certain racial, socioeconomic, and other demographic groups disproportionately face these health concerns—it’s critical to find better solutions that help people change their behavior. Although Brewer’s book gives us a compelling argument that mindfulness is a helpful practice that may be palatable to a wide range of people, some barriers still exist for certain groups. Nonetheless, his work has led to the creation of two mindfulness smartphone applications, Craving to Quit and Eat Right Now, that help people take control of and overcome their smoking and eating habits and may make mindfulness practice more widely accessible.

And, for those of us who may not have serious addictions but simply can’t put away our cell phones, his book gives us yet another reason to practice mindfulness.