Leslie came to the first class of my course on self-compassion for teens with a definitive chip on her shoulder. She refused to sit with the group, standing on the perimeter with arms defiantly crossed and eyes narrowed. There was no doubt of the message she was conveying: “Don’t you dare try to make me participate in this class.”

I didn’t. I knew better. 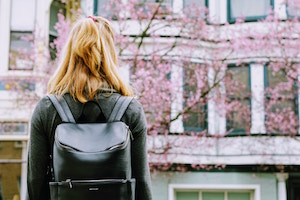 During a self-compassion meditation, I sensed Leslie shifting uncomfortably in her seat. She breathed heavily from time to time. But when the meditation ended, her face had changed; the anger and resistance had dissolved and tears were rolling down her cheeks. Through her sobs, Leslie explained that she didn’t want to be here, that all her friends were together at a football game and her mom made her come to this class. We breathed with her during her story and welcomed her tidal wave of emotions. In the course, we always allow emotions to be present, no matter how overwhelming, in an effort to help teens learn how to deal with them.

The class ended. Leslie bolted out, ran down the hall, and was gone. All week I wondered if she would be back for the next session.

The class I was teaching was called Making Friends with Yourself: A Mindful Self-Compassion Program for Teens (MFY). It focuses on the specific skills of how to be kinder to yourself—as pioneering self-compassion researcher Kristin Neff puts it, treating yourself as you would a good friend who was struggling. Sad to say, almost 80 percent of us treat others with more compassion and kindness than we offer to ourselves. When our friends have a bad day, we support them in every way we know how; when we’re having a bad day or fail at something, we generally beat ourselves up with self-criticism.

And teens? They beat themselves up even more. As their cognitive capabilities become enhanced in early adolescence, teens become more self-aware and, subsequently, more self-conscious. Psychologist David Elkind calls this phenomenon “the imaginary audience,” because teens often believe that others are as attentive and aware of them as they are of themselves. This microscopic examination generally breeds harsh self-criticism, so the need for self-compassion among teens is paramount.

At a time when depression and suicide rates are high, more and more research is starting to show how crucial self-compassion can be to teen mental health. Having taught self-compassion to teens for a number of years, I’ve seen the benefits firsthand—and learned some lessons about how to get the message across.

How we teach self-compassion to teens

Making Friends with Yourself is an eight-week course created by UC San Diego’s Lorraine Hobbs and myself, as an adaptation of the adult Mindful Self-Compassion course by Kristin Neff and Chris Germer. Classes include developmentally appropriate exercises such as mindful art and movement, music meditation, and short videos on topics like the changing adolescent brain. MFY teaches teens how to let go of pervasive self-criticism and judgment, be kind to themselves, and begin on the path of accepting themselves exactly as they are.

Our teachings at these classes follow the three components of self-compassion:

Common humanity. Teens come to understand that they are not alone. That what they are experiencing—feelings of insecurity, exclusion, or sadness, for example—is common to all teens (even though it may not seem that way). That there are actually biological reasons—changes happening in the brain—that make them feel the way they do. Teens learn that it isn’t their fault, and there’s nothing wrong with them.

Mindfulness. When teens feel as if they’re about to burst from all the emotions mounting up inside, we teach them to bring attention to their feet, and just notice what the bottoms of their feet feel like. As their mind wanders, we guide them to bring their attention back.

Self-kindness. We invite teens to put their hands over their heart, stroke their cheek, or give themselves a hug, which actually can elicit certain hormones—oxytocin and opiates—that make them feel better. We remind them that what they are going through right now is hard—that, by definition, being a teen means dealing with a lot. We encourage them to take a moment to say some kind words or do something nice for themselves.

Most of all, the goal of MFY is to let teens know that these years don’t have to be as painful as they sometimes are, that there is a way out of their pain, and that there are things they can do to better cope in the moment. They can become more resilient.

As research on the program continues to grow, we are hoping to bring MFY to teens who are particularly in need—the ones most at risk for depression, eating disorders, gender dysphoria, and suicide.

In pilot studies, teens who have taken MFY have shown improvements in mental health after the class compared to when they started. In particular, teens who become more mindful also become less depressed, less stressed, and less anxious. Teens who grow in self-compassion also become less depressed and stressed, as well as more resilient and better able to embrace new experiences.

Through a study funded by the National Institutes of Health, the University of North Carolina, Chapel Hill, Program on Integrative Medicine is currently investigating whether MFY can prevent depression in teens who are showing some initial signs of depression. In August, Lorraine Hobbs and I were invited to lead a two-day MFY workshop for educators, community leaders, and teens in Port Townsend, Washington, where 15-year-old Benji Kenworthy died by suicide in 2015. Earlier that summer, Lorraine and I traveled to the Arctic in northern Quebec to teach the adult Mindful Self-Compassion course to Inuit teachers so they could eventually teach MFY to the region’s teens, whose suicide rate is 11 times the national average.

Back at the second week of my course, Leslie showed up. And she returned the next week, and the next. Her face was no longer strained, but softened. She contributed to our class discussions and became an integral part of our group. After the last class, she shared that she really enjoyed MFY, and was sorry that she was so irritable that first day. Eight months later, her mother emailed me to see if there was some way to bring MFY into the middle school where she worked as a teacher. All teens need this class, she expressed.

It seems that when you take the time to be kind to yourself, you realize that you do deserve this kindness, you are valued and valuable, you have a unique role on this planet, and you deserve to do well. You believe in yourself. And what greater gift can we give to our teens?