Adolescence is a stressful time in life. Teens have to navigate increased independence from their parents, new and more complicated peer relationships, and more demanding academics, all while managing radical changes in their brains and bodies. Not only that, the current COVID-19 pandemic has created additional hardships for them. 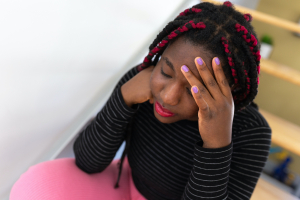 No wonder they may be more vulnerable to anxiety and depression! If teens don’t know how to deal with these stressors in effective ways, they are bound to be at risk for suffering psychologically.

That’s where Katie McLaughlin’s research comes in. McLaughlin, a research psychologist at Harvard University, is conducting studies with teens to find out what’s happening in their brains, bodies, and behavior in response to stressful events. By finding the connection between stressors and poorer mental health, she hopes to provide guidance for parents and teens on how to manage the challenges of adolescence.

“If we understand the pathway through which negative, stressful environments come to increase risk for mental health problems in children, it will help us develop more effective interventions,” she says.

Why stressful events can lead to problems

There is a large body of research pointing out that stressful events are a risk factor for teen mental health issues. The question McLaughlin is trying to answer is why some teens seem to be able to cope better and do not develop serious mental illness.

To learn more, she and her colleagues intensively monitored the lives of 30 girls in Seattle between the ages of 15 and 17 over a year (before the pandemic). They collected frequent reports from the teens about stressors in their lives and whether they were feeling any symptoms of depression or anxiety—in some cases, using cell phone prompts to capture “in the moment” experiences; in other cases, using monthly interviews to measure anxiety and depressive disorders.

In addition, the teen girls wore wrist monitors throughout the study that passively gathered information about their sleep patterns and cell phone activity (phone calls, not internet or social media use). And, at the beginning of the study, they took a test to see how well they could differentiate between their emotions—for example, if they knew they were feeling joy versus excitement or anger versus frustration (a skill that has been tied to better mental health, but can be low in teens).

Then, the researchers ran a series of analyses to see what happened to the girls as they lived their lives, going through ups and downs and facing various stressors, such as breaking up with a romantic partner or flunking a test. Their findings showed that when girls experienced stressful events, they tended to experience more anxiety soon afterward and, later on, more depression.

“Unsurprisingly, we saw increased levels of anxiety on months when the girls experienced more stress than was typical for them, but not depression symptoms—at least not right away,” says McLaughlin. “There was about a one-month lag, so that increases in stress predicted increases in symptoms of depression the following month but not in that same month.”

This is an important discovery, as it suggests a period of time when teens might be able to ward off depression after experiencing stressful events. While other studies on teen stress and depression have found a connection between them, those studies tend to compare large groups of teens (with and without huge stressors in their lives) to each other without providing much nuance. McLaughlin’s study shows what’s happening at an individual level—a valuable contribution to the science of youth mental health.

“We were actually seeing stress unfold in real time within these girls and learning how stress changes emotion processing and even brain development in ways that may impact health,” she says.

One of the things McLaughlin and her colleagues found was that when girls experienced more stress in their lives, their sleep was more disrupted—for example, they might have eight hours of sleep one night, but only four the next. This, in turn, was linked to greater anxiety and depression, which is important to note, says McLaughlin. Disrupted sleep is associated with many psychological disorders and could be good to target.

“What’s interesting about our sleep findings is that interventions designed to improve sleep quality, although not simple, are in some ways simpler and less time-consuming than cognitive behavioral therapy and other evidence-based approaches for depression and anxiety,” says McLaughlin. “For anxiety prevention in teens, you might want to think about a sleep hygiene intervention, which can be brief and easier to disseminate to larger groups of teenagers.”

McLaughlin also found that cell phone use went up during stressful times, and that seemed tied to poorer mental health, too. But, since she doesn’t have a lot of information about the nature of the calls, it’s hard to know why extra phone time was problematic. It’s possible the girls, when stressed, reached out to friends for support and sympathy without the friends offering anything helpful. “Sometimes, offering sympathy without also offering perspective on solving the problem can make things worse,” says McLaughlin.

“If you call your friend to talk, and the two of you just spend a lot of time rehashing what happened and how bad it was without moving into effective problem-solving, it can actually increase the risk for anxiety and depression,” McLaughlin adds.

How understanding their emotions may be protective for teens

Interestingly, the girls who were better at differentiating their emotions at the beginning of the study were better protected from developing depression or anxiety in the face of stressors. Apparently, that finer-grained self-understanding may be helpful for managing stress, perhaps by helping the girls identify better coping strategies, says McLaughlin. That’s a good thing, as emotion-differentiation can be improved through training and even mindfulness practices, which could be another potential skill worth developing in teens.

“Learning to identify feelings and differentiate them is a component of cognitive behavioral interventions for anxiety and depression, but it’s just one element amongst many,” she says. “So, focusing on teaching emotion labeling and emotion understanding is a really interesting possibility for helping prevent depression and anxiety.”

While her findings are preliminary, they do suggest things parents might do to help their teens cope better with stressors—including the pandemic. For example, parents can encourage teens to develop better sleep hygiene by creating regular sleeping schedules, have rules about turning off electronic devices long before bedtime, keep phones out of their bedroom, and avoid caffeine late in the day—all to help with sleep or avoid phone overuse. It helps if the whole family adheres to the rules, adds McLaughlin, so that teens learn sleep hygiene and limited cell phone use is important for everyone’s health.

Meanwhile, McLaughlin continues to expand her understanding of the connection between stressful events and teen mental health. Currently, she’s conducting a similar study but with 200 teen participants (instead of 30), including boys and girls. Her hope is that her work will uncover ways to protect the mental health of adolescents as they go through their tumultuous teen years—and the current pandemic.

“Given the dramatic increases in stress that we have all experienced during the pandemic, developing new intervention approaches that are effective and widely accessible is critically needed,” says McLaughlin. “We are thrilled to be making progress.”