When you’ve harmed another person, a sincere apology can go a long way toward helping them to forgive you and move on. Science suggests that acknowledging wrongdoing and promising to make amends can help relationships recover from past hurts. 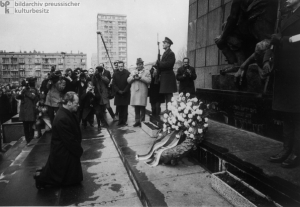 Former Chancellor of Germany Willy Brandt kneels before the Holocaust Memorial in 1970. © German History in Documents and Images

What about when the harm has been done between large groups of people, rather than individuals? In the wake of a war or centuries of systematic discrimination, mere apologies may never seem like enough.

For one thing, it’s hard to trust the “other side” has good intentions, especially when harm has been great, many individuals are involved, and degrees of remorse are unclear. Also, intergroup apologies are traditionally offered by representatives (like presidents or CEOs) rather than actual perpetrators, and are often highly scripted and rehearsed. That can lead victims to dismiss the apologies as fake and insincere, impeding conflict resolution.

The researchers used as raw material a real-world example: a written apology issued by the Irish Republican Army (IRA) for their role in civilian deaths during “The Troubles” in Northern Ireland. However, they manipulated its content to see how that affected the willingness of British citizens to forgive.

In some experiments, the researchers added a concluding paragraph that conveyed the IRA’s recognition of issues needing attention to promote peace. In particular, the amended apology addressed structural issues (like power imbalances, the need for reparations), relational issues (rebuilding lost trust), and issues related to group identity (respect for group status and countering discrimination).

In other cases, the apologies were changed to include expressions of remorse, shame, or guilt. And sometimes the factors and emotional expressions were combined in different ways to see how they might augment each other to increase forgiveness.

After reading a version of the apology, participants reported on how sincere, remorseful, trustworthy, and believable the perpetrator appeared to them. They also said whether they thought the perpetrator should be forgiven, answering with a simple yes or no. Finally, they were asked if they agreed with statements like, “It is important that the wrongs done to us are never forgotten” or “Britain and Northern Ireland will never move on until the events are forgiven.”

Analyzing the results, the researchers found some interesting patterns. For one, when apologies included not just reparations, but acknowledgement of relational and group identity issues, those apologies led people to see the IRA as more trustworthy and sincere. This more favorable perception of the IRA, in turn, led people to be more willing to consider forgiving the group for past wrongs.

According to study coauthor Anthony Manstead, these findings suggest that apologies could be more effective if they considered victims’ needs more carefully.

In yet another experiment, structural, relational, and group-identity issues were added to the apology separately, but that didn’t produce the same results. For example, offering reparations alone did not make people trust the IRA more or want to forgive them, which suggests that reparations, though helpful, are not enough to move peace forward.

“Putting these all together seems to add to a more effective apology package,” says Manstead.

He and Nunney also found that when apologies included messages acknowledging shame, people were more willing to trust and believe the apologies—and to forgive. Even though past research has shown that guilt or remorse is important in peace processes, Manstead didn’t find that in this study.

“Shame is a more potent emotion,” he says. “If you’re expressing collective shame, you’re acknowledging that your group has some bad elements, which appears costly to you and makes you seem more sincere to others.”

Unfortunately, in the real world, many people don’t consider these social-emotional elements, says Manstead. He points to men accused of sexual misconduct in the United States as an example, saying that much of the time, they only reluctantly admit shame. In fact, apologies for misconduct often have to be extracted from them under duress, which makes it difficult for victims to believe the perpetrator is truly remorseful and willing to make amends.

What makes an apology work

On the other hand, he says, you can look to the actions of former Chancellor of Germany, Willy Brandt, who dropped to his knees before the Holocaust Memorial in 1970. The spontaneous acknowledgement of shame and remorse had a much deeper impact on people than scripted apologies.

“That was deeply moving for the people who witnessed it,” says Manstead. “It was a very effective way of getting across the sincerity of the apology that he was trying to make for his country’s actions.”

Of course, it’s not easy to create peace between groups, and a spontaneous display of shame may not be enough. In fact, as this study found, it’s best to include both shame and acknowledgement of impediments to peace if you really want to reconcile with victims of group harm. And though the results of this study align with past research on effective apologies, there is much more work to be done before assuming that an inclusive apology will work as well in a high-stakes peace process.

Still, seeing that the way we approach group apologies can make a difference gives hope for reconciliation. Perhaps if groups involved in conflicts could acknowledge the many levels of harm they’ve caused victims, express shame, and promise to work toward reparations, it could pave the way toward more peace between groups in the future.

“An intergroup apology without these factors runs the risk of being seen as insincere and untrustworthy, and is therefore likely to be brushed off or ignored or seen as ineffective by the victim group,” says Manstead. “I’m not a policy person, but I think that this is a key message to take away from our research.”