When we see someone being kind or generous, it gives us a warm glow feeling inside. Researchers call this “moral elevation,” and it not only feels good but inspires us to want to do good ourselves. 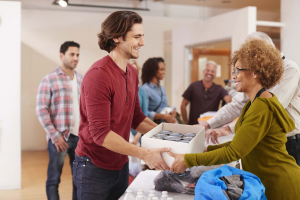 But how much does witnessing good affect us—and why? A new analysis of decades of research aimed to find out the answers. The results suggest that our acts of kindness and generosity, online or offline, can have meaningful ripple effects in our communities.

Researchers synthesized results from 88 experimental studies involving over 25,000 participants to measure how much our own altruism increases after witnessing someone acting “prosocially”—for example, comforting someone who is crying, donating to charity, or acting cooperatively in a competitive game. In the studies, people would read about or see someone act in a kind and helpful way, and then have the opportunity to be kind and generous themselves.

The researchers also wanted to understand the reasons why witnessing goodness inspires people and to identify the factors that increase or decrease their response.

Their analysis showed a moderately strong effect, where people witnessing altruism tended to follow suit themselves. That means that when people model kind and helpful behavior, it has a healthy impact on spreading goodness in a community.
“People resonate when they watch someone do something good,” says the study’s lead researcher, Haesung Jung. “The message that these prosocial behaviors are quite contagious is a really important message that people should know.”

To understand why this kind of modeling inspires people to help others, Jung and her colleagues considered several possible reasons. As an example, they examined whether people in the experiments may have simply been feeling pressured to “look good” by being more giving. But they found this didn’t seem to matter, as people often gave in ways they assumed would be anonymous.

The researchers also considered whether people were just copying behaviors they’d seen someone else doing. But they found that witnesses of kindness often helped in ways that did not match what they’d observed. For example, participants might have witnessed a person giving aid to someone who’d fallen on the street and end up donating more to charity when given the opportunity to pay it forward.

“There may be different reasons why people imitate others’ prosocial behavior, but we show that it’s not really about mimicry,” she says. “Instead, they seem to take on the prosocial goal and generalize it to other people and to different forms of generosity.”

In other words, people resonate with the underlying reason for doing good and become motivated themselves to spread the goodness. This suggests people are prosocial by nature, waiting for inspiration to act.

Interestingly, her analyses showed that it didn’t seem to matter how people witnessed a kind act. They could have read about it, watched a TV show where characters acted altruistically, or actually been present when someone helped another person. The effect was the same: They would act more generously themselves afterward.

Other factors also didn’t matter—like the age of the witness and whether or not they saw someone giving material help (like money) or non-material help (like comfort). This means that so many things we observe, not just the actions of the people around us but things we see in the media or online, may be subtly influencing our behavior.

But there were some factors that did affect how inspired people were to pay it forward. The more time that had passed since people witnessed an altruistic act, the lower their impetus to give.

In addition, women were more likely to want to “pay it forward” than men. Jung was not too surprised by that, as prior research had shown that women were more responsive to kindness modeling and that they tended to “prioritize relating to others and getting along with them.”

Finally, it mattered what kind of response to the kindness people observed. If witnesses saw kind people being praised or even rewarded with money, they were more likely to pay kindness forward themselves. Jung suggests that this can be useful to know if we want altruism to spread.

“It shows we need a social environment where prosocial behavior is positively reinforced in order for people to imitate that behavior more,” she says.

Her research has important implications for society—particularly now, when we need people to act in more prosocial ways by wearing masks and keeping physically distant to prevent the spread of COVID-19. If we use the power of modeling, says Jung, we can build a social norm of collaboration, cooperation, and generosity that will help us solve bigger social problems, including the pandemic and maybe even climate change.