When Jen Park was an adolescent growing up in Korea, she was the oldest child in a family with two working parents. She remembers taking on responsibilities that made her feel older than her peers. 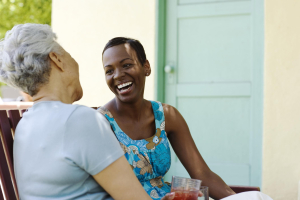 “I learned to grow up at an early age,” Park explains. “When I was 14, I’d pick my younger brother up from school,” Park says. “I’d be in charge of checking his homework and making sure that he was fed until our parents got home. I’d make ramen for him.”

That early experience is one of the things that led Park, a Stanford Graduate School of Business student working toward a Ph.D. in marketing, to become intrigued with how people’s perception of their own age can influence their actions.

“I wanted to test whether subjective age could influence people’s decisions to help others,” explains Park, whose research focuses on judgment and decision-making.

That curiosity led her to team up with Szu-chi Huang, an associate professor of marketing at Stanford Graduate School of Business, on a series of experiments in which they shifted participants’ perception of their own age in order to study the effects on their willingness to help strangers in need. Boston University assistant professor of marketing Daniella Kupor and Google researcher Bella Rozenkrants, also worked on the project.

The research, described in a recent article in the Journal of Consumer Psychology, found that even in a culture obsessed with youthfulness, feeling older than one’s years actually may provide a vital benefit by promoting the sort of prosocial behavior needed to cope with big problems such as poverty and disaster relief.

More than just a number

The effect of subjective age upon the social good is a phenomenon that seems deeply intertwined with society’s conflicted attitudes about aging.

On one level, “we do not like getting old,” Huang notes. “Look at the amount of money that we spend on anti-aging creams and other products that are part of a multibillion-dollar industry devoted to keeping you young.”

Even as American culture ostensibly preaches respect for the elderly, older people often are perceived as less physically and intellectually competent. “There are many negative stereotypes of aging in our society,” Park says. “In Western societies, aging typically is associated with decline and illness. But aging is not as stigmatizing in other parts of the world. So we asked ourselves, what are the unknown benefits of older age that we can leverage for the greater good?”

But being old and feeling old aren’t the same thing, Park and Huang explain. Perception of one’s age isn’t necessarily based upon your date of birth; instead, it tends to be fluid, varying from situation to situation and influenced by the actual age of the people around you.

“Social comparison can really shift how old you feel,” Huang explains. “If I interact with students who are young millennials, I feel older, which is a contrast to how I feel interacting with senior colleagues.”

Additionally, subjective age even can be influenced by a person’s memories or thoughts about the future. “If you’re thinking about yourself back in college, when you could party for three days straight, you feel older,” Huang says. “But if you think ahead and imagine your retirement, you might feel younger by comparison.”

To gain insights about subjective age, the researchers ran experiments with participants between the ages of 18 and 60, both in the lab and in the field. “We shifted people’s subjective age, by making them feel younger or older,” Park explains. To utilize that effect, the researchers used techniques such as showing participants pictures of infants and elderly people and asking them to imagine interacting with them.

But Park and Huang also found that they could alter participants’ perception of age by getting them to compare themselves to their memory of being 15 years old, or to how they envisioned their 80-year-old selves.

“It’s not just a social comparison that makes one feel older or younger,” Park says. “We found that you can feel older by imagining yourself at a younger age,” or vice versa.

“We wanted to make sure that we could shift their perception of subjective age,” Huang explains. “Once we figured out that we could, we wanted to see what effect it had upon prosociality.”

In subsequent experiments, the researchers studied the effect of subjective age upon participants’ willingness to help strangers—for example, by donating money to a nonprofit organization that promotes skin cancer prevention or provides guide dogs to people who are blind, or by volunteering time to help build public parks and trails.

In one field study, researchers set up a stand at a Stanford sports event, just before Thanksgiving, and invited spectators to write thank-you cards to either family members or university staff members. In the process, the researchers shifted participants’ subjective age by informing them about the average age of others who had participated in the card-writing event. In another, they organized a food-bank donation drive at local farmers’ markets. In some instances, they used teenage volunteers to collect the money, a ploy to make participants feel older. In other instances, the volunteers were in their 50s, so that many of the donors might feel younger.

Across these studies, the researchers found that when participants perceived themselves as older, they were more willing to do things for others with whom they didn’t have a personal connection, whether it was making donations, writing thank-you notes to strangers, or volunteering time for projects that would benefit people they’d never met.

“People are more likely to donate and volunteer if they feel older,” Park notes. In the card-writing experiment, for example, “we found that when we told participants that the average age of other card-writers was 19, they felt older and wrote more notes to staff.”

“We also found that when people are nudged to feel older, they feel more responsibility,” Huang says. “It’s like the society is on our shoulders. We feel like we’re expected to make this world better for the next generation.”

Organizations involved in social causes might utilize the new insights about subjective age to optimize their recruiting and fundraising efforts. “If you want to create an older subjective age among the audience you’re trying to reach, utilizing younger volunteers for recruiting might help,” Huang says.

Subjective age might also be utilized to shape advertising and marketing of socially responsible and environmentally sustainable products, according to Park.

“I’ve also been thinking about how we can use this knowledge to encourage people to have more responsible behavior in the pandemic, such as wearing a mask and getting vaccinated,” Park adds. “We live in a time when people need to show responsibility more than ever.”

The findings also provide pushback against the misconception that older people no longer play a pivotal role in society. “We want to fight against the stereotype that being older makes you less productive,” Huang says. “To the contrary, for any organization whose revenue model is based on donations, their survival depends upon people feeling a sense of responsibility to others, and that often means relying upon people who subjectively feel older.”

As Huang observes with a laugh, “As I get older, I find myself gravitating toward ideas that explore the potential benefits to feeling older.”