Women and people of color are not well-represented in science, technology, engineering, and math (STEM) jobs. Despite the fact that more women graduate college than men, they occupy only 35% of the jobs in the science and engineering workforce. Further, Black and Latino students comprise less than 20% of those studying science- or math-based disciplines and less than 5% of the STEM-based workforce. And beyond these disparities, interest in such fields lags behind what is needed for our future workforce. 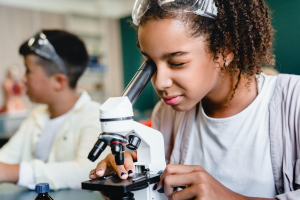 How can we drive more interest in STEM?

Compared to the liberal arts, STEM fields are often seen as being focused on individual curiosity and problem solving rather than our social lives and connections to other people. But a new study finds that if math is taught in a more social way, we might be able to shift this perception and get students more engaged in the field.

Researchers surveyed eighth-grade students at a handful of (mostly private) schools across the U.S. to see how much their math classes exemplified the value of communality, which is related to engaging with and helping people. Women and underrepresented groups tend to be more committed to communal values and goals, especially as they get closer to adulthood.

They measured communality by asking students how much their math classes involved collaborative learning, as well as how much what they were learning could be connected to helping others. For example, a teacher might show how math helps determine how to build a bridge that will not collapse, or the proper amount of healthy foods someone needs in order to thrive. The researchers then looked at how these factors influenced students’ grades, their participation, and how they felt about the importance of math in their lives at the end of the school year.

What they found was that, when classes felt more communal, students tended to engage more and perform better in them. Interestingly, making math feel socially relevant to students appeared to be even more important than collaborative work; both seemed to boost performance and participation, but only making that connection to helping allowed students to see the importance of math in their lives more clearly. This is surprising, since peer relationships are so important during adolescence, but it points to how crucial it is for students to be able to relate math and other STEM subjects to the world around them.

The researchers also attempted to explain how this style of teaching helped. They found that both collaborative work and making math socially relevant, and in particular the latter, increased students’ sense of belonging, confidence, and motivation. And these increases contributed to higher math scores, participation, and feelings that math was important in their lives.

These last analyses also unearthed one of the most compelling results: Seeing the social relevance of math led to a greater sense of belonging, which then led to improved grades—specifically for students of color, not white students. This suggests that underrepresented students in particular may feel more at home in their math class when math feels practical, and this can have a profound impact on their success.

The other interesting finding was that teaching math more communally seemed to benefit girls and boys equally. This may be because eighth graders are not yet at the age when boys tend to gravitate away from communal values while girls tend to gravitate toward them.

These findings suggest that we can do a lot to change the perceptions that society has about STEM fields, and who is best suited to be in them. This starts by helping young students see their values embedded in STEM classes, and creating opportunities for social connections within these subjects—approaches that are common in social-emotional learning (SEL) programs. As the authors put it, “A clear future direction is to apply lessons learned from the present findings to K–12 schools by designing educational interventions that amplify social relevance of STEM and collaboration.”

When I was in high school, I felt I had to choose between a STEM career that would satisfy my curiosity about the world, or a liberal arts career where I would get to work with and help people. Hopefully students in the future will be able to see a new choice: both.