As we get older, we become more prone to serious illnesses, like heart disease, dementia, and cancer. We may become frailer and suffer falls and broken bones or other complications, which ultimately cut our lives short. 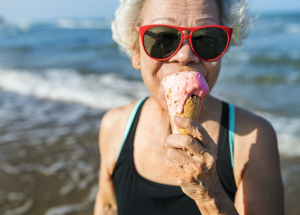 If we want to live a long, healthy life as we age, it’s important to keep physically healthy by eating right, exercising, and getting enough sleep. But what about our psychological health? Does that matter for our longevity?

A new study suggests it does.

In this study, researchers drew survey data from over 21,000 adults over 50 who’d participated in the University of Michigan’s Health and Retirement Study, where every four years they were asked to report how happy, optimistic, and satisfied with their lives they were, and how much they experienced social support from others and a sense of purpose—all indicators of good psychological health.

Between 2006 and 2020, nearly 5,000 of them died, giving researchers a chance to see how psychological health may have contributed to their longevity. First, the researchers ruled out other things that could have shortened someone’s lifespan, like their gender, race or ethnicity, marital status, education level, and socioeconomic status as a child. They also considered if people drank alcohol or smoked, had mobility issues, or had pre-existing health conditions (like high blood pressure or cancer)—all of which can affect our risk of death.

Then, they compared the psychological well-being of people who had died to people the same age who were still living, averaging their well-being scores prior to their deaths. They found that those who lived had better psychological health—even after controlling for those factors that increased their risk of early death.

“How people feel about the way their life is going is important for their health and survival,” says lead researcher Jennifer Boylan. “Doing things that promote these good feelings and these abilities to function well and effectively have tangible, significant effects on how long someone lived.”

Boylan and her colleagues also figured out how much longer someone might live if they had greater psychological health. People with significantly higher than average life satisfaction, positive feelings, purpose in life, or optimism at age 50 lived an average of five to eight additional years—an advantage comparable to what highly educated people enjoy.

“Achieving high levels of these aspects of well-being have really important impacts on people living longer and healthier lives,” says Boylan. “Their presence is worth focusing on more than it has been.”

How well-being increases longevity is not known for sure. But Boylan says people who are psychologically healthy tend to take better care of themselves by being physically active, sleeping better, and engaging in more preventative health care. Also, being mentally healthy might help people cope better with stress, reducing the harmful physiological responses (like increased heart rate or blood pressure) that come with it.

The aspect of well-being that was most protective was having a purpose in life. Boylan says this is intriguing, as purpose in life is not necessarily about stress reduction and may, in fact, require facing challenges.

“Sometimes things that give us purpose and meaning might not feel good 100% of the time, but they still tend to be good for us in terms of our health outcomes,” she says.

Having greater social support was the least important contributor to longevity in the study—a finding that seems to contradict past research and surprised Boylan. But, she says, this may have been due to the way she measured social support, neglecting to ask about difficulties within supportive relationships (like strain, criticism, or conflict) that could dampen their helpful effects.

Otherwise, many of her findings are in line with past research showing a connection between psychological health and longevity. In fact, optimism, purpose, and happiness have all been tied to living longer, suggesting we may want to cultivate these in our lives.

“These might be good things to target,” says Boylan. For example, she mentions how public policies and individual practices like gratitude, mindfulness, and social skills that foster supportive relationships could help people lead happier lives—and extend them, too.

“Regardless of which aspect of psychological well-being you target, there might be really tangible mortality benefits from achieving high levels of it,” she says. “We should be promoting these in everyone’s life.”