Many terrible things happened in 2013. But concealed within each awful event was at least some kernel of courage or grace.

This past year especially provided us with many models of heroism. From the helpers of the Boston Marathon bombing to activists standing up for human rights in Bulgaria and Pakistan, 2013 gave us countless images of the good in humanity. Here are eight of them.

April: The Hero of the Boston Marathon 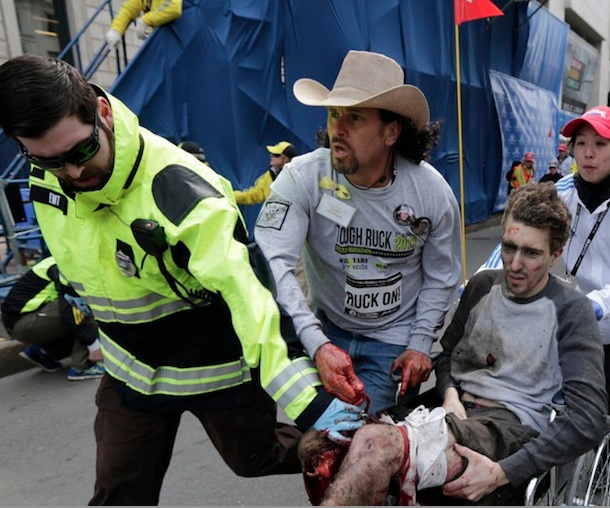 This image of the cowboy-hat-wearing Carlos Arredondo came to represent the hundreds of acts of heroism committed in the wake of the Boston Marathon bombing in April. But his stature grew when the public learned that Arredondo’s son had been killed in Iraq in 2004, and that this tragedy had spurred Arredondo to a life of peace activism. As Costa Rica-native Arredondo told the Washington Post:

“You have to get out of that shock” that comes with tragedy, he said. You have to act. “In this case, my instinct was to be a humanitarian.”

Watch and read Philip Zimbardo explore what makes a hero. 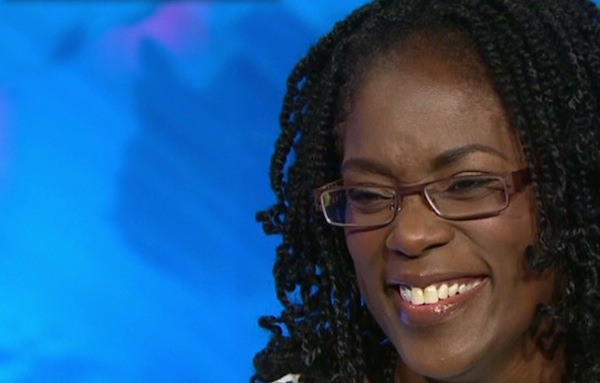 On August 20, Michael Brandon Hill walked into an Atlanta school carrying an AK-47, but bookkeeper Antoinette Tuff did not run away. Instead, she tried to build a bridge with the troubled young man by sharing stories of heartbreak from her own life, like a recent divorce and a son with multiple disabilities.

It’s going to be all right, sweetie, I just want you to know I love you, though, OK? And I’m proud of you. That’s a good thing that you’re just giving up and don’t worry about it. We all go through something in life. No, you don’t want that. You going to be OK. I thought the same thing, you know, I tried to commit suicide last year after my husband left me. But look at me now. I’m still working and everything is OK.

Hill put down his gun and surrendered to police.

October: One Man Stands Up to Violent Mob 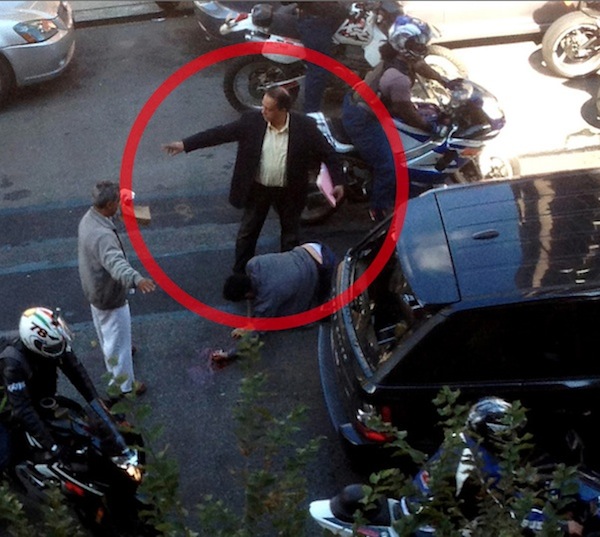 Sergio Consuegra was coming home from church in New York City when he saw a crowd of motorcyclists, part of a large rally, swarm Alexian Lien’s SUV, smash the windows, pull Lien from the vehicle, and start beating him with their helmets.

Consuegra didn’t know that minutes before, Lien had run over one of the bikers. He only saw another person in trouble, and the bikers pulling his wife out of the car, while the couple’s two-year-old child cried in the back. That’s when Consuegra stood over Lien’s body and stood up to the violent mob, by himself, while dozens of others looked on. As he told ABC News:

At that moment I said oh I gotta do something, there’s a famly in danger here. And they’re gonna get killed, nobody intervened in this situation and nobody stepping in… I felt tense. I felt that God was with me there. I said stop it, let it go. And then somehow one of them moved started moving and I said yeah this is enough now.

Learn more about the psychology of the bystander. 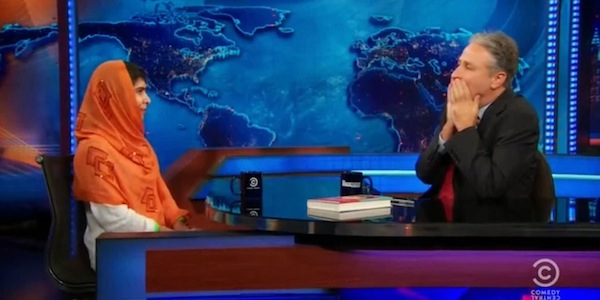 One year before appearing on The Daily Show with Jon Stewart, a Taliban gunman stormed a school bus in Pakistan’s Swat Valley and shot Malala Yousafzai in the head and neck. Her crime? She was a girl, getting an education—a forbidden combination according to the Taliban’s reactionary interpretation of Islamic law.

Now sixteen years old, Malala survived, healed, wrote a memoir, and launched a campaign for the rights of girls and women in Pakistan. Her appearance on The Daily Show was a sensation, and turned Malala into a symbol of modest, intelligent courage. She described learning that the Taliban had targeted her and deciding to not back down from going to school. As Malala told Stewart:

I started thinking about that and I used to think that the Tali [Taliban] would come and he would just kill me, but then I said if he comes, what would you do Malala? Then I would reply to myself Malala just take a shoe and hit him, but then I said, if you hit a Tali with your shoe, then there would be no difference between you and the Tali. You must not treat others that much with cruelty and that much harshly, you must fight others, but through peace and through dialogue and through education. Then I said I would tell him how important education is and that I even want education for your children as well and I would tell him, that’s what I want to tell you.

Malala was nominated for the Nobel Peace Prize and she won the European Parliament’s Sakharov Prize for Freedom of Thought.

Read more about the roots of moral courage. 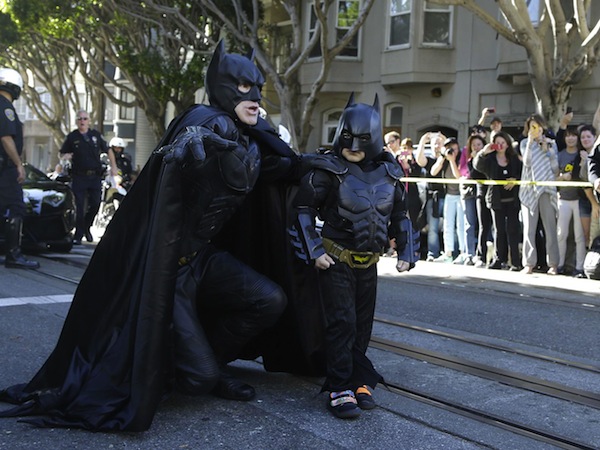 Miles Scott has suffered from leukemia since he was just 18 months old. Now five, he’s become an ardent admirer of Batman. In November, the Make-A-Wish Foundation transformed San Francisco into Gotham City and turned Miles into “Batkid.”

The day started with San Francisco’s Police Chief Greg Suhr appearing on TV and pleading for Batkid to save the city from the Riddler and Penguin. The costumed Miles and his baby brother—who was, naturally, dressed as Robin—swung into action. They raced through the city in the Batmobile (with an adult-sized Batman driving), saving people and capturing supervillains, whom he turned over to chief federal prosecutor Attorney Melinda Haag and FBI agent David Johnson. For his heroic efforts, San Francisco’s mayor gave Batkid the key to the city.

Batkid involved thousands of volunteers, inspired millions of people, and provoked a wave of donations to the Make-A-Wish Foundation.

Read about why giving feels good. 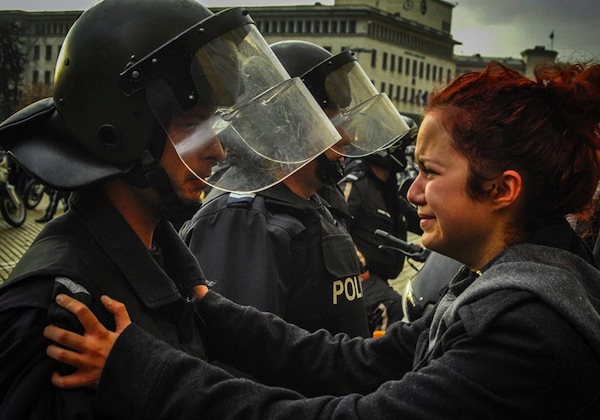 In May, Bulgarian students launched a movement against government corruption, and in November protesters descended the capital city Sofia. When riot police moved in, most demonstrators responded nonviolently.

In this photograph, which went viral on Facebook, a student had been begging the policeman not to hit her or any of her friends. Then, according to one account from Bulgaria, “the policeman started crying as well and he said to her: ‘You just hold on girl.’” Another account claims:

This particular policeman was trying to help protesters and keep them from being beaten. He was an exception. The girl thanked him and he replied, “Just hold on, everything will be alright.” That’s why she’s crying.

Either way, this photograph stands as the year’s best image of nonviolent protest.

Read a Q&A with Joshua Greene about how to close the gap between “us” and “them.” 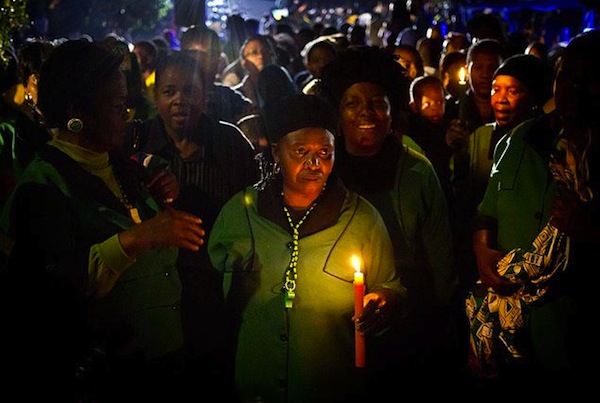 On December 5, Nelson Mandela died. He led the fight to end government-sanctioned racial “apartheid” in South Africa, winning the Nobel Peace Prize in 1993. But that thumbnail description does not even begin to capture why Mandela was so important to people all over the world. His organization, the African National Congress, did employ violence in the multi-decade battle to overthrow South Africa’s white supremacist regime, but Mandela never stopped working for peaceful reconciliation between that country’s divided ethnic groups.

“I am one of the countless millions who drew inspiration from Mandela’s life,” said President Obama at the White House. “So long as I live, I will do what I can to learn from him.” He added, “Let us pause and give thanks for the fact that Nelson Mandela lived.” 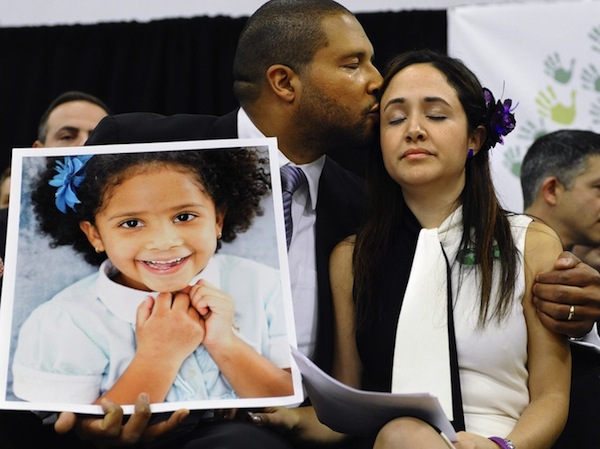 On the first anniversary of the Sandy Hook Elementary school shooting, Nelba Márquez-Greene chose to embrace gratitude, love, compassion, and forgiveness. Showing incredible strength, she talked about pointing the spotlight of her attention on the good times she shared with 6-year-old daughter, Ana Grace, who was killed in the shooting.

“Most days still bring unbearable pain,” reported NPR. But on the anniversary of the shooting, Márquez-Greene talked only about trying to hold onto memories of the good days with Ana. “It is what brings me great comfort and great joy,” she said. “And that is what gives us strength.” She added:

People say to me, “I can’t believe what that monster did to your baby!” Well, you know, it’s true something terrible happened to Ana, and that was a terrible day. But if we even use that language, “monster,” if we talk like that, we already make a separation between us and them. And it doesn’t work that way.

You can also read about how gratitude can help you through hard times and how to turn your brain from anger to compassion.