Ireon Roach had just turned 10 when Changing Worlds came to her elementary school in Englewood, a suburb of Chicago. The literacy and arts program encourages kids to learn about their own heritage and the heritage of their classmates through oral history, writing, and art.

Ireon’s mother, Krystal Peters, soon noticed a change. Ireon developed a genuine interest in other cultures, and wanted to know more about her own. Not long after she completed the program, she moved to a specialty school with students from diverse cultural backgrounds—far more diverse than her previous school.

“Because she had gone through the program, it took off the edge for her,” Peters says. “It made her appreciate people who were different from her, and now she has all kinds of friends.” 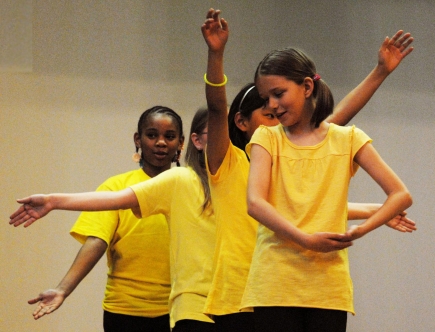 The Changing Worlds arts and literacy program encourages children to learn about other cultures through dance and other performing arts. © Changing Worlds

In short, Changing Worlds teaches empathy—the ability to understand how someone else feels and to experience his or her emotions as your own.

And according to a panel of experts, the program is doing an exceptional job: Last month, judges selected Changing Worlds as one of two winners of an unprecedented international competition honoring leaders in empathy education.

The competition, hosted by the Ashoka Foundation, solicited entries from projects and programs that are developing innovative ways to teach kids empathy. Called “Activating Empathy,” it was one of the first major projects of a larger Ashoka initiative, Start Empathy, which is based on the idea that kids must learn empathy if they are to tackle the problems of the 21st century.

“In terms of where we are culturally and as a changing world, empathy is more essential today than it has been in any point in history,” says Lennon Flowers, who is helping to run the initiative (her official title at Ashoka is “change manager”). “What are we educating kids for? I would suggest it’s probably not the ability to take tests for the rest of their lives, but rather the ability to work with others and collaborate effectively in the future.”

That idea has been building momentum. President Obama consistently advocated empathy during his 2008 presidential campaign and famously said it was one of his criteria for a Supreme Court justice. Over the past few years, several big books have argued for the critical importance of empathy in the world today, perhaps most notably Jeremy Rifkin’s The Empathic Civilization, which Ariana Huffington championed on the Huffington Post, writing,  “Empathy is the one quality we most need if we’re going to survive and flourish in the 21st century.” At the same time, some researchers have uncovered evidence that empathy is on the decline in the United States, though in recent years, other scientists have identified empathy’s genetic basis and its ability to help us overcome differences.

While teaching empathy in schools isn’t a novel concept, the practice has been gaining attention in the wake of high-profile incidents of bullying and youth violence. Educator Mary Gordon’s pioneering Roots of Empathy program, which has been shown to boost emotional intelligence and reduce aggression, has been expanding around the world, lauded by the Dalai Lama and others. Anti-bullying educational materials accompanying this year’s acclaimed documentary Bully emphasize the importance of empathy.

Ashoka tried to tap into this momentum in the education world through its “Activating Empathy” competition.

“The goal of the competition was to really understand what’s out there in terms of empathy education—we weren’t sure if we’d get more than 30 applications,” says Flowers. “And what we heard was this powerful battle cry from individuals and programs around the world saying, ‘Yes! This is me! This is what I’ve been doing for years,’ and in some cases, decades.”

To the surprise of Flowers and her Ashoka colleagues, the crowd-sourced contest received more than 600 entries over three months. The entrants ranged from a high school arts program in China to after-school dance and community sports programs in the United States, all with the stated goal of fostering kindness and understanding.

“Through this competition, we’ve identified the leading innovators who are cultivating empathy in schools, using it to improve the learning environment and equip kids with the skills they really need to succeed,” says Flowers. “As a result, we now understand who the big players are, and what practices are working.”

Ashoka announced 14 winners in all, two of which, including Changing Worlds, were selected by a panel of judges, and one of which was selected by the general public. The other winners were selected by corporate and foundation sponsors. All received cash prizes, totaling roughly $115,000.

How do you teach kindness?

The other Judges’ Award winner was No Bully, a non-profit that uses a variety of methods to help educators reduce bullying in schools, including an “empathy-building action plan,” where instructors teach respect for differences across an entire class or grade.

No Bully grew from the insight that punishing bullies isn’t an effective way to stop harassment, says its founder and executive director, Nicholas Carlisle. Instead, Carlisle says he tried to craft strategies for teaching empathy as a way to promote deeper change in schools.

One of the No Bully approaches—creating a “Solution Team,” where students talk their problems out through facilitated discussions—was found to be effective in reducing bullying 88 percent of the time, according to a 2012 independent evaluation. Specially, bullied students felt safer after the first team meeting, and the overall situation was improved or resolved after three months.

It is success stories like this that Ashoka is trying to capture, catalog, and analyze through its broader Start Empathy initiative. In May it launched Start Empathy’s website; according to Flowers, the purpose of the site is two-fold: first, to feature effective models for teaching empathy—whether through schools, programs, or other means—and second, to evaluate how and why these methods are effective, translating those lessons into usable tactics for teachers and parents. (Note: The Greater Good Science Center is partnering with Ashoka on some aspects of Start Empathy.)

The Start Empathy initiative emerged out of Ashoka’s fellowship program, where Ashoka funds “social entrepreneurs” who have trailblazing ideas to improve fields like public health, civic engagement, and education. Empathy was a common thread identified as a key to success among many of these past fellows, says Lauren Parnell Marino, an Ashoka communications manager who helped spread word about “Activating Empathy.” Now Ashoka is trying to zero in on cultivating empathy as a core skill—not just among their fellows but among as many children as possible.

Dacher Keltner, a professor of psychology at the University of California, Berkeley, and one of the “Activating Empathy” judges, attributes the attention to empathy to a broader cultural change. Keltner, who is also the faculty director of the Greater Good Science Center, says that for the past three decades, Americans have grown more materialistic and narcissistic, likely starting with the ideological shift in the late 1980s that extolled greed and selfishness.

“And now we’re looking for something new,” he says. “And we’re realizing that all these good programs—which are based on play, and teaching children kindness, and things like that—all come down to empathy.”

Just wanted to let you know I’ve interviewed about
15 of the Ashoka contest applicants and winners
for our
Empathy Conference: How to Nurture, Foster and
Teach Empathy in the Education System?
you can see them here.
http://j.mp/JNDbGl

this is part of the
International Online Conference on:
How Can We Build a Culture of Empathy and
Compassion?
http://j.mp/KGlB8O

Also of interest may be the
Empathy and Education Magazine
“The Latest News about Teaching Empathy and
Compassion in the Schools and the Education
System”
http://scoop.it/t/empathy-and-education

Warmly
Edwin Rutsch
Director: Center for Building a Culture of Empathy
A portal for resources and information about the
values of empathy and compassion.
http://cultureofempathy.com

A very timely post. At a time when natural borders are almost gone and one gets to interact with a lot of other people from various countries, communities and walk of life, it becomes very essential that we understand and respect one another.

Sadly in many countries, politicians misuse this for their own good. But at the ground level we, as individuals, need to be aware of this.

Thank you for a lovely end to my day.