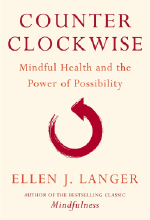 In Counterclockwise, Ellen Langer, a renowned social psychologist at Harvard, suggests that our beliefs and expectations impact our physical health at least as much as diets and doctors do. She argues that, as we grow older, our physical limitations are largely determined by the way we think about ourselves and what we're capable of. As a result, we need to challenge our socially constructed, implicitly learned assumptions around health and aging in order to take control of our own well-being.

For evidence, Langer draws on her 30 years of pioneering mind-body research, including her 1979 "Counterclockwise" study in which eight elderly men lived in a residential retreat that recreated the social-physical environment of 1959. After one week sequestered in this virtual 20-year journey back in time, all eight participants showed marked improvements in their hearing, memory, dexterity, appetite, and general well-being. They even looked younger to outside observers who saw photos of them before and after the experiment.

Langer cites other research that has made similar findings. In one study, for instance, 650 people were surveyed about their attitudes on aging. Twenty years later, those with a positive attitude had lived seven years longer on average than those with a negative attitude. (By comparison, researchers estimate that we extend our lives by four years if we lower our blood pressure and reduce our cholesterol.) In another study, participants read a list of negative words about aging; within 15 minutes, they were walking more slowly than they had before.

"That beliefs might be the most important determinant of life span goes against the grain of what we 'know' to be true," writes Langer. Indeed, by considering whether limbs can regenerate or paralysis be reversed, Langer tries to push science beyond what we know, to discover what might be.

At times, though, Langer's research seems surprisingly thin–studies with small sample sizes, not widely replicated–and the book lacks concrete suggestions for how to put her ideas into practice. Still, since I finished reading Counterclockwise, I've found myself constantly sharing her ideas about the "psychology of possibility" with colleagues and friends. And I challenge myself daily to think more optimistically about my own health and aging than I ever could have imagined before.

Linda Graham, MFT, publishes an e-newsletter, Healing and Awakening into Aliveness and Wholeness, archived at www.lindagraham-mft.com.

I think motive for living is most important for meaningful life.How much is our life know that is impossible,we can die any time, but what may life we have ,we must live it to achieve some motive.Without any motive life is worthless.Belief on some motive is more important than meaningless belief is harmful or asy useless.
——-