Happiness research has found that getting married gives spouses a happiness boost—but only temporarily, for roughly two years. And, on average, their satisfaction with their marriage follows a slow but steady decline over time. How to stop this downward trend? 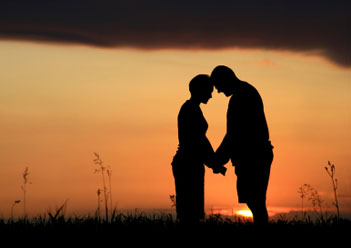 Research does suggest that marital therapy is one way, but that can be pricey and time-consuming. A new study, however, offers another option—one that could take less than half an hour for impressive results.

In the study, to be published in the journal Psychological Science, 120 married couples completed questionnaires every four months, evaluating the levels of love, intimacy, trust, passion, satisfaction, and commitment in their relationship. Every four months, they were also asked to detail the most significant disagreement they’d had with their partner over the preceding four months, and rate how distressing it was.

After one year, half of the couples were asked to complete a seven-minute writing task, where they had to take a neutral, third-party perspective on the recent conflict they’d had with their spouse, reevaluating their disagreement from an outsider’s perspective with the best interests of both parties in mind. In their writing, each spouse also had to identify obstacles to resolving the disagreement, explain how they would navigate and overcome those obstacles, and consider how doing so would benefit their relationship.

Over the first year, both groups of couples experienced the typical decline in marital satisfaction; for the couples that didn’t do the writing exercise, that decline continued in the second year of the study.

The couples that did complete the exercise, however, were protected against that drop in marital satisfaction—that is, the happiness of their marriages was relatively stable over the course of the second year, which the researchers attribute to the writing exercise.

By taking that neutral, third-party perspective, the researchers believe, the spouses were able to realize how their conflict surfaced negativity between them. They were able to concentrate less on blame or difference in opinion and detach from their negative emotions in order to arrive at a mutually beneficial resolution

The study suggests that trying to separate oneself from disagreements and take a more objective perspective can make spouses more resilient in the face of marital conflict. And as this subtle shift in thinking keeps their conflict in check, spouses will see significant gains in their marital satisfaction.

While it can be challenging to develop these cognitive skills of “reappraisal,” the study’s authors, who are researchers at Northwestern and Stanford, argue that the benefits of this challenge far outweigh the costs.

“Given the major health and well-being correlates of marital distress—both for the spouses themselves and for their children and broader social networks,” they write, “spending 21 minutes a year reappraising conflict appears to yield a spectacular return on investment.”

After 41 years, we have never been happier. 41 years ago, I
promised God that if he convinced my beauty to marry me, I
would dedicate my life to making her happy. So, far, so
good!