Last week, the best-selling author and popular blogger Penelope Trunk declared divorce “immature and selfish.” She claimed divorce is “nearly always terrible for kids” (and “your case is not the exception”); that it is a sign of mental illness (specifically, of Borderline Personality Disorder); and that it is something that “dumb people” do at higher rates than well-educated ones.

Trunk tends to base most of her writing, for her blog and for national media outlets like CNN, on pretty solid scientific research, so I was surprised by this post. That said, she’s most famous for blogging about highly personal and controversial topics, and so this might be, in part, a publicity stunt.

Unfortunately, her post is freaking out thousands of people who are doing their best to raise happy and well-adjusted children. My former husband even asked me, in a panicky whisper outside of our teacher conference, if our own much-deliberated and highly-agonized-over divorce could have damaged our kids in ways we were not yet seeing several years out.

There is no denying that divorce is pretty tough on everyone involved. When you look at the general population, about 10 percent of kids have behavioral or school-related problems, but about 20 percent of kids whose parents divorce have these problems.# While it’s true that 80 percent of kids with divorced parents are doing fine, divorce seems to double the risk that kids will have problems. Does this mean that unhappily married folks actually should stay together for the kids?

Are you wondering if you are in a high-conflict or distressed marriage?  Violence and abuse make a relationship high-conflict, of course; researchers also tend to classify relationships characterized by contempt, stonewalling (when one person ignores another’s attempts to engage), criticism, or defensiveness as distressed. 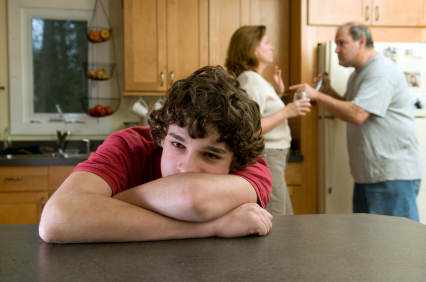 (The Wallerstein book that Trunk cites as evidence that “divorce is nearly always terrible for kids,” was, by the way, debunked ages ago. Wallerstein’s research looks only at children whose parents were being treated for mental illness, and so the results aren’t generalizable to all families. That study got so much press, however, that it inspired a plethora of high-quality research that is actually quite useful for helping us understand how or why divorce might hurt kids.)

“Does divorce harm kids?” is not actually the right question, although we ask it all the time. A better question is this: “What circumstances make divorce harmful or beneficial to kids?” And the answer is that, on average, divorce actually helps kids when it ends an unhappy, high-conflict marriage.

There’s another important factor: The quality of the divorce itself. The difference between a “bad” and “good” divorce can be critical for kids. Researchers refer to divorce-related problems as “post-disruption effects,” and studies of them are numerous and complicated. Post-divorce problems—such as losing contact with a parent, or financial hardship, or having parents who continue to fight bitterly—tend to accumulate. When they do, children benefit substantially from therapy and other forms of support.

So it isn’t that divorce never causes problems for kids. Children whose parents divorce actually do tend to have more problems than children whose parents stay together—but divorce may often be a symptom of a bigger problem rather than the cause of it. And the negative effects of divorce, on average, are surprisingly small, especially compared to some of the other things that can go wrong in childhood.

I would never call a process as difficult and painful as divorce “immature,” as Penelope Trunk did. I think divorcing well—in a way that won’t scar the children deeply and permanently—takes great maturity and courage—which, of course, not everyone has.

But is divorce selfish? Not if you are in a distressed or high-conflict marriage. If you are, but you are staying because you think it would be selfish to leave, don’t leave for yourself. Do it for your kids.
—-