“Religions often divide the world. What unifies us are our emotions.”

This statement, which world-renowned psychologist (and Greater Good editorial board member) Paul Ekman recalls hearing from the Dalai Lama at a conference in 2004, could serve as the tagline for Emotional Awareness, a compilation of three separate but related conversations between the two men. 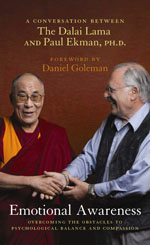 Of course, as Ekman points out in the introduction to the book, our emotions can fuel violence and divisions. But it was their shared and profound interest in the nature of emotion that brought together the Dalai Lama, the Nobel Peace Prize-winning spiritual and political leader, and Ekman, a non-practicing Jew who professes skepticism for all religions. They devote much of their dialogue to discussing how people can cultivate compassion, minimize the harmful effects of emotions like anger, and achieve balance in their emotional lives.

Their conversation draws on both Eastern philosophy and Western scientific research, identifying places where the two converge and illuminate one another. There’s something incredibly refreshing about the playful and open-minded way the two men go about their discussion, looking for common ground without sacrificing their skepticism or willingness to challenge one another. While they sometimes debate esoteric points, their back-and-forth engages the reader to consider some of the most vital and complex moral issues that confront humanity.