In 1942, Balwina Piecuch, a non-Jewish Polish woman, sheltered 12-yearold Shmulek Oliner from the Nazis, saving the Jewish boy’s life after the Nazis had killed his entire family. Shmulek later emigrated to the United States and is now Samuel Oliner, sociologist and director of the Altruistic Personality and Prosocial Behavior Institute at Humboldt State University. Oliner has dedicated his life to understanding the roots of altruistic acts like Balwina’s—“to discover what leads to caring and compassion, to name what gives an individual a sense of social responsibility, and what it means to put the welfare of others alongside one’s own,” he writes in Do Unto Others, his latest book. 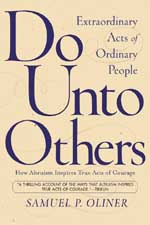 Much of Oliner’s previous research has tried to identify the motivations of rescuers during the Holocaust, but here he broadens his scope to include a range of altruists: rescuers at the World Trade Center and the Pentagon on September 11, hospice volunteers, and philanthropists, among many others. Although he examines “moral exemplars” like the Dalai Lama and Mother Teresa, Oliner is especially concerned with the motivations of ordinary people who found themselves capable of profound acts of courage, compassion, and self-sacrifice. To this end, he draws upon hundreds of stories and interviews, like that of a tractor-trailer driver who risked his life to save a stranger from a burning van, and of a man who chose to die in the World Trade Center rather than let a wheelchair- bound friend and co-worker die alone. Oliner succeeds not only in illustrating the human potential for goodness, but in elucidating how such goodness can be taught and learned. Time will tell whether the events of September 11 truly provided contemporary America with “a new vocabulary of heroism,” as Oliner claims. But with its powerful stories and careful analysis, Do Unto Others makes a convincing case for the human capacity for altruism in any context.