The latest work from best-selling author Jon Kabat-Zinn reiterates and expands upon the themes of his earlier books: that Buddhist-based meditation and mindfulness techniques can relieve stress and stimulate healing. By mindfulness, Kabat-Zinn means “our capacity for awareness and self-knowing”—it’s the practice of paying closer attention not only to the world around us, but to the workings of our own minds and bodies. A molecular biologist and professor emeritus at the University of Massachusetts Medical School, Kabat-Zinn has spent most of his career exploring the mind/body frontier via his groundbreaking Stress Reduction Clinic and the Center for Mindfulness, both housed at the medical school.

Kabat-Zinn writes his book in bite-sized chapters that are grouped into separate parts. While there is a section on the nuts and bolts of different meditation styles, he focuses most of the book on the senses. Kabat-Zinn is mainly concerned with how we can train ourselves to become more aware of our sensory experiences, and he emphasizes the interrelationship between how we sense our internal emotions and how we experience the external world. He sees mindfulness as a way of understanding ourselves better so that we may also better understand those different from us; to him, then, mindfulness is a means to transforming the world from the inside out. His mini-essays serve to demystify mindfulness for readers and identify the benefits it can bring them. 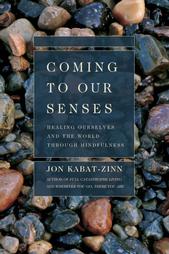 Kabat-Zinn also mixes in science, both in describing neurological processes that occur during meditation and in presenting controlled studies of meditation practices. In one of his studies, for instance, patients with psoriasis who listened to a customized meditation tape while undergoing ultraviolet-light therapy healed four times faster than those who didn’t listen to the tape. In another experiment, in collaboration with University of Wisconsin, Madison, psychologist Richard Davidson, biotechnology workers who went through Kabat-Zinn’s Mindfulness-Based Stress Reduction program registered more activity in the portion of the brain devoted to positive emotions than nonmeditating workers. Kabat-Zinn also reports on Davidson’s prior research on Tibetan lamas, which has shown uncommonly high activity in the positive-emotion areas of their brains.

In a nod to the jittery post-September 11 world, Kabat-Zinn widens his lens to include an entire section on politics. Rather than a good-versus-evil political dichotomy, he suggests “a less dualistic way of seeing” our adversaries. In this alternate universe, he writes, “we might find ways ... to act wisely and firmly to move things in a direction of healing. ... In a word, a politics of wisdom and compassion, nurtured through mindfulness and lovingkindness.” Right now, that doesn’t seem possible—but then, the field of integrative medicine didn’t seem possible 30 years ago, either.

At its best, Kabat-Zinn’s writing style is like a mindfulness tape in print, bringing the reader to a meditative state of awareness through its calm reiteration of key points. All too often, though, a single sentence takes up a lengthy paragraph, making the 631-page book about a third longer than it needs to be.

Nevertheless, the language is always accessible and never condescending to the professional and lay reader alike. In Coming to Our Senses, Kabat-Zinn fans will find more paths to mindfulness, and newcomers will find a gentle, knowledgeable guide.