Why do some people find meaning, purpose, and fulfillment in life while others do not? Jonathan Haidt’s book offers a detailed answer to this question. His “happiness hypothesis” aligns philosophical, religious, and theoretical texts with recent scientific insights. And he casts a wide net, drawing from psychology’s “attachment theory,” sociological research, and recent developments in the neuroscience of emotion. Haidt uses this research to illuminate modern truths in ancient and classic thinking—from Buddhism to Benjamin Franklin, the New Testament to Nietszche, Plato to Freud—showing how the field of positive psychology is tapping into something universal and timeless. 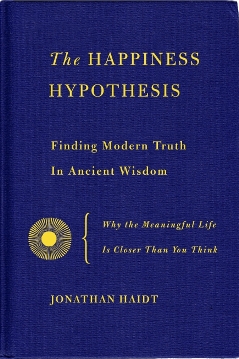 This may sound like a self-help book, but Haidt makes a point of distinguishing his theory from the standard self-help perspective. The problem with much pop psychology, he argues, is that it places too much importance on conscious thought and the analytical mind. Self-help books often imply that if we’re just self-aware enough in our daily lives, we can use our intellect to override our emotional instincts, willing ourselves to be happy. Instead, Haidt argues that we can best promote happiness and well-being through the emotional and unconscious parts of our brains. This could mean cultivating habits such as daily meditation—or using anti-depressant drugs such as Prozac. Meditation and medication are more powerful than the momentary insights that may come from, say, a particularly inspiring episode of Dr. Phil because they are emotionally rather than intellectually driven. (This is why New Year’s resolutions don’t often stick.)

This book is about the “origins of positive psychology in ancient wisdom,” and it’s also a guide to how we can apply what scientists know about the mind to find ever greater happiness. Along the way Haidt offers an interpretation of the culture wars in the United States, some keys to understanding romantic relationships, and insights into how Western concepts of virtue and morality have narrowed to the point that they may well be costing us happiness and well-being. The Happiness Hypothesis is a rare achievement: a book that is both scientifically sound and well-written. This academic masterpiece reads like a novel and is at the same time a genuine moral achievement.