“Growing Up, Einstein saw his father struggle to provide for the family. Looking for work, Einstein’s father moved the family several times for different jobs. This meant that Einstein had to change schools more than once during his childhood. Moving between schools was very difficult. Einstein not only felt out of place, but it was also challenging for him to catch up to what his new class was working on.” 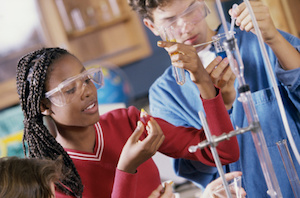 This story can’t be found in your regular science textbook, but maybe it should be: According to a new study published in the Journal of Educational Psychology, reading stories about the struggles of famous scientists is more beneficial for students’ grades than reading about their achievements. The way we currently teach science—by focusing on great feats of knowledge by larger-than-life geniuses—may not be the best way to encourage students to pursue scientific careers.

Researchers at Columbia University and the University of Washington recruited just over 400 freshmen and sophomores at a low-income, mostly non-white high school. The students read stories about Albert Einstein, Marie Curie, or Michael Faraday, just 800 words centering on one of three themes:

After six weeks, the researchers checked in with teachers to see how the students were doing in science class.

The researchers initially thought that reading stories of struggle would transform the way students thought about intelligence and effort; instead of believing you have to be born with scientific genius, perhaps the stories would help them recognize the importance of persistence and hard work (an attitude called a “growth mindset”). But this didn’t seem to be the case: Students’ beliefs about intelligence and effort didn’t actually change during the course of the experiment.

“We suspect that struggle stories revealed scientists’ vulnerability,” the researchers write, “which in turn creates a sense of connection between the students and scientists who are often viewed as being untouchable.” And that may make it easier to see them as role models.

A 2012 study in Taiwan found similar results: When students read about scientists’ struggles, they saw them as individuals (similar to themselves) who had to overcome obstacles; when they read about achievements, they saw scientists as special people with rare, innate talent. The students in this older study who read about struggles performed better on a task in the laboratory; the new study extends the findings to a real classroom setting.

By its very nature, science involves lots and lots of failure: coming up with hypotheses, testing them, and then starting all over again. It could be the case that the way we currently talk about scientists doesn’t honor that process—and may be hurting students. “Scientists are often portrayed as unusually smart, White males who solve problems without much effort or help from others,” the researchers explain.

The good news is that this experiment was quite simple—and easy to insert into curricula: An 800-word story—two double-spaced pages—can have a positive effect on students’ grades. If we want to educate a future generation of great scientists, we can start by changing the way we talk about the great scientists of the past.